Castlevania II is a strange and pleasing thing

[Destructoid user Moths is here to suggest that the world could use more games like Simon’s Quest, and for as bewildering as it can be even with a well-laid-out walkthrough, I can’t say I disagree. It’s a strange gem, one that sticks with you. -Jordan]

I recently replayed Castlevania II: Simon’s Quest for the first time in years. Coming into it a little older and a lot more pretentious, I was struck by what a special kind of game it is. It is a failure, yes. There have been plenty of those since 1987. But it is a failure that had stood the test of time. One that has earned love and a place in history largely on the merits of its failings. This honestly hits me at a personal level. I can only dream of one day becoming an interesting failure.

Simon’s Quest falls between the original Castlevania and Castlevania III: Dracula’s Curse. It represents a wild detour in the progression between those two games. It moved the focus away from a traditional action-platforming style and onto adventure elements, with progress being gated more by exploration and puzzles than by challenge. There’s a day/night cycle, and rudimentary experience and inventory systems. Grinding for currency is a relevant part of the game, but getting knocked into pits by medusa heads is not. Any player with the knowledge of how to do so can stomp Dracula to pieces in a few seconds. The knowledge of how to get that far in the first place is the hard part. And so on.

In short, it’s a complete reversal of the things that make its immediate neighbours tick. That’s pretty interesting! Not many sequels are so bold, nor have their boldness so immediately undone. The trouble is that none of it actually works very well. The developers were attempting to coax the NES, the Castlevania framework, and themselves into doing things that they just couldn’t quite do. To put it more bluntly, it is frequently laborious, runs poorly, and makes no sense. 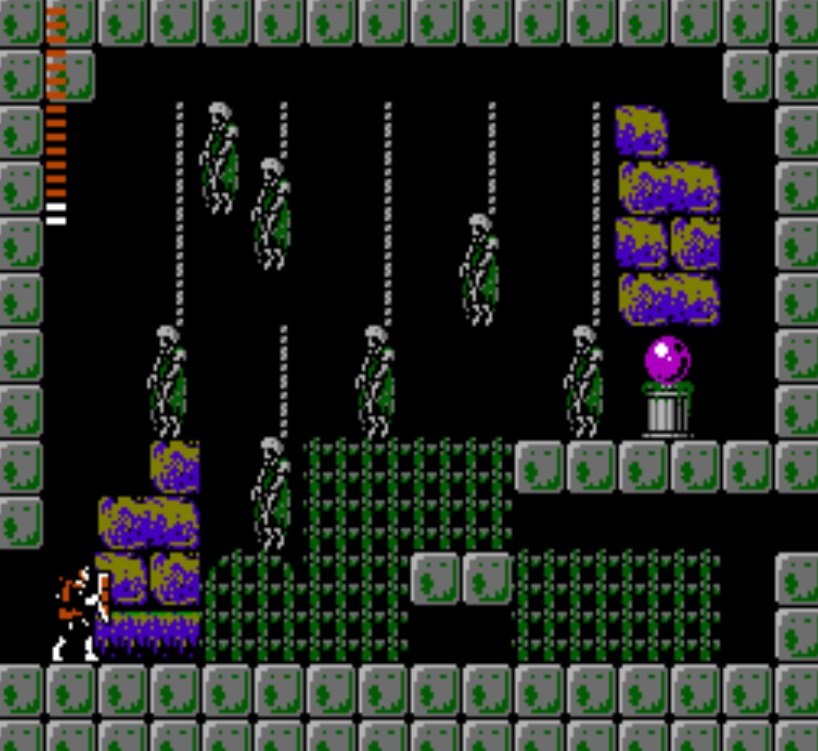 The result is a sort of surreal anti-game, half-dressed in the trappings of a traditional classic.

None of the normal rules seem to apply. Boss fights present no challenge, and death means nothing. Dungeons contain huge dead ends – actual dead ends, the kind that there is no reason to visit and that you almost never see in games. Sometimes you just have to go a different way. Sometimes you have to jump through a wall that isn’t actually there, but looks just like all the ones that are. It’s a distant precursor to Souls’ illusory walls, I suppose. But these ones are mandatory.

Puzzles… aren’t. Not in the prevailing sense of the word. They feel all but completely arbitrary in both narrative and mechanical terms. A greyscale man will trade you a red crystal for a blue one. You can then hold the red crystal and kneel in front of a cliff, and a whirlwind will appear to carry you up to the top. Garlic can be purchased from a man in a hidden basement, then taken to a cemetery and thrown on the ground so that another man will appear and give you a silk bag. It’s a whole lot of ‘what’ with a giddy dearth of ‘why’. There are hints available through dialogue and hidden throughout the game, but these serve more as another layer of oddness than as a guide. Indeed, many are outright lies. 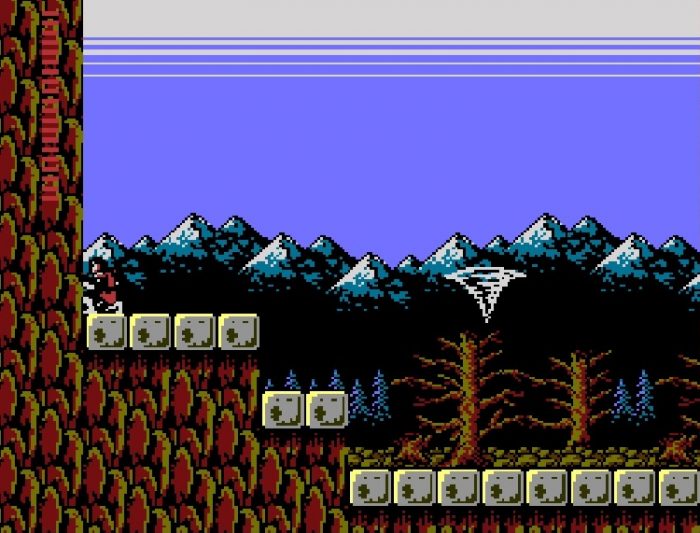 The whole thing creates an alien, frustrating, deeply charming sense of something that barely knows how to be a video game, but isn’t going to let that stop it.

Having this oddity squelching about in the middle of a retro dynasty like Castlevania really resonates with me, and I get the impression that I’m not alone in that. When Simon’s Quest comes up, people rush to its quirks: the stilted poetry of its translations, the meekness of its final battle, the act of kneeling in front of that cliff for just long enough that you begin to wonder if you’re doing it right before it works. These things stick with people. They’re memorable, and they’re memorably unlike the feeling that most games create. It is a game of non sequiturs and anti-climaxes. Those are taboo in this medium. And it isn’t just that Simon’s Quest breaks that taboo – it’s that it doesn’t even seem to notice it.

And that’s my best attempt at talking about Simon’s Quest. A sort of backhanded love letter, I guess. All comments always welcome. A parting note: Castlevania III is almost universally considered a better game than Castlevania II, and I can’t disagree with that in good conscience. But I will say that the world needs Simon’s Quests more than it needs Castlevania IIIs.