Because I’m a huge dork

So here is a dumb thing I do: I make up my own stories in games.

No, I’m not just talking about RPGs like Fallout or Skyrim where the entire point is to go out and make your own mark on the world. I’m talking about just about everykind of game. Action titles that already have stories, multiplayer shooters where there shouldn’t even be a narrative; hell in a darker moment in my life, I once tried to make a fictional justification for I.Q.: Intelligence Qube, a puzzle game where you rotate giant cubes floating in a void. HELP ME.

Like most mental sickness, I think the roots of my issue can be traced back to childhood. When I was very young, back in the days of the NES and dingy laundromat arcades, I used to make up my own stories for games all the time. Sometimes this was just a natural exercise in childlike imagination, adding flavor and flourish to an already great game I enjoyed. Often though, it was out of necessity. A craving for some kind of context and meaning the games themselves stubbornly refused to provide.

I’d play arcade shooters that would line up fleets of alien ships to blast, but not give me any particular reason to (aside from building a high score) and I’d want to know why. So I’d invent my own reasons. Poorly translated NES titles couldn’t articulate the purpose behind my plucky adventurer’s quest with their broken English and bizarre exchanges of dialog, so I took it upon myself to fill in the gaps between the lines. Or maybe there actually was a cool backstory for a game, but I was destined never to know it, because it was 1989 and the bulk of the world-building info was found in the instructional manual some jackass stole from the rental copy I was playing.

Making up my own narratives for games was something that I HAD to do when I was a child, hungry for meaning and stories in a young medium that was still finding its footing. But now I’m an adult, digesting content in an industry that has (supposedly) matured and expanded its intellectual horizons. Most games have stories these days, and nobody is stealing instruction manuals anymore (since you know, they barely exist now), but I’M STILL DOING IT.

I’ll ignore perfectly reasonable stories in games just to give them my own spin. If a story doesn’t tickle me the right way, I’ll bench that weak-ass plot and send in my own pinch-hitter. This is one of the reasons I’ve enjoyed Shadow of Mordor so much. With its Nemesis system and cast of randomized orcs, it encourages and sanctions something I’ve been doing on my own for years. 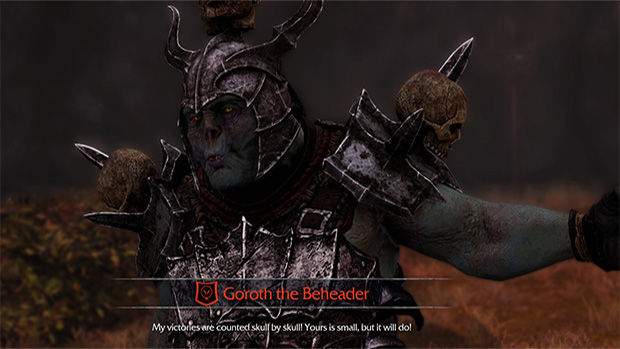 I’ve been loving the hell out of Mordor, but honestly, I couldn’t care less about its main plot. It kicks off with a standard tragic revenge set-up, introducing the protagonist’s family just long enough to bump them off so the resulting conflict can be all dark and personal.

Of course, the scope quickly expands to show that the forces of evil are threatening the entire land (so your personal grudge-match manages to avoid seeming petty when you slaughter a small nation’s worth of orcs over it). There is the factory issue comic-relief Dwarf, and an awkwardly forced cameo by Gollum, who is mostly there to hiss “my precious” a few times and remind you that, yes, this is a Lord of the Rings game.

I’m not saying it’s a bad story; it does what it does and is perfectly serviceable. It’s just, well, boring. It’s a collection of tropes we’ve seen trotted out again and again over the past decade. It gives you just enough of a reason to run across Mordor, slitting orc throats and jumping across rooftops, but no more.

So I’ve largely ignored the main quest. I put on the alternate-costume skin with its villainous black cloak and hood, cut anchor from Talion’s stagnant backstory, and started writing my own tale in copious amounts of orc blood. My Ranger isn’t a stand-in for Boromir or Aragorn, more like a rival for Sauron, and he’s come to Mordor not to liberate, but to RULE. I’ve spread my own wave of terror over the land, hand picking my lieutenants for the new age, seasoning them through battle, and ruthlessly separating wheat from chaff. I’m the King of monsters, the motherfucking Dracula of Middle-earth, and I couldn’t be happier in my own little head space.

I’ve only played the main missions when I need to move things along or unlock a skill. Even then it’s always jarring to watch a cinematic where Talion switches back into his fur-lined cloak and starts droning on about his family. I mean, who is that guy? 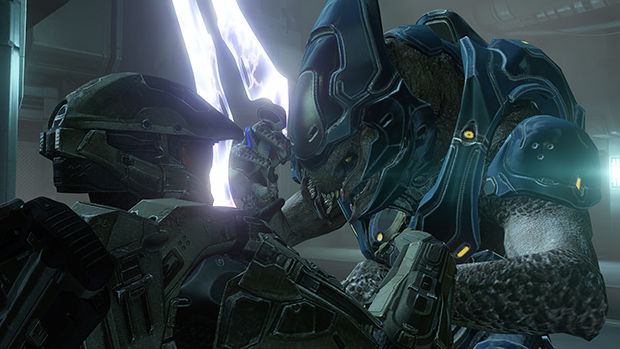 I’ve been hearing complaints about Destiny‘s story from all of my friends who have been playing it. That it’s scatter-shot, vague, and hard to keep track of. Now, I haven’t played Destiny myself so I can’t speak to that. But I suspect that if I did, the lack of a strong narrative wouldn’t hinder my enjoyment much. After all, I spent the last two Halo games studiously ignoring most of the story.

This was easy to do in the case of Halo 4 since they decided to hide most of it, tucking the best plot points away in audio logs and leaving the background information to in-universe novels I’ve never read (calling to mind all of those MIA instruction manuals). It was a matter of personal sanity in Halo: Reach, where the members of Noble Team were such a ridiculous collection of sci-fi stereotypes that I was incapable of taking any of them seriously. Their dialog might not have been spoken through broken English, but it often seemed just as ridiculous to me as some of the NES games I played when I was eight years old.

And I loved those games! I completely enjoyed the gameplay and setting, I just didn’t jive with the stories they were telling. Rather than let that stand in my way, I put together my own little mental framework to justify why I was an unstoppable cybernetic-motocross-soldier. It’s been two decades since I first picked up a controller, and I’m still cooking up reasons to blast alien fleets. (That is, aside from wanting watch the super slick reload animations of the Promethean weapons again and again, a noble motivation in its own right.)

I think we all have a need for context. As much as I enjoy games that largely boil down to “blowing stuff up,” I still like to have a framework for all the chaos, a reason to sling my rocket launcher around. My natural need to fill in the narrative blanks creeps into genres that are almost doomed by definition to lack a decent story, like multiplayer shooters.

Sometimes what you see is at you get. Play a shooter set in World War II, and all you pretty much need to know is that Stalingrad sucked, and statistically you’re not going to make it up that beach at Normandy with all your bits intact. That’s fine. But what about the Quakes and Unreal Tournaments of the world? You’re gonna tell me that there is NO better story behind a walking eyeball shooting a guy on high-tech hover rollerblades with a lightning gun other than “well, it’s a tournament?” Nah son, I think we can do better. Let me show you my Quake fanfiction. 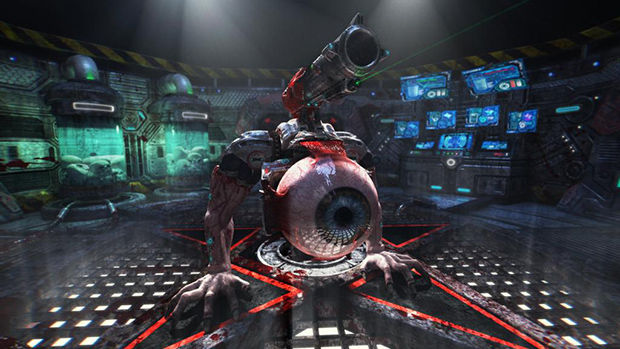 It’s all about play. About picking up these games and messing with them like they were action figures or building blocks. I think that the need and importance of imagination and creativity never goes away, but as you get older there is less time and fewer opportunities to flex those mental muscles. Sometimes, it’s actually kind of nice to get a little silly and play with a game.

Yes, maybe there is also a grain of criticism in there. A notion that it is vaguely sad that even in 2014, plenty of big-name games can’t tell a story that could carry water. I don’t mean to excuse bad writing or a lack of a plot, as I do think that the industry could do a LOT better in terms of storytelling. But I don’t let a bad story spoil an experience, like some bullshit fortune cookie, I look at them as an opportunity to make a game better for myself.

Maybe I’m crazy and I’m the only one who does this, I don’t know. But personally, I think that it’s one of the most beautiful things about videogames. The ability to inject a bit of yourself and your own personality into an experience is what sets games apart as a medium.

Also, if you know anyone in Hollywood, I have a killer screenplay for Qube they should see.