Vib-Ribbon is a game by NanaOn-Sha (Parappa the Rapper, UmJammer Lammy) that was originally released on the PS1. It came to the United States for the first time just recently, by way of PSN. The original game allowed you to take the disc out of the PS1 and replace it with any CD. You could then play levels based on the sounds found on that CD. That’s part of why the game has such minimalist visuals. The game’s code had to be small enough to be stored in the PS1 on its own. Hence the black and white vector-based graphics.

It’s amazing how NanaOn-Sha was able to create such charming and memorable characters with just a few lines. Vibri, the game’s star, is a lovable scamp with tons of personality. With this article, I will do my best to follow in his footsteps by using as few lines as possible in my effort to convey to you the joy ofVib-Ribbon.

The soundtrack is the real star of the game. It contains six songs. They are performed in the late 90’s avant-garde pop-club DJ style (see:Jet Grind Radio). Samples of cute people, pitch-shifted children and tough sounding rappers permeate. Lyrical content includes life, death, shopping, and more. The tempo slows down and speeds up in ways independent of logic. The goal is fun. That’s why it happens. 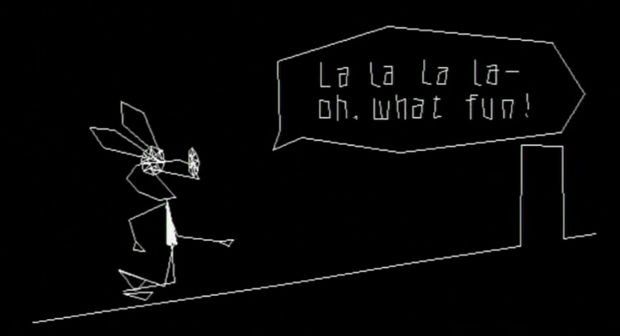 When you get hurt, your world shakes. Eventually, you may devolve from a rabbit man into a frog, then a worm. Do better, and your world gets better, then you get better. Eventually you may become a king.

What’s not perfect is its presentation on HDTVs. As many of you know, there is lag when playing PS1 games on a PS3 connected to an HDTV. This lag does not make the game unplayable. If you adjust your timing so that instead of pressing the button on the beat, you let go of the button on the beat, you may do better. It also helps that the game is already quite forgiving. It doesn’t want to hurt you, so if you play a little off time, it tries not to be too mean about it.

That changes when you put in a CD. Things are much less forgiving, and unless you adjust your HDTV settings or play on an SDTV, you will lose due to lag. You will be sad. Also, do people still have CDs? I do, but I am old.

I love Vib-Ribbon, but playing it on an HDTV via the PS3 is slightly busted.