Crimson Dragonhas seen quite the schizophrenic development cycle. For a while it was an Xbox 360 title, now it’s Xbox One. It’s appeared to be solely a Kinect experience, but now that seems up in the air. At one point, a demo was inadvertently released on the Xbox Live Marketplace before being immediately pulled once the gaffe was realized.

The lack of commitment isn’t doing any favors for the spiritual successor of Panzer Dragoon. During the five minute demo that I saw during last night’s Microsoft showcase event, nothing the game did moved me anywhere outside the realm of “thoroughly unimpressed”.

The first and most striking facet of the demo was that the game simply did not look like something that anyone would expect from next generation titles. The wear and tear of years of uncertain development ring obvious, as its visuals looked like nothing more than a middle-of-the-road game from 2011.

There might have been some leniency with regard to the graphics if the game played well. Unfortunately, it didn’t. The camera moved so dramatically and randomly, that it was near impossible to actually focus my aiming reticle on my target. On the rare off-chance that they actually did line up, it felt like nothing more than blind luck. 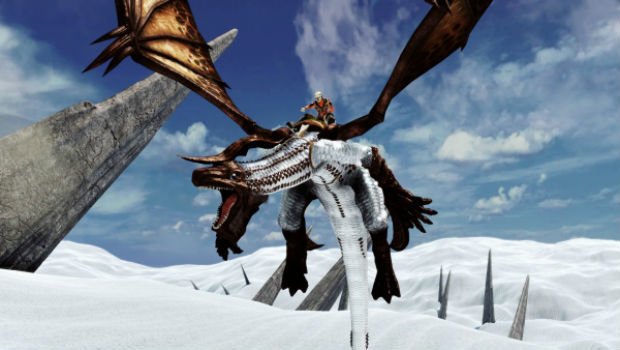 The same went for controlling the flight of my dragon. While it was obvious that I needed to avoid the projectiles of my enemies or the obstacles of the environment, the camera ensured that I would constantly be unsure of whether I needed to move, or if everything would swing around in a way in which if I did move, I’d actually swing right into the path of whatever I intended to avoid.

That’s all there really seems to be to this game. We know that it’s an on-rails shooter, and this is going to be the core mechanic of the game. And it really doesn’t work. It adds up to a sense of non-accomplishment that’s so ungratifying, either success or failure will come with the twinge that the player didn’t earn whatever outcome they arrive to. For what it’s worth, the entirety of my demo was done on a controller, so I have no clue if Kinect integration has been thrown out the window or not.

Then, at the very end of the demo, I was swallowed up by a giant wolf-anteater-dragon abomination. So, I retract the previous statement about being nothing but thoroughly unimpressed, because at that point I was thoroughly bewildered.

Hey, at least the Xbox One controller felt nice.