Destructoid's award for Best Mobile Game of 2018 goes to…

Setting out by yourself to create your own game is one of the riskiest excursions a creative type can take. That takes guts. It can take years for one person to see their vision through to fruition, and in that time there are challenges that can derail even the most determined artist. Self-doubt, lack of funds, lack of sleep, a rapidly changing marketplace, or the possibility that some other more well-funded developer is going to snake your idea. Copycat games on Google Play and the App Store are an epidemic for the small developers who give these marketplaces credibility. It happens to the very best games. It happened to Threes, it happened to Monument Valley, and earlier this year, it happened to Donut County, Destructoid’s Best Mobile Game of 2018.

Developer Ben Esposito first showcased what would become Donut County more than six years ago. In the time since, he toured to several game conventions, continuing to build on the ideas and feedback he received from players. After missing earlier release windows, he finally settled on getting the game out in August of 2018. Then, two months before his game hit, a copycat appeared.

Hole.io, from developer Voodoo, took the concept Esposito spent years developing, drilled it down to its most basic form, and pushed it out onto app stores. Any searches for “holes” or “hole game” would probably bring it up and as of today, the free-to-play title has more than 10 million downloads on Google Play. On theApp Store, it ranked as the fifth top free iPhone game of 2018. Voodoo may have been able to steal Donut County’s concept and possibly some of its thunder, but it couldn’t steal its soul.

Donut County is more than just a game about a hole. That’s merely the basic conceit that carries forward its charming and layered story; a story that touches on gentrification, urbanization, consumption, and our inability to take responsibility for our own actions. Esposito uses the idea of a hole that will selfishly destroy everything around it to craft a narrative about a raccoon who does just that. In the same way the hole starts small before growing into an unstoppable monstrosity, so too does BK, the rapscallion at the center of Donut County.

Though BK is more-or-less the player character of the game, he’s also a stand-in for Esposito himself. Donut County started out as a title featuring what he believed to be Hopi Tribe imagery after he became enchanted by Kachina figures. As he told Verge earlier this year, when his designs were rebuffed, he doubled down on his decision to use the Native American nation as fodder for his game. It wasn’t until he was able to divorce himself from his original plan that he was able to see an arguably better path forward. He wouldn’t tell a story about a culture he was not part of, but about his culture, his city, his tribe of Angelenos.

That’s the soul of this game Voodoo couldn’t replicate. Esposito used that hole to redeem himself the same way BK does in Donut County. It’s art imitating life, and if that isn’t enough of a reason to give this game this award, then surely the riotous Trashopedia is.

So congratulations, Ben Esposito. Donut County now ranks among the best mobile games Destructoid has ever played and stands shoulder to shoulder with past winners Fire Emblem Heroes, Severed, and Downwell. 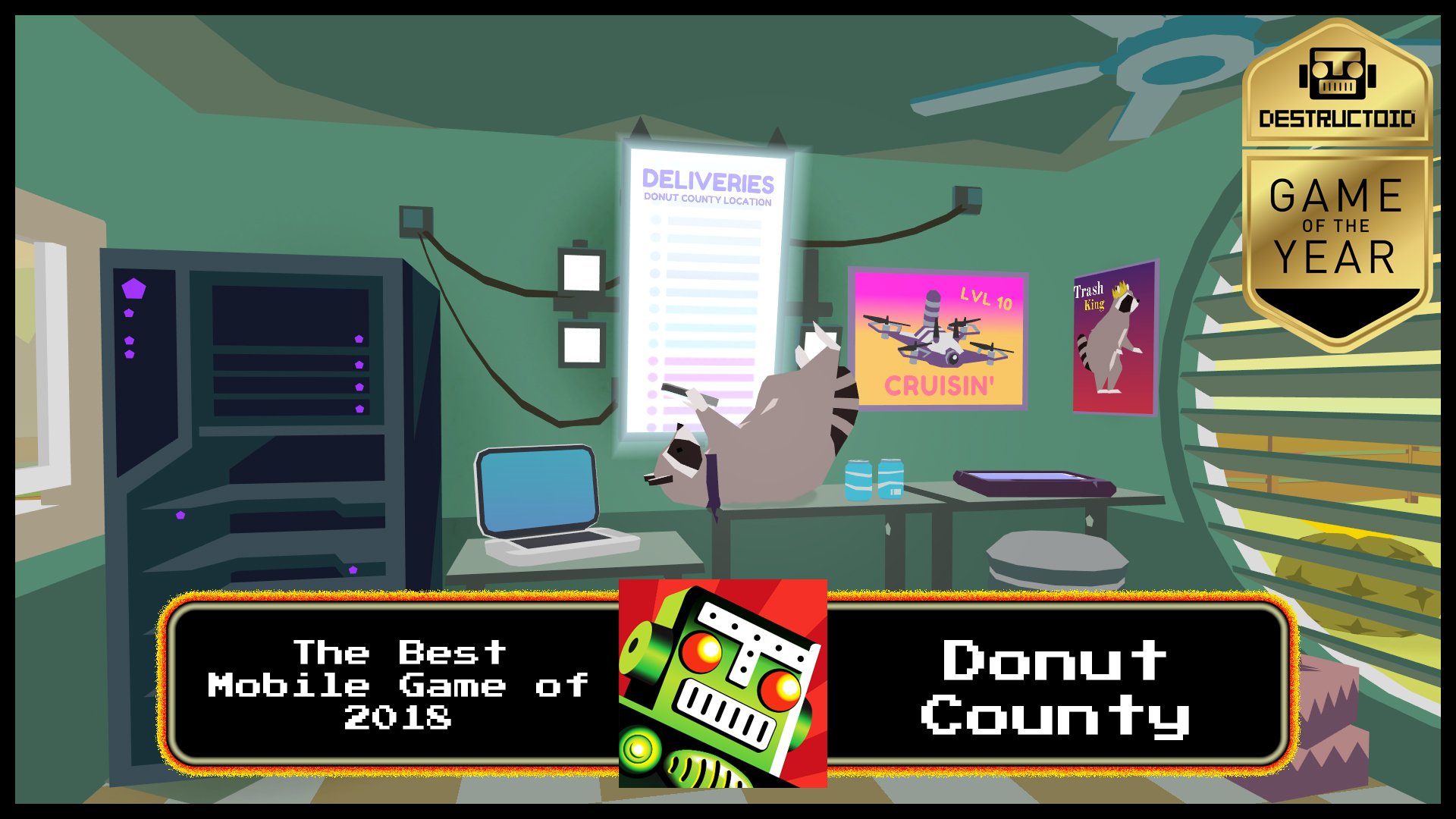