Do you love setpieces? You'll probably like Call of Duty: Advanced Warfare

The action you expect

The last decade has brought us ten new Call of Dutygames. With that steady drip of titles, the series’ developers have figured out how to craft increasingly elaborate action scenarios. Despite being at it for a while, the franchise shows no signs of slowing down. That’s great news for players that like their games with plenty of adrenaline-fueled moments.

At E3, Activision was showing Call of Duty: Advanced Warfarein hands-off presentations. While that format isn’t very conducive to getting a good feel for games, the demo did a fine job of driving home the point that Advanced Warfareis going to be laced with over-the-top setpieces. 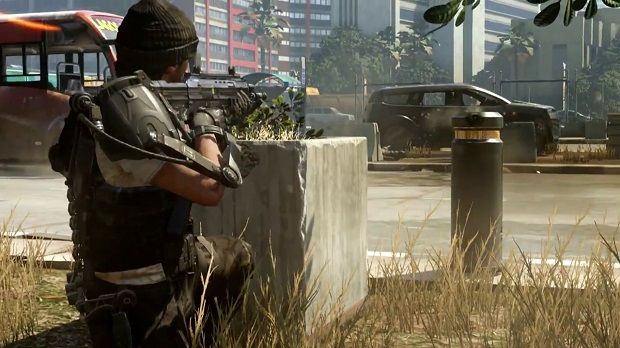 There were two levels shown during the presentation, both adept at communicating the new(ish) style that Advanced Warfarebrings to the table, but also assuaged any fears (or dashed any hopes?) that this year’s Call of Dutywill be a departure from its bread and butter.

The first of the two slices was nothing more than an extended gameplay video. Set up by a violent car chase along the San Francisco freeway gone awry, the majority of the level took place fighting across the Golden Gate bridge. This is where we got to see enemy soldiers jetpacking on top of semis, as the character we were watching mirrored those movements with his own boosts onto abandoned vehicles. I couldn’t help but feel as if it seemed like a slower Titanfall.

Although the shooting was a lot of what we’ve come to expect, the setting provided a wonderful playground for the action. Terrified civilians running away and cars littering the road made for a good start. But, it went into overdrive when a pack of drones were accidentally released from the enemies’ truck and started cutting the cable to the bridge. 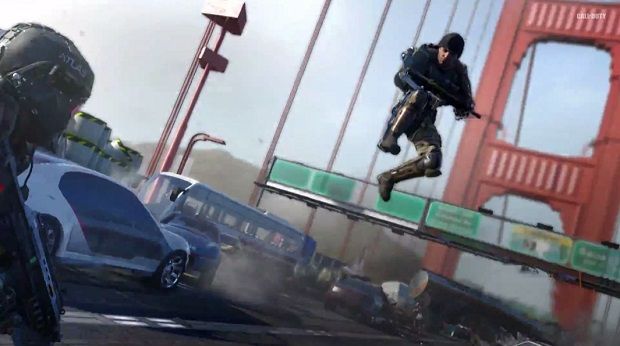 As one might suspect, suspension cables are critical to suspending a suspension bridge. Who would’ve thought? With several of the cables no longer intact, the bridge started to slowly come down as vehicles and people alike careened off the edge and into the bay below. At one point, a policeman was about to escape harm’s way until a bus plowed into him, followed by someone jetpacking to the protagonist like nothing ever happened. His demeanor eerily mirrored what players might feel; when you’ve become accustomed to this level of action over the course of a decade, what will it take to truly drop jaws again?

The second level, which was actually played by a presenter (supposedly), took a more methodical approach to things. Set in and around a Biolab in a Bulgarian forest, stealth was paramount to infiltrating the facility. However, just because cloaking devices and quiet knife kills were in play doesn’t mean that the setpieces slowed down.

Almost immediately, a helicopter spotted the two principal characters and began a mad dash through a river to get to cover before it could snipe them. After leaping off a cliff and hustling into the forest, it was finally safe. Well, sort of. 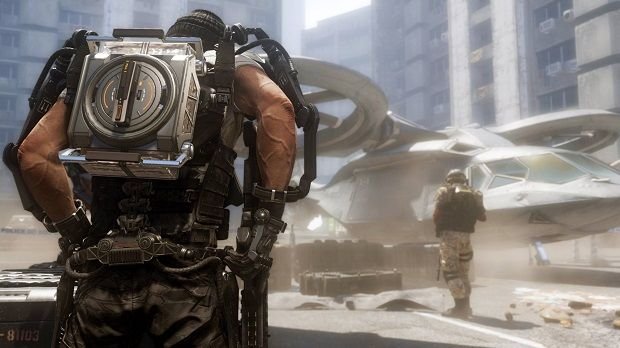 Making good use of the cloaking technology, the two slinked through the forest, knifing some unfortunate enemies in the throat, while opting to spare the lucky ones. After a bit, a tank rolled through blasting some sort of light that exposed cloaked individuals — a subtle reminder that not all setpieces need to be grand.

The inside of the facility held a lot of corridor-based shooting galleries that sometimes define the first-person shooter genre, but once outside, the commandeering of a tank made things interesting again. Rumbling along, nothing was spared from the path of destruction, as helicopters, vehicles, and individual troops fell in gratuitous numbers. Upon arriving at a getaway plane, the protagonists blew up the tank just for good measure.

Given thirty minutes to watch Call of Duty: Advanced Warfare, there are certainly mechanical changes being made to the way the game plays. However, its reliance on setpieces and scripted action makes sure that nothing strays too far from the Call of Dutyformula. Maybe Advanced Warfareisn’t really as advanced as everyone claims. But, maybe that sort of service to the fans keep millions of them loyal year after year. And, hey — maybe that isn’t a bad thing at all.