Dystopian steampunk mini-golf is now a thing in Vertiginous Golf

What happens when you get the developers of those old Nabisco mini-golf Flash games and have them make a new type of mini-golf title? Well evidently, you get something completely off-the-wall and bizarre, which feels more like a high-concept take on mini-golf that somewhat borders on existentialism in the industrial-era before the dawn of the 20th century. This sounds a bit heavy, but I assure you it’s not.

To go from Flash games on Nabisco.com to making a steampunk-style mini-golf game focusing on the trials of classism is a pretty awesome jump, I’d say. But don’t think of this as an ultra-serious title. In Vertiginous Golf, you get to experience mini-golf in a more arcade style, over-the-top way. And that’s certainly saying a lot, as the purpose of mini-golf is take make things interesting for non-golfers.

After a year in Early Access, the developers have been steadily releasing updates to the game while listening to the community in preparation for their upcoming release. And it looks as though they’ve got a lot in store for its existentialist mini-golf title.

Set in a world resembling Victorian-era London, Vertiginous Golf centers around the citizens of the city who look for escapism from the oppressive and gloomy nature of urban living. When the upper class and more fortunate citizens leave the city for comfortable living on floating islands in the sky, the lower class citizens have to settle for access to the “Vertiginousphere,” essentially steampunk virtual reality, to give them a vicarious taste of what life is like above the smog and clouds. And what better way to experience it than with a game of mini-golf? As you clear courses and unlock new challenges, you’ll find audio diaries explaining the nature of the world, and its denizens. There seems to be a lot more going on with the Vertiginousphere and the lands above the clouds,than you may realize.

When you enter the Vertiginousphere, you gain access to a mini-golf course designed by some of the most ingenious, sadistic golfers ever. Partnered with a flying mechanical bird, you’re able to get a thorough view of the course and its dangers in order to make to the hole. While some are pretty simple, with only a few dips and bumps to worry about — there are others that feature major hazards, like air-tanks that push your golf-ball away from the hole, or moving platforms that shift at a moment’s notice. During my first few games, things got pretty hairy after only three holes. On one course, I had to take advantage of half-pipes and loops in order to make it to the end of the course. They’re incredibly devious, and it’ll be interesting to see how players make it through the stages efficiently. 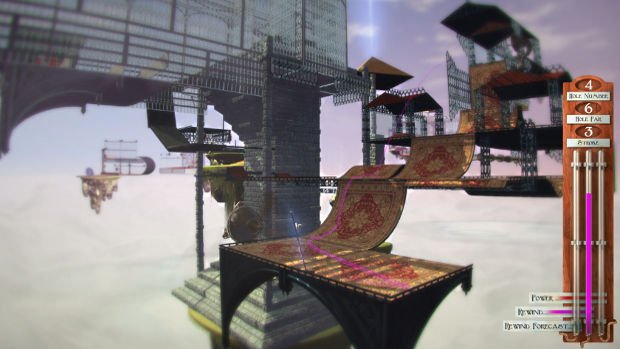 It’s quite clear that many liberties are taken with the game of mini-golf in theVertiginousphere. For instance, you’re given an after-touch ability to move and shift the direction of your ball, only slightly, to give it a better position and angle. Moreover, given the fact that this isn’t a real game of mini-golf, you’re able to rewind your moves back a few seconds, in case you make a serious error.

Though the game has been in Early Access for over a year now, there have been steady updates to the game since then, which is still prepping for its release. The most recent update that came out was the inclusion of online multiplayer. Up to eight players can compete against each other in real time (no turns) on a courses. You can even use weapons and gadgets to slow down or debilitate your competition.With its release coming up, the developers took a lot of feedback from fans during its time on Early Access. This includes special courses that only allows the use of your clubs and no special abilities such as the after-touch and rewind. Moreover, the final release will feature the full story mode and level editor, which players will no doubt spend many hours in.

I think it’s safe to say that Vertiginous Golf is one of the most unique mini-golf titles I’ve ever played, and its steampunk setting is the real capper to such an off-the-wall and rich concept. I’m quite fond of its approach to narrative within a mini-golf game. I’m definitely looking forward to seeing what this title has to reveal, as there’s a surprisingly high level of mystery present. Even though I only got a small taste of the story, what I experienced left me wanting to explore of what the Vertiginousphere had to offer.