Not a completely phoned-in effort

Benjamin Franklin once wrote: Nothing is certain except death and taxes. He’s right, but in our modern era of gaming, I’d like to add one more certainty to that list: that your favorite video game franchise will one day release an entry for mobile. Very rarely does a smartphone spin-off match the magic of the original series, but some do an admirable job of adapting the formula to the format. Some start good and keep getting better, others find solid footing before dragging down the experience because they aren’t profitable enough.

It’s too early to tell which path The Elder Scrolls: Blades will take, but at least the game has agood foundation tostart from. 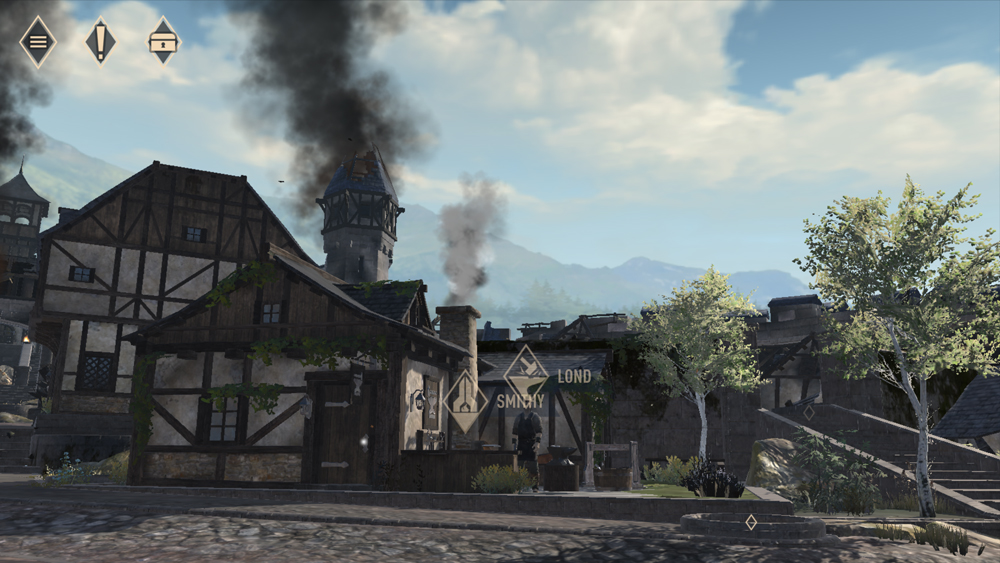 The Elder Scrolls: Blades casts players in the role of a member of the Blades, a group of highly trained warriors once employed by the Empire. At the start of the game, the Blades is no more and your created character returns to their hometown to find it smoldering. Many of its residents have fled or been captured, and as the most skilled warrior around, it’s up to you to rebuild the city and discover just why it was targeted in the first place.

Blades is Bethesda’s interpretation of what The Elder Scrolls should look like as a free-to-play mobile game and it’s important to know what that means. This isn’t an open-world game with a vast landscape to explore and the relative freedom to proceed how you choose. Rather, it’s a largely structured experience centered on rebuilding your destroyed city. To rebuild buildings and otherlandmarks, you need supplies and to get those supplies you need to embark on jobs and quests rescuing captured townsfolk and gathering loot. The more people you save, the more quests you unlock and the more buildings you can construct. It’s a solid set-up as long as you can deal with the limitations of the format.

The primary limitation is found in the various timers the game holds. Blades doesn’t limit how much you can play – and you can play ad-infinitum in the Abyss – but it does limit how often you can be rewarded for your efforts. At the end of each job or quest, you’ll be given a chest. Each type of chest has a timer attached to it for how long it’ll take to open. Wooden chests, which are routinely found throughout the linear dungeons and wooded areas you explore on jobs and quests, take just five seconds to open. That timer drastically increases when you go to unlock silver and golden chests, which take three and six hours respectively. You cannot open more than one chest at a time unless you spend gems. 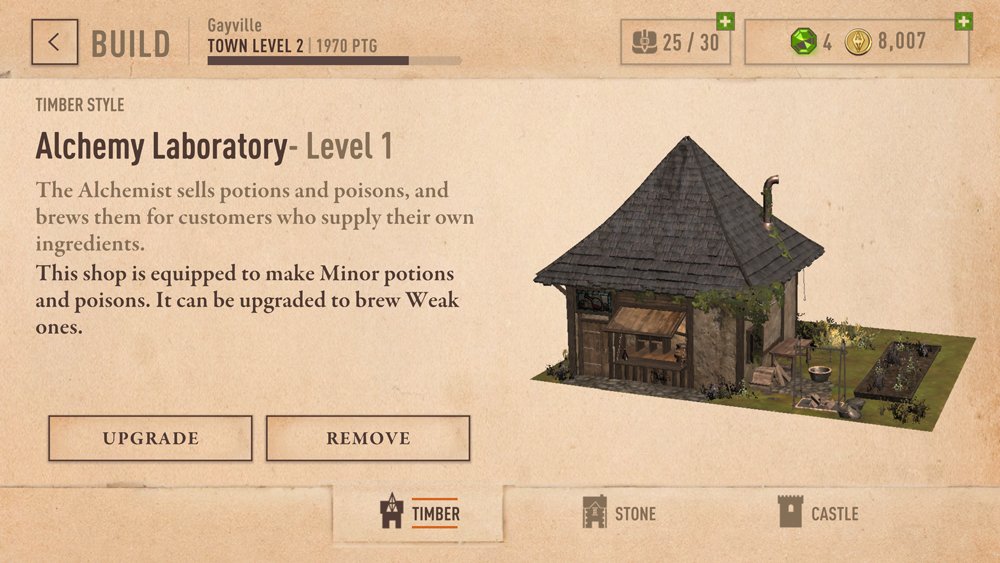 Gems are this game’s central microtransaction. There are no loot boxes (yet), but you can spend up to $100 in a single purchase on gems to pimp out your character. Gems can be spent on limited-time weapons and city structures, or instantly opening a chest, crafting a new piece of equipment, building a new facility, or completing a job you just don’t care to do. Gems can be earned in-game but I wouldn’t exactly call the system generous as it is right now.

The easiest way to earn gems in Blades is to take on quests and jobs. Jobs are updated automatically and time-based, so if you don’t do a job one day it might not be there the next. Quests are unlocked by talking to people in your town, which acts as the hub for the game and is the only aspect of Blades that even remotely resembles the open-world origins of the mainline series. Once you accept a quest or a job, you’ll be taken to a small, linear dungeon or wooded area to complete it. There is very little opportunity for exploration when you’re on a quest, though some areas do hold secrets waiting to be discovered. Unfortunately, most of the areas you traverse tend to blend into one other. There are a limited number of assets at play here and it doesn’t take long beforeevery jobstarts to reek of familiarity. Seeing the same staircase, the same bridge, the same abandoned shack in every other quest I embarked on wore thin well before I hit level ten.

So exploration isn’t exactly a strong suit for the game and neither is combat. I’ve never been a fan of the Elder Scrolls combat system, though Blades does its best to bend the design to the mobile format. Combat is still played in real-time, however, once you’re locked into battle, you can’t move. Your only options are to attack or block. There are three different types of attacks in the game: standard, magic, and skill. Standard attacks activate when you hold your finger to your phone screen. A circle meter will appear and fill up, and if you’re able to lift your finger the moment it reaches its apex, you’ll perform a powerful attack. Lift your finger too soon and you might not attack at all; too late and you’ll do some damage to your opponent. 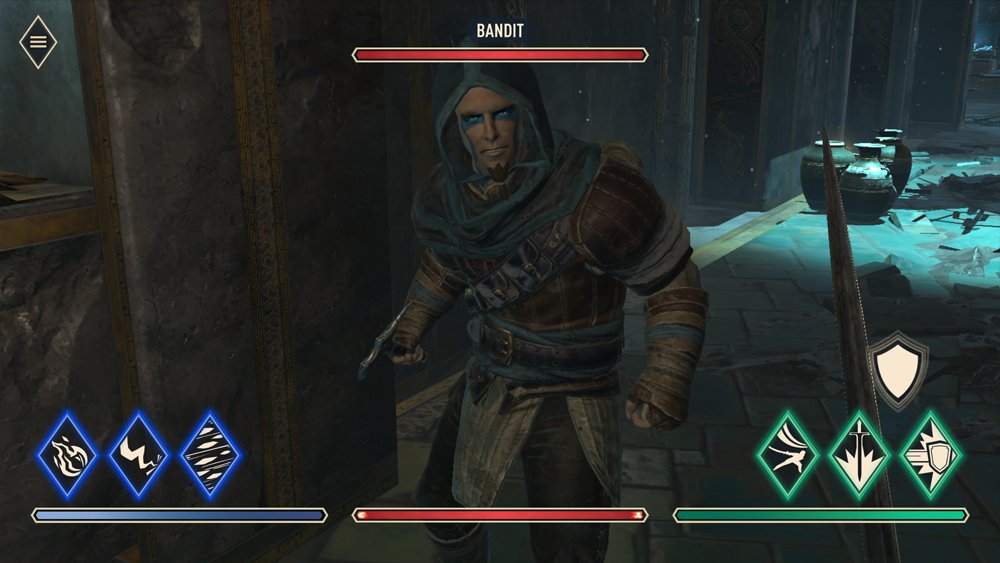 Magic and skill attacks are learned as you level up your character. You can only equip three of each at a time and these are activated by pressing the corresponding button on the screen. Magic and skill attacks are tied to their own meters that refresh as quickly as the fight goes on. While attacking is obviously important, blocking is the key to battle. Holding the shield button on the screen will bring up your shield or corresponding feature of a two-handed weapon, such as the handle of an elongated axe. Time your block right and you’ll stun your enemy, creating an opening for a magic or skill attack. Enemies can block too, with or without a shield, and it didn’t take me long to realize the key to every battle is to be reactive rather than proactive. Waiting to use my shield to stun a foe may drag out the length of each encounter, but at least it nearly always guarantees I’ll survive it.

So combat is effective but not exactly engaging. Thankfully, Blades is smart enough in the campaign to keep quests and jobs short. Most can be completed in a few minutes and when taken as a bite-size experience, The Elder Scrolls: Blades is a decent mobile game. Jumping back and forth between quests, working on my town, crafting new supplies, and equipping my hero doesn’t really become mundane. It’s when one of these activities overshadows the rest that I start to look longingly at the other apps on my phone, and there is no element of Blades that tires me out faster than the Abyss.

Abyss unlocks quite early into the campaign. Available from the main menu, the mode is a single, multi-floored dungeon that rewards players with better loot the further down they venture. It also highlights the weaknesses of the package. The Abyss is ridiculously repetitive in terms of layout and design and one battle after another shows just how limited your options are for taking down enemies. I made it to the tenth floor of the dungeon on my first try and could probably make it quite further down with my current equipment setup, but I’m just not buying what it’s selling.

The Abyss, as well as the rest of the game, can be played in either landscape or portrait mode, each with their own strengths and weaknesses. Portrait mode is how I’ve spent most of my time with the game. Using simple touch controls, it’s pretty effortless to move my Nord around each dungeon, getting him to exactly where I want him to be. There are some weird quirks with the controls – there have been multiple instances of my character just stopping and slowly turning around – but the system works well when playing on my phone.

On my iPad is where I’ve primarily utilized landscape mode. Playing in this orientation gives you the option of the standard touch controls or using virtual joysticks. Joystick movement can be calibrated to your liking and the game even gives you the option to move the shield button. It would be nice if the latter option were available in portrait mode too as its central location is poor when playing on a larger-screen iPad. I just want to point out quickly that my iPad and phone accounts are the same. Because Blades is always online and because it uses a Bethesda account, logging into the game from either device is no different than accessing an Elder Scrolls Online account from a different computer. 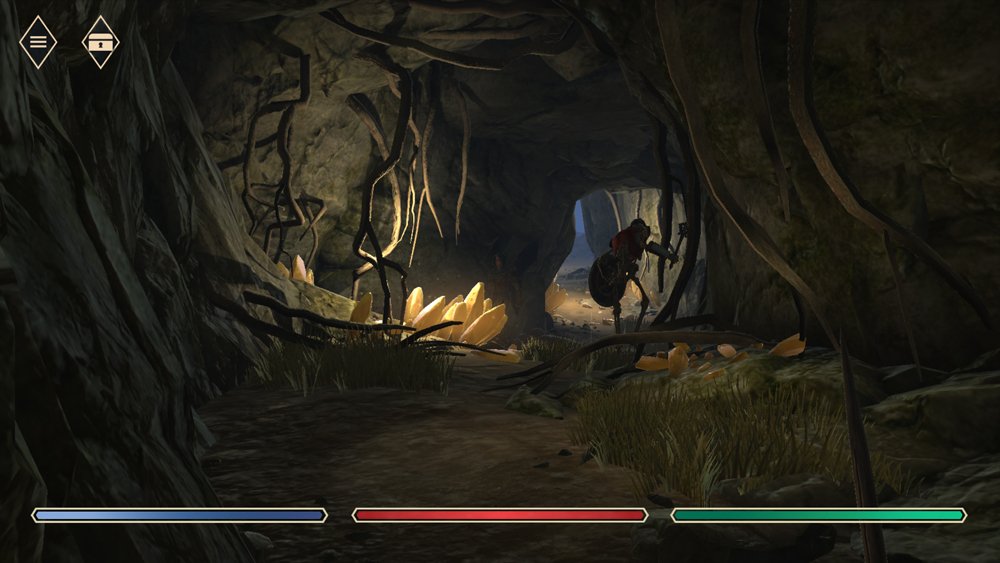 As of the publication of this review, I’ve been participating in the Early Access for a week. Treating Blades as I do my other free-to-play games – something I play for a couple of minutes at a time throughout the day as I remember to start the unlock process for my chests – has been working well. I haven’t had the urge to move on from it yet and I’ve even felt a real sense of accomplishment after completing a handful ofdifficult quests. The ability to scour the area after you complete an objectiveis nice and the game even lets you keep all the loot and XP you gain if you fall during a job or quest.

I just hope the warm feelings I have toward this game last. I’ve seen how decent mobile games can turn sour and there is a myriad of ways The Elder Scrolls: Blades can blow it going forward. There is a PvP Arena mode not currently available in Early Access and I wonder how – if at all – the game will handle matchmaking between players who haven’t spent a dime and those who have no problem dropping fat stacks for superior equipment. But that’s a worry for a full review down the line.

Right now, as I move closer and closer to getting revenge for what happened to my city, I’m curious about what Bethesda has planned for Blades going forward, what type of limited-time events I can look forward to and how the game will go about rewarding those who play in addition to those who spend. Where it is right now is an adequate start, and I can only hope as this game-as-a-service goes forward, it embraces the very best of the free-to-play model and not the worst.

[This scoreless review is based on a copy of the game downloaded from Google Play and the App Store.]