Back in 2011 CI Games announced Enemy Front, a World War II shooter that was being worked on by Stuart Black who was the guy responsible for Black. It’s funny how over-hyped that game was looking back.

Anyway, Black left at some point in 2012 and since then Enemy Front was completely reworked. It’s still a World War II shooter, but instead of just being another colorless run-and-gun shooter like Call of Duty, the developers at CI have taken more of a fresh approach to the genre that made me think of it as a nice cross between Bad Company and Far Cry 3 during my hands-on time.

You can also expect to see some lovely visuals. CI Games was wise to go with a vibrant color palette instead of the brown and grey like WWII shooters of the past, especially with this being the CryEngine 3 engine. That said I wouldn’t say it looks just as good as Far Cry 3 visually, but it comes close. Also I can’t believe how garbage these screenshots are that we were sent to go along with our coverage. Trust me when I say the screens don’t do the game any justice.

From the levels I saw they’re wide and open similar to the missions of the Bad Company series. As for the enemy encounters, they’ll remind you of Far Cry 3’s Outposts that were scattered across the island. You can go in hard, guns blazing, or you can carefully scout the area and stealthily take out enemies one by one. With the levels being fairly open you have many options, like going to a nearby ridge to snipe enemies, or go right into the camp to perform stealth kills as the enemies are out on patrol.

Oh I should mention the sniping system from CI Games Sniper: Ghost Warriorseries is in Enemy Front. Holding your breath will slow down time, and wind resistance will be a factor when you aim your rifle. 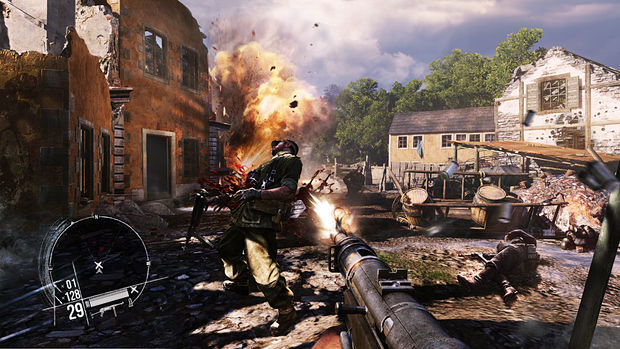 Guns blazing can work, but if an enemy is really close to you just one well-placed shot will instantly kill you. If you do get caught — from letting the enemy dedication meter get completely full or an enemy spotting a body you didn’t bother hiding — all the enemies in the vicinity will hunt you down at your last known location. Eventually they’ll stop hunting for you, but their guard will be up so long as they’re alive rather than eventually going back to a complete relaxed state.

Another level saw me taking on a mass of enemy soldiers with fellow resistance fighters, so there will be at least some levels where you’ll be taking on waves of enemies. After that I went to another section of the game where I needed to infiltrate a base. I was doing pretty good quietly making my way through, throwing rocks to distract guards and such, but I got cocky and spotted. Thankfully, there is no fail state for getting caught, but I quickly got swarmed by guards and died. 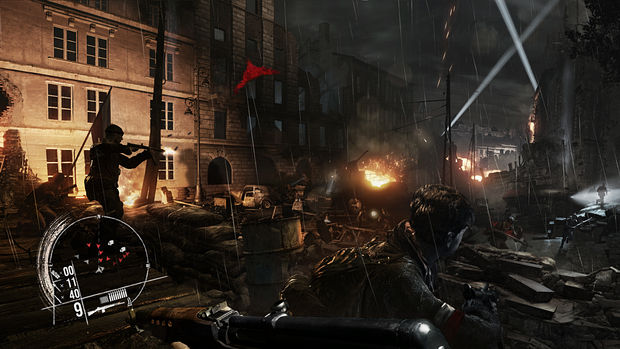 I wasn’t expecting to like Enemy Front at all going in and now I’m looking forward to it. The Outpost stuff from Far Cry 3 was one of my favorite things about that game so getting to do that again but this time sneakily stabbing Nazis in the back is enough for me to want to get back into a WWII shooter.

There is a multiplayer mode, by the way. It offers three modes with deathmatch, team deathmatch, and a domination-like mode called Freedom Fighter. There’s support for up to 12 players and I have know idea what it plays like as CI Games wasn’t showing anything off in that regard.

Is there a market for World War II shooters this day and age? It’s been so long since there was a good one that CI Games may get lucky and capture a good audience here with Enemy Front.