This entry is all about Super Mario Sunshine. Feel free to share some of your own favorite things about the game in the comments! 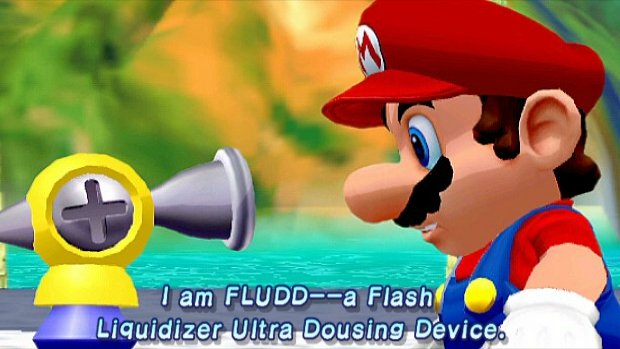 A nozzle for every occasion

Ahh, the FLUDD. By far the most unique tool ever to be in Mario’s possession, the FLUDD is a water-powered contraption which can be used to spray like a pump, clean up messes, hover through the air, dash or slide quickly across land and water, and rocket-jump straight up into the sky. It’s immensely useful, and easily sets Super Mario Sunshine apart from any other game in the series.

Every time I replay Sunshine, I can’t help but be amazed at how fun it is to use the FLUDD. Hovering as a platforming mechanic feels wonderful. It allows Mario to cross huge distances, reach crazy heights, stop himself in midair to make a precise landing or correct an erroneous leap, and more. In addition, the Rocket and Turbo nozzles allow him to cover great distances both vertically and horizontally in record times, making it a piece of cake to traverse large levels or recover from a fall.

I especially enjoy using the waterslide technique, which involves spraying water in front of Mario and then diving onto it so that he slides quickly across the ground on a layer of water. It’s very useful for the levels where he has to chase Shadow Mario or race against Il Piantissimo, and it’s simply a ton of fun to do as well.

I also can’t help using the FLUDD to annoy everyone around Mario by spraying them in the face with water. Drenching the Toads, Piantas, and Nokis on Isle Delfino and watching them shake it all off and throw a fit — it never gets old. Some of them were asking for it anyway, makin’ me break my back cleaning up all this gunk. Why don’t I clean up your FACE while I’m at it? 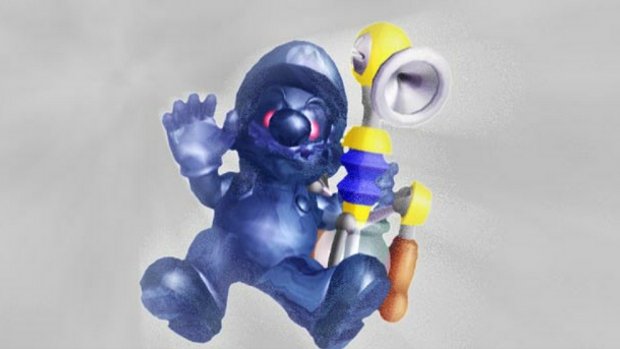 While the FLUDD adds some interesting new mechanics to Mario’s platforming, the game still manages to shine even without it. During specific levels, Shadow Mario will appear and steal the device right off of Mario’s back, leaving him to rely on his excellent jumping abilities to finish the level.

These FLUDD-less stages feel like a throwback to the Super Mario 64 style of Mario platforming. They all take place on floating platforms above a bottomless pit, so any misstep could end in a swift death. Most of these levels involve rotating platforms and other moving obstacles, and traversing them requires a lot of skill and careful observation.

These areas manage to feel completely different from the main game, yet equally challenging (if not more so) and just as fun. It’s a great way to change things up and keep the gameplay interesting by dropping the core FLUDD mechanic entirely, taking players out of their comfort zone by removing the ability to hover safely and testing their true platforming prowess. Some of these stages are the most difficult areas of the game, and it always feels nice and rewarding to emerge victorious and then promptly return to hovering around like normal. 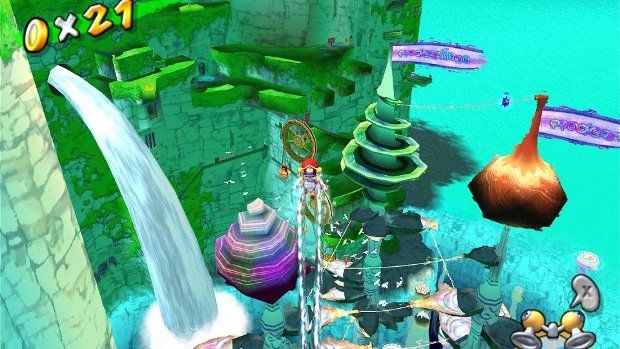 Sittin’ on the dock of the bay

All of the levels in Super Mario Sunshine are island-themed, but even so, they do a good job of providing diverse tropical locations. The beachside hotel, the theme park, and the village surrounded by giant palm trees and mushrooms are a few of my favorites, but for me, the coolest location is Noki Bay.

Noki Bay is a quiet little area situated on the side of a large cliff, with a beautiful waterfall, towering seashell structures, and hidden ruins to explore. There are so many memorable moments in this level: spraying water along the cliff faces to reveal secret passages, discovering an ancient tomb, riding around in the mudboats, jumping from the top of the waterfall, diving to the depths of the bay to confront a giant eel… everything about this level appealed to the explorer in me.

People often ask which video game world you wish you could visit or live in, and for me that would definitely be the world of Super Mario Sunshine. I’ve always had a soft spot for the sea and tropical locations, and the areas in Sunshine are some of the most beautiful and exciting examples of tropical places in a video game. I would love to live in Noki Bay, going for dives, taking in the sights, and visiting the other locations on Isle Delfino whenever I wanted. It would be such an amazing world to inhabit (as long as it was goop-free)! 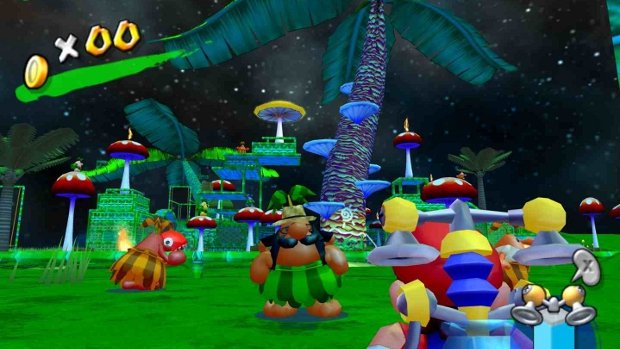 Another thing that helped make the world of Super Mario Sunshine stand out was the giant, scalable set pieces. The shine sprite tower in Delfino Plaza, the windmill in Bianco Hills, the Ferris wheel in Pinna Park, the enormous palm trees in Pianta Village — many of these things look nearly impossible to climb at first, but eventually Mario gains the means of reaching those formidable heights, and it feels incredible to be able to scale such impressive landmarks and look down at the world below.

Aside from Noki Bay, my favorite place in Super Mario Sunshine is at the very top of the central palm tree in Pianta Village. This tree is so gigantic that it takes several rocket jumps to be able to reach the top. Not only that, but the leaves are so huge that Mario is easily able to run all over them without fear of falling off. He’s like a tiny little red bug to this impossibly large tree.

The extreme height might freak out some acrophobes, but those brave enough to make it up there are rewarded with a stunning view of the sky and the entire village far below. The Piantas even built a small wooden tower at the top of the palm tree, possibly to sit and look up at the clear night sky from a quiet, secluded place up in the clouds. Well, that’s what I like to use it for, anyway! 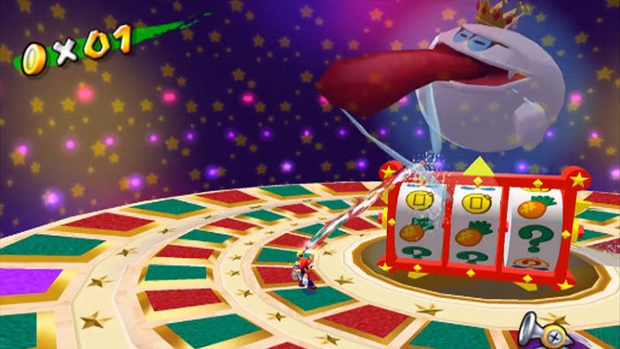 An apple a day keeps the ghosts away

Super Mario Sunshine has some crazy boss fights. There’s a giant flying Piranha Plant named Petey, a huge Gooper Blooper with delicate tentacles, and a massive eel with a poor dental plan. There’s also a King Boo, an enemy we’ve seen before in other Mario games, but even so, he manages to be one of the most enjoyable bosses of the bunch.

King Boo hides beneath the casino of Hotel Delfino. The fight takes place on a gigantic roulette wheel with three circular segments spinning in different directions, which can be dizzying and confusing until it stops moving. Water does nothing against this ghost, but after a while he’ll bring up a slot machine out of nowhere and give it a spin, causing objects to appear depending on the result.

If the slot machine lands on three fruits, then Mario is in luck! Just start chucking fruit at King Boo and see what happens. Most of the fruit will splash juice all over his face, which he’ll happily lick up (that always makes me laugh). But toss a chili pepper at him, and he’ll become so overwhelmed with the heat that a hit from any other fruit will send him reeling.

It’s such a bizarre fight, but that’s why I love it. Killing a ghost by throwing fruit at it? Why not? It brings back memories of defeating Wart by forcing him to eat delicious veggies. Mario’s foes sure don’t like their healthy foods, do they? 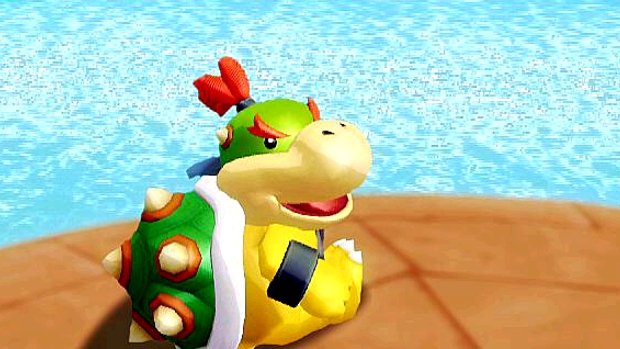 Bowser is one of my favorite Mario characters, and a lot of that love stemmed from his portrayal in Super Mario Sunshine. Granted, Bowser doesn’t get much screentime in the game; the first time he shows up is for the final boss sequence, and he also has a short cutscene before the credits. But Nintendo manages to pack a lot of personality into him during such a small amount of time.

Bowser never really had much of a personality until the Mario RPGs, where he was often shown to be a bit of a goofball and a softie (especially in Paper Mario). Super Mario Sunshine offers a completely new side of Bowser’s personality.

Sunshine introduced Bowser’s son, Bowser Jr., revealing the mean old Koopa to be a father figure and a family man, a side of him we’ve never seen before. Sure, there were the Koopalings before Jr., but their relation to Bowser was often rather murky. In Sunshine, Bowser and his son are on vacation causing mischief, when Jr. kidnaps Princess Peach because his father told him that Peach was his mother. Jr. just wants to reunite his family so they can enjoy a vacation together.

Of course, Peach being his mother was just a lie told by Bowser. After a rather bizarre boss fight against Bowser and his son in a giant hot tub, Bowser finally sits down to have a talk with Jr. and tell him the truth. Jr. isn’t surprised by this, and instead of fretting, he vows to one day get revenge on Mario. The two Koopas share a nice moment of father-son bonding over their mutual hatred of the plumber.

I really enjoyed seeing this side of Bowser, and it made him seem like an almost sympathetic character. He’s still the bad guy, but he’s also living his own life in the background, trying his best to raise a son and keep him happy. If only he could think of a way to do that without kidnapping princesses…