The kids are all right

A few weeks ago, I was set loose in an early section of Final Fantasy XV ahead of E3, and I still have Florence and the Machine’s cover of “Stand by Me” buzzing around my head. The sweeping track isn’t just intended for trailers or commercials — it’s also in the game proper. It played as Prince Noctis and crew’s car broke down and I manually pushed it to a not-at-all-close rest stop. Our road trip to unite two warring nations with a symbolic royal wedding was already getting sidetracked.

In all likelihood, Final Fantasy XV will be the first Final Fantasy I complete. I’ve gotten into stuff like Tactics before, but never the mainline series. I’m sure some of you know how that goes. Square Enix certainly does. At a press event, we were told the intent with XV is to appeal to veterans and first-timers alike, which is precisely the sort of thing developers always say they’re striving for with sequels. I could feel it here, though. Genuinely. And as a new player, I am into this game.

Back to the broken-down car. We safely got it over to Cindy, a mechanic who unfortunately doesn’t perform automotive repairs out of the kindness of her heart or accept IOUs. So, I set out to lower the local population of wolf-monsters and earn funds in the nearby open-ended countryside.

If you’ve played the Episode Duscae demo, you have a strong sense of how the real-time combat works in XV. Playing as Noctis while my three best buds provided backup, I weaved in and out of battle by warping and swapped between a few different weapons on the fly while pummeling poor beasts. In terms of controls, it’s fairly straightforward, but you can’t stay on autopilot. The trick is to keep momentum going without overextending your strikes or your mana reserves, which I most definitely did and paid the price for. My crew had my back, thankfully, and then I set a rhino on fire. I still feel guilty. 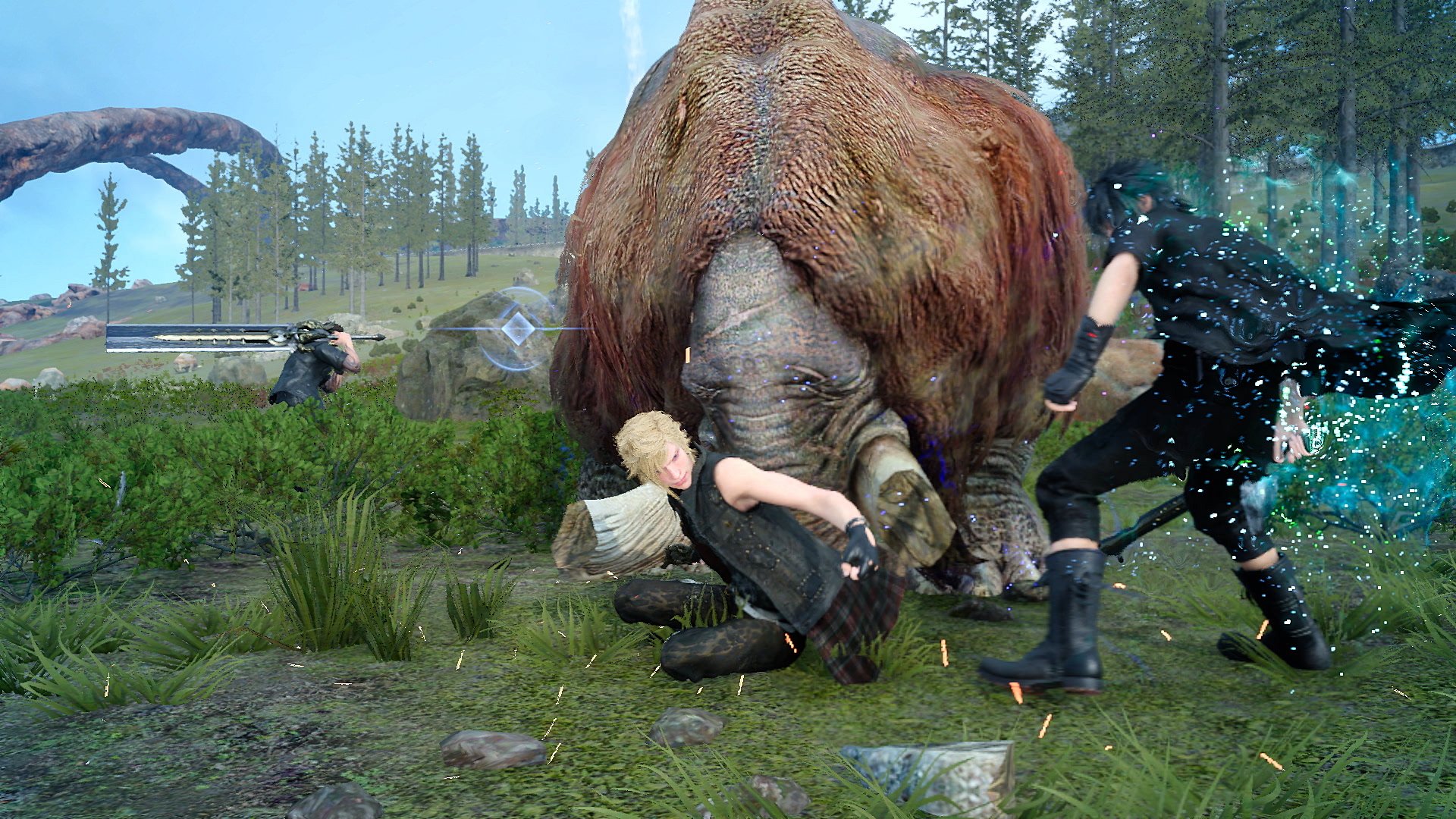 With our car in working condition, we were able to hit the road. Driving was more automatic than I was expecting. You can have Ignis take the wheel, if you want, but even when you’re “in control” of the Regalia, you can’t exactly go on off-road joyrides. That lack of freedom took some getting used to, but I suppose that’s what the Chocobos are there for (I sadly didn’t get to ride one).

Against Ignis’ recommendation, I decided to cruise around at night. He said it would be dangerous to do so, and boy was he not lying. We ran into a giant armored foe waltzing across the road, hopped out of the car to kick its ass, and were promptly slaughtered. Lesson learned. Setting up our Coleman-branded gear and camping until sunrise was a safer bet. I suspect Final Fantasy XV will go to strange and convoluted places eventually, but at least for the early-game, I’m fond of the simple road-trippin’-it-with-friends vibe. That sense of camaraderie helps ground the story and setting.

Eventually, I made it to the place I was supposed to be heading to all along: a dock to catch a ferry. Nothing is ever that easy, of course. The ship wasn’t ready for us and a weirdo magician-looking man threw a coin at me. Clearly, he’s up to no good. That was about the point at which I started to wonder how long I had actually been playing the game and realized I probably needed to stop.

All told, the preview session convinced me I’ll want to dig into the final version which, as a non-fan, is a big deal. They finally did it. But there are two things I’m anxious about: whether or not consoles will be able to handle running Final Fantasy XV reasonably well, and what the open-world design will feel like after, say, 25 hours (will it become a slog?). We probably won’t know until September.