Is anybody out there?

With each passing day, with each horrific new milestone met in the COVID-19 pandemic, I wonder about how future generations will learn about this era in history. I think back to my education on the Spanish Flu and, outside of the monumental number of people who died from it and when it happened, I can’t recall another fact about it from my various history classes as it was usually enveloped within the greater lesson plan on World War I.

The one aspect of the Flu that remains imprinted in my mind is the images that came out of it. I remember the rows and rows of people in hospital beds, nurses dressed in white holding the hands of those about to pass, a small child crying next to what looks like their dying mother. It’s heartbreaking, and our current catastrophe has produced no shortage of era-defining images as well, from mass graves to body bags stored in cold storage trucks to the abrasions doctors and nurses are left with from sweating into their PPE for hours on end.

All of those images are harrowing, but for weeks now, the defining pictures of what COVID looks like to me have been the many taken by photographers showcasing empty streets, deserted amusement parks, and wildlife roaming through rural towns without bother. There are many wonderful photo essays you can find online highlighting the quieting effect this virus has had. Every time I would bypass a paywall to see the empty squares of Milan, another image would pop into my brain. One of a young boy looking for a friend in Fragile Dreams: Farewell Ruins of the Moon. 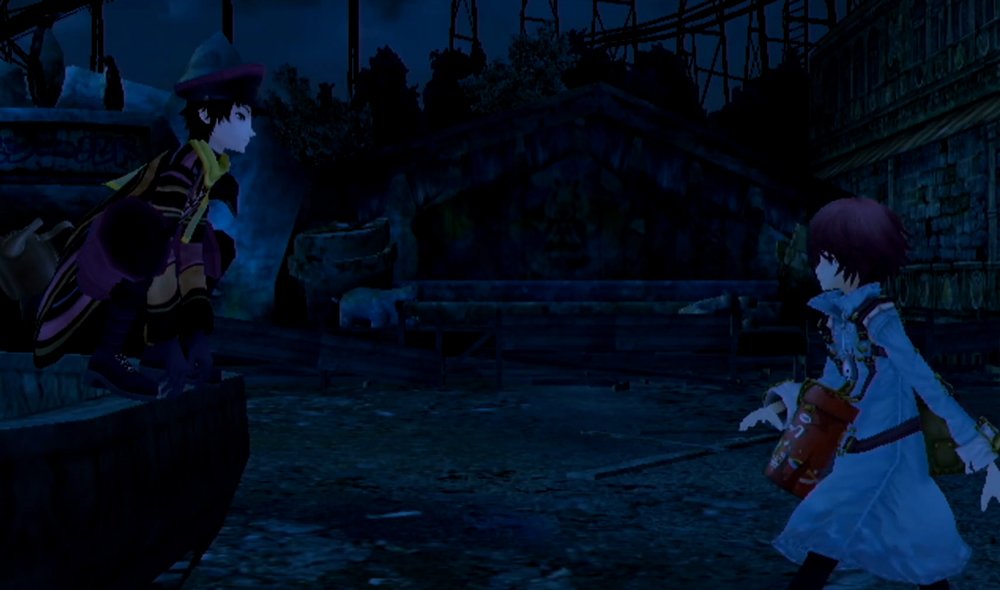 Fragile Dreams is a peculiar title in the Wii catalog. Developed by Namco and Tri-Crescendo, it’s a beguiling journey through a post-disaster Japan. Something has killed off nearly the entire world’s population. Playing as Seto, you start the game moments after burying your dead grandfather. Scouring your observatory home, you find a note he left behind telling you to head for the red tower in the distance. The tower is Tokyo Tower, and every once in a while it will glow beyond the trees, like the green light beckoning Gatsby toward East Egg.

I probably shouldn’t have been so drawn toward Fragile Dreams given the state of the world right now. For two months, I’ve been living an isolated experience, alone in my apartment, working from home, with only the occasional social interaction with employees at the grocery store or when chatting with my Podtoid co-hosts. But as thankful as I was for those fleeting moments of connectivity, I always had to remind myself it didn’t equate to real connections with those around me. Talking with friends and family on Skype and Zoom isn’t the same as being in the same room as them; shaking hands, hugging, fist-bumping, and other sorts of physical contact I haven’t felt in more than two months.

Maybe that’s why Fragile Dreams was the first and only title to come to mind when going through this period of isolation. It’s the only game from memory that can even remotely relate to what it is I’m experiencing. Like me, Seto is alone in this world. The first person he meets isn’t a person. It’s Personal Frame, an A.I. companion that makes Fi look like she’s taken a vow of monastic silence.

This Siri-with-a-terrible-battery is the only communication Seto has for a great deal of Fragile Dream‘s opening, wearing it like a backpack as they explore a dilapidated train station and its attached mall. The communication feels real because there is something there to answer your questions and inquire about your state of mind, but like a Zoom call with my family, there’s a digital wall that keeps it from being authentic. Seeing my parents on an iPad screen was certainly great for what it was, but it ultimately did nothing to dissipate the constant feeling of insulation. 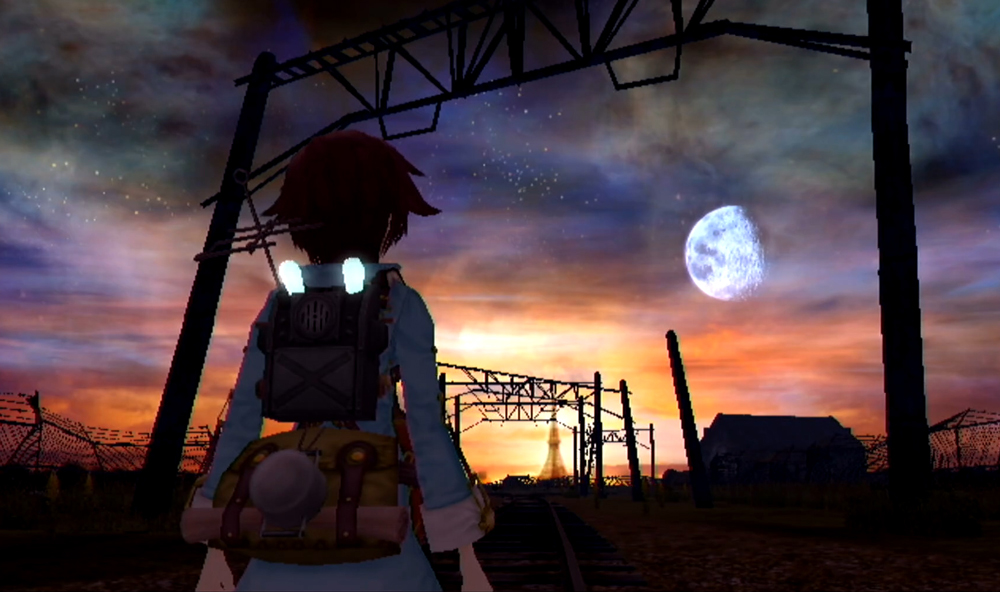 Seto’s journey is one of consistent loss. Personal Frame eventually runs out of juice and the friend he meets after isn’t long for the world himself. Beyond the small number of survivors he runs into, the abundance of grief Seto experiences comes from the memories tied to the artifacts scattered around the world. A popped balloon gives a glimpse of a child who becomes separated from his mother before ultimately dying himself. A dog collar shares the story of a hound and his owner as the reality of what’s going to happen becomes clear. A school photo tells of a man who had everything he ever wanted except somebody to share it all with.

While I’m not finding artifacts of the past on my daily walks to the park, I do have access to Twitter. It’s become the best glimpse into the reality of what’s happening in the world. Just as Seto doesn’t know any of the people from the objects he finds, the people I read about on Twitter who are bearing the brunt of our current circumstances are unfamiliar to me. People who’ve lost their jobs, who’ve lost loved ones, who are scared of getting sick but can’t go without a paycheck; they’re all strangers. But hearing about their experiences only helps shape my understanding of how the rest of society is dealing with the COVID fallout, something my tiny corner of the country shields me from.

In truth, I forgot about these snippets into the lives of the deceased in Fragile Dreams before starting it back up last week. Before then, the strongest memories were the crushing sense of loneliness Seto feels and this barren, crumbling world he’s forced to traverse. Now, video games have no shortage of decrepit cities to venture through. The Last of Us is a great example of how nature can rebound from a near-instant drop in the human population. The Metro series also holds its fair share of resplendent decay. From what I’ve seen of the Fallout franchise, it too is a creative look — if a bit more colorful one — at a world where humans took a timeout for a couple of decades.

The difference between Fragile Dreams and those other titles is its focus on sorrow. That is the be-all, end-all theme of this 12-hour game and you can see it in every inch you explore. You see it in the drawings on the walls left by kids who are no longer there, the sad state of the amusement park and its rusted-out rides, and vast emptiness of the dam. You also see it in the creatures you choose to fight along the way. Fragile Dreams isn’t filled with monsters, or zombies, or mutated humans. The most common enemies you’ll fight in this game are ghosts or dogs that, without humans, have returned to their original feral state. The cats are still cool though. 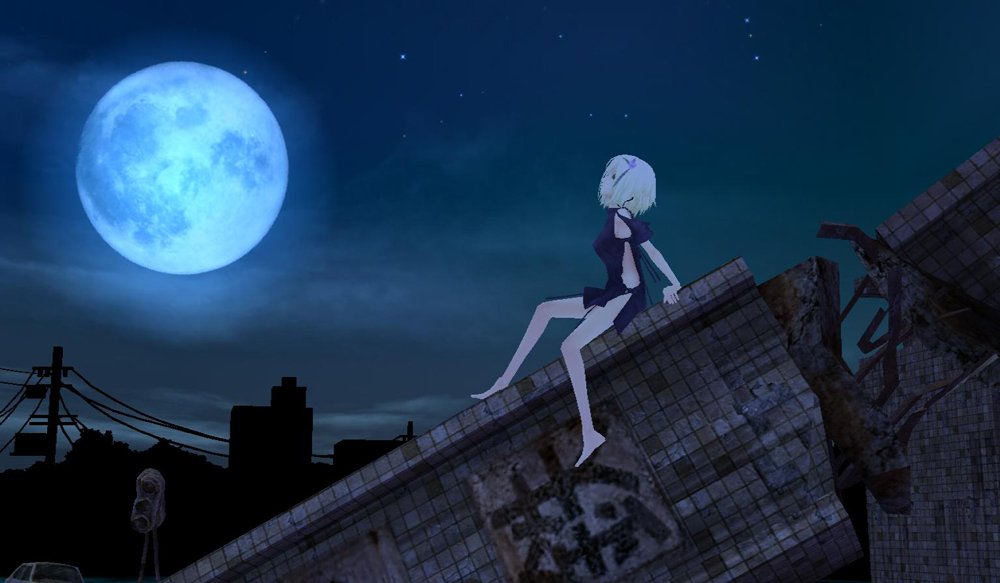 The first time I ventured toward that red tower, I was most concerned with Seto’s survival. I fought any and every creature that stood in my way. On this return visit, I approached it with a more caring mindset. Seeing the glowing eyes of these ravenous dogs didn’t bring out the fight in me, but rather the desire to let them be. They’re just dogs doing what they have to do to survive. The same goes for the ghosts. While there are certain yokai you can’t avoid fighting, you can bypass most of the jellyfish ghosts you encounter. Even if that ultimately sets you up for failure later in the game. This is still an RPG and as such, you’re expected to gain XP through killing these ghosts.

Initially, I was ready to smack the hell out of them at any cost. But in a moment of error, I succumbed to my injuries from a group of arms reaching out of a bathroom wall. And on the Game Over screen, I saw Seto’s jellyfish ghost floating away. That’s what’s so tragic about all of this. These ghosts were just once people, people you read about and sympathize with and mourn over when you find their chachkies. This is what I mean when I say this is a world built on sorrow. Guiding Seto through each of the areas doesn’t give me a sense of accomplishment as it would in other games. Rather, it merely gets my hopes up before crushing them with the next realization of what has become of the world and the people who once populated it.

Playing Fragile Dreams in the era of COVID has given me a new appreciation of what Namco and Tri-Crescendo managed to pull off more than 10 years ago. Admittedly, many of its aspects have aged horribly or weren’t even that good to begin with. But it’s a wistful experience, one soaked in solitude and heartbreak, driven only by the hope there is something better on the horizon. That’s what the tower was to Seto, a chance at a better life. There was no guarantee it was waiting for him once he arrived. If you’ve beaten Fragile Dreams, you know exactly what is and isn’t there. But in the hours leading up to that arrival, it’s the hope there is something beyond the bleak existence he knows that pushes each foot forward.

For us, that red tower is the vaccine. It’s the shining light we can see on the horizon. Like Seto, we hope our tower will also bring a return to civilization, a reclamation of the life we once knew. But there’s no guarantee that’s what’s waiting for us once we complete this journey. We just have to keep pushing forward on the hope there will be something worth the time, effort, and lives lost once we arrive.

I should probably focus on more social games to get me through the next few months of the pandemic. The last thing anyone needs at a time like this is to go through a game that is somehow not a form of escapism. But I am thankful I made this journey once more. I’ve grown a lot in a decade and in my return trip, I was able to find a greater appreciation for Seto’s world and connection to it I never had before. I just wish the circumstances of my world could have been better so I could make the same strides with a more lighthearted experience.