The announcement of GetsuFumaDen: Undying Moon caught me off guard. It’s like running into your human wreckage of an ex. You thought all they did was gamble away their money constantly, but here they are talking about their new job like nothing ever happened. You start remembering all the good times, you dare to believe that maybe they’ve finally cleaned up their act. Maybe Konami has really changed and this is proof of that. Truthfully, I’m expecting to wake up and find my wallet and jewelry missing.

What’s weird about this, however, is that GetsuFumaDen: Undying Moon is actually based on a Famicom exclusive title from 1987; Getsu Fuuma Den. It was never released in North America, it never received a sequel, all we got were some cameos in games like Castlevania: Harmony of Despair, while Japan would see him again in the Wai Wai World titles. I wouldn’t go as far as saying the series was forgotten, but when Konami is sitting on a treasure trove of marketable franchises, it’s strange to see them reach this far into the bucket.

Of course, it’s unlikely you’ll need to be versed in Getsu Fuuma Den to understand the new game. It’s technically a sequel taking place 1000 years later, with the actual core gameplay being completely different. There is a connection there for fans, but likely nothing so intense you’ll need to have the background. Nonetheless, let’s take a moment to get acquainted with Konami’s not-quite-classic. 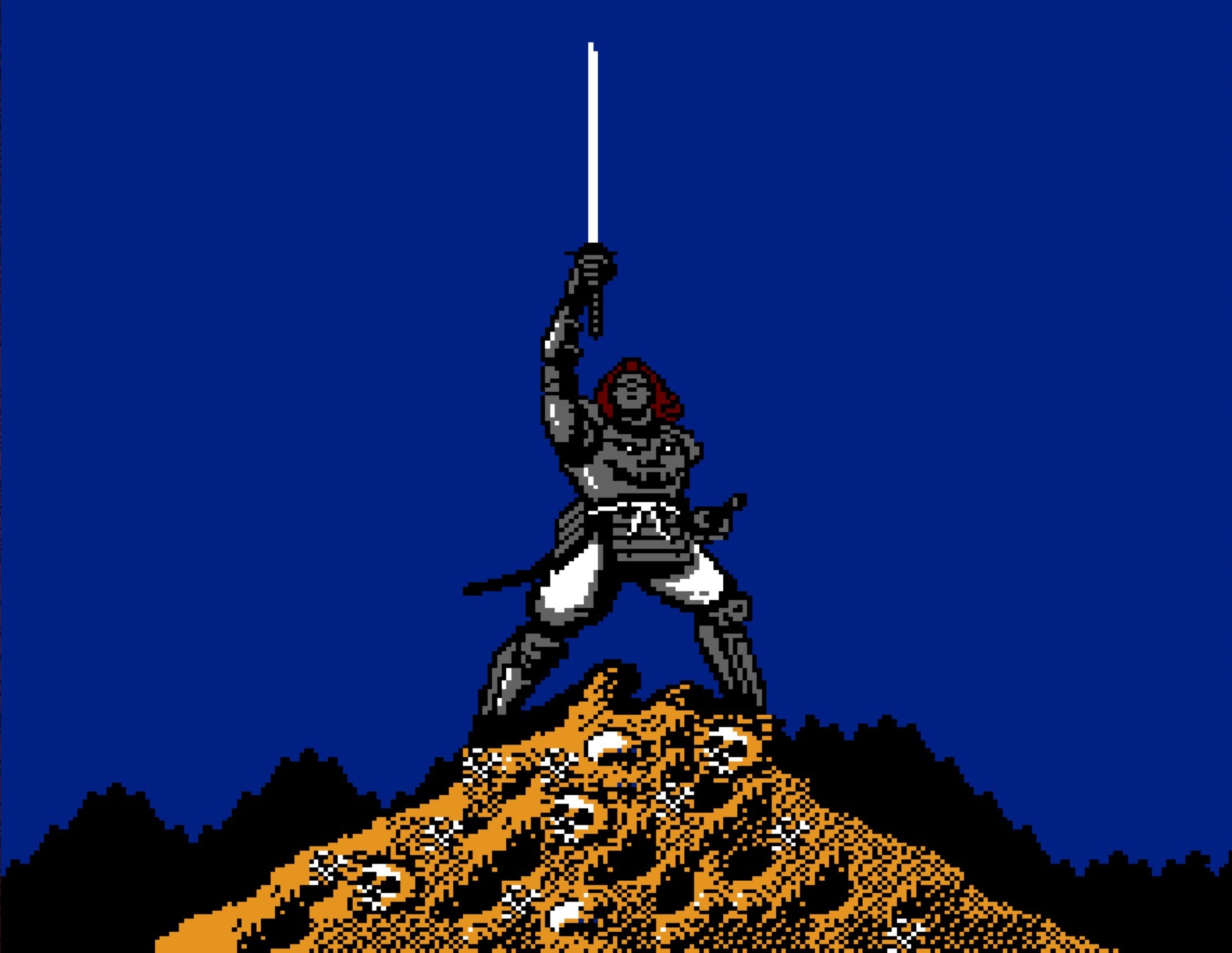 Getsu Fuuma Den is the story of Getsu Fuuma (the den is short for “densetsu” or “legend”). His two brothers ventured off to defeat the Ryukotsuki and were defeated. As the last Getsu brother, he has to venture into Yomi to retrieve three swords and defeat Ryukotsuki. Yomi, in case you weren’t aware, is the Japanese Shinto version of the underworld. It’s typically translated to “Hell” because it’s a dark place that dead people go, but I find this to be inaccurate. It’s more like the ancient Greek concept of Hades in that everybody goes there when they die, regardless of whether they are good or bad.

In any case, Yomi is depicted as an overworld maze. You walk along paths, attempting to find your way around, and are blocked by various Shinto gates. Once you bump into one of these, the game transitions into a side-scroller where you have to get from one end of the screen to the other, depending on which direction you were heading in the overworld. 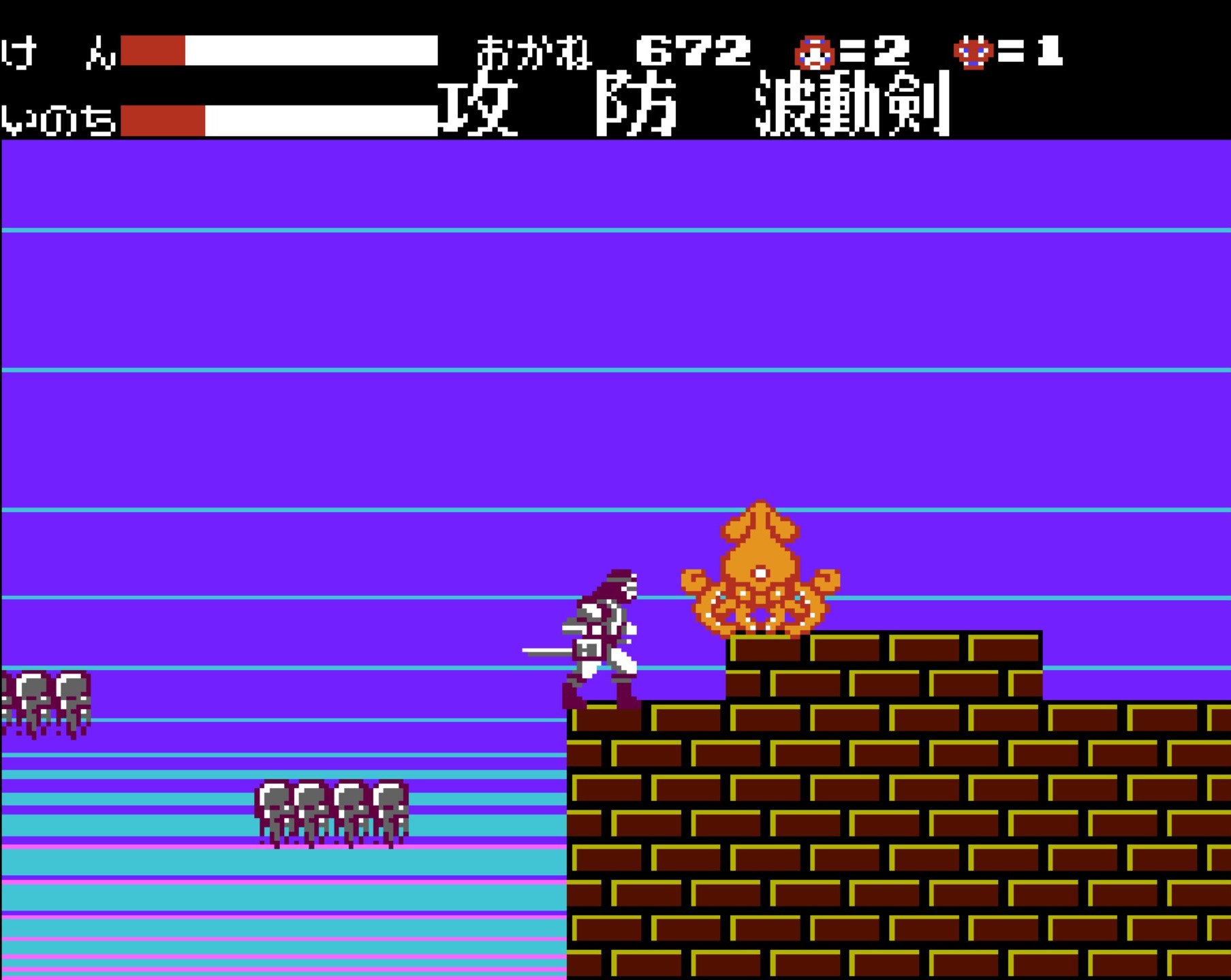 It’s often considered to be a sort of sister title to Castlevania, but don’t get too excited. While they’re both side-scrolling action games with dark themes, that’s generally where the similarities end. Castlevania is a strictly linear but well-crafted experience whereas Getsu Fuuma Den is as slippery and sloppy as a turkey avocado sandwich.

Don’t get me wrong, it’s not bad, but get a hold of those floaty controls. You’re given a life bar the length of a Twizzler and you’ll need it, because the combat is just as loose as the movement and you’ll take your hits. A lot of enemies just charge at you and take two hits that are usually difficult to land before they make contact. The levels are slapdash collections of ledges, pits, and hazards that throw enemies at you just, like, wherever. It’s pretty far removed from Castlevania’s extremely thoughtful design, but there’s also about a million more levels than Castlevania had.

The truth is that the design just has completely different focuses. Getsu Fuuma Den is more of an action-packed murder sprint as you cut your way through the denizens of Yomi. The floatiness of the controls is something you’ll probably get used to eventually, I just want to set expectations here. Getsu Fuuma Den is not Castlevania. It just looks the part. 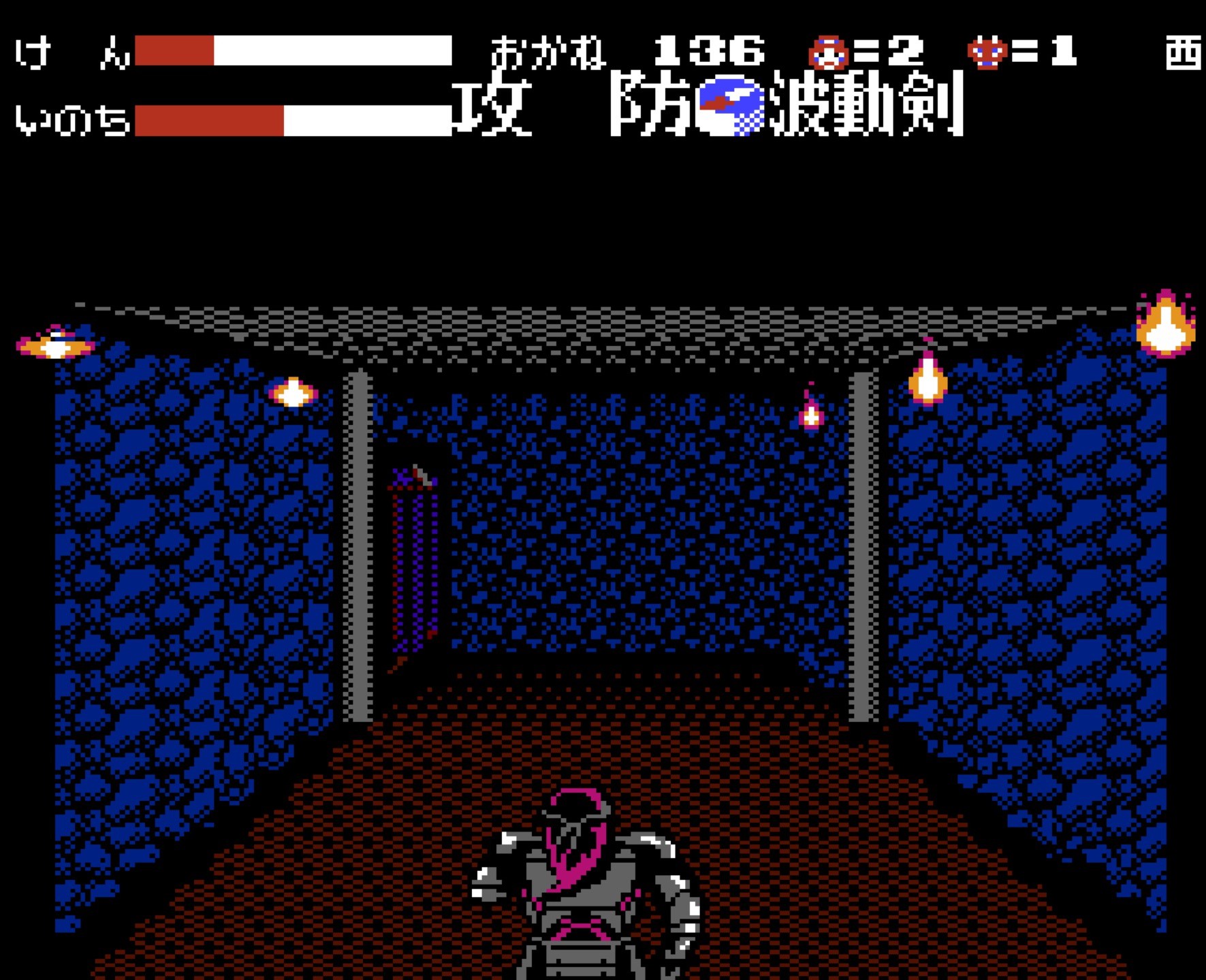 The point of your exploration is to find a “Demon Pass”, given to you by winning a boss fight hidden somewhere in the world. Once you have that, you can continue on to one of the islands where you search for the dungeon.

The dungeons are little third-person mazes, not entirely unlike the ones in Ganbare Goemon, and yeah, it might be a good idea to grab some graph paper to make a map in case you get lost. Also, don’t go in the first one until you have bought the candle and compass from the shop. Within, you’ll find some sub-boss battles before you finally reach the head honcho and defeat him in side-scrolling combat. You’re rewarded with a sword. Repeat twice more.

I feel like I’m underselling the game while trying not to oversell it. Getsu Fuuma Den isn’t a rock hard classic like Ganbare Goemon 2 or Contra, but that doesn’t mean it’s not fun. The color palette takes some getting used to, but the music is absolutely fantastic. The overworld theme in particular is catchy as hell and almost worth just sitting on the map screen to listen to.

Otherwise, the boss battles are pretty weak and the mazes are going to irk some people. Just set your expectations accordingly, and you’ll have a good time. 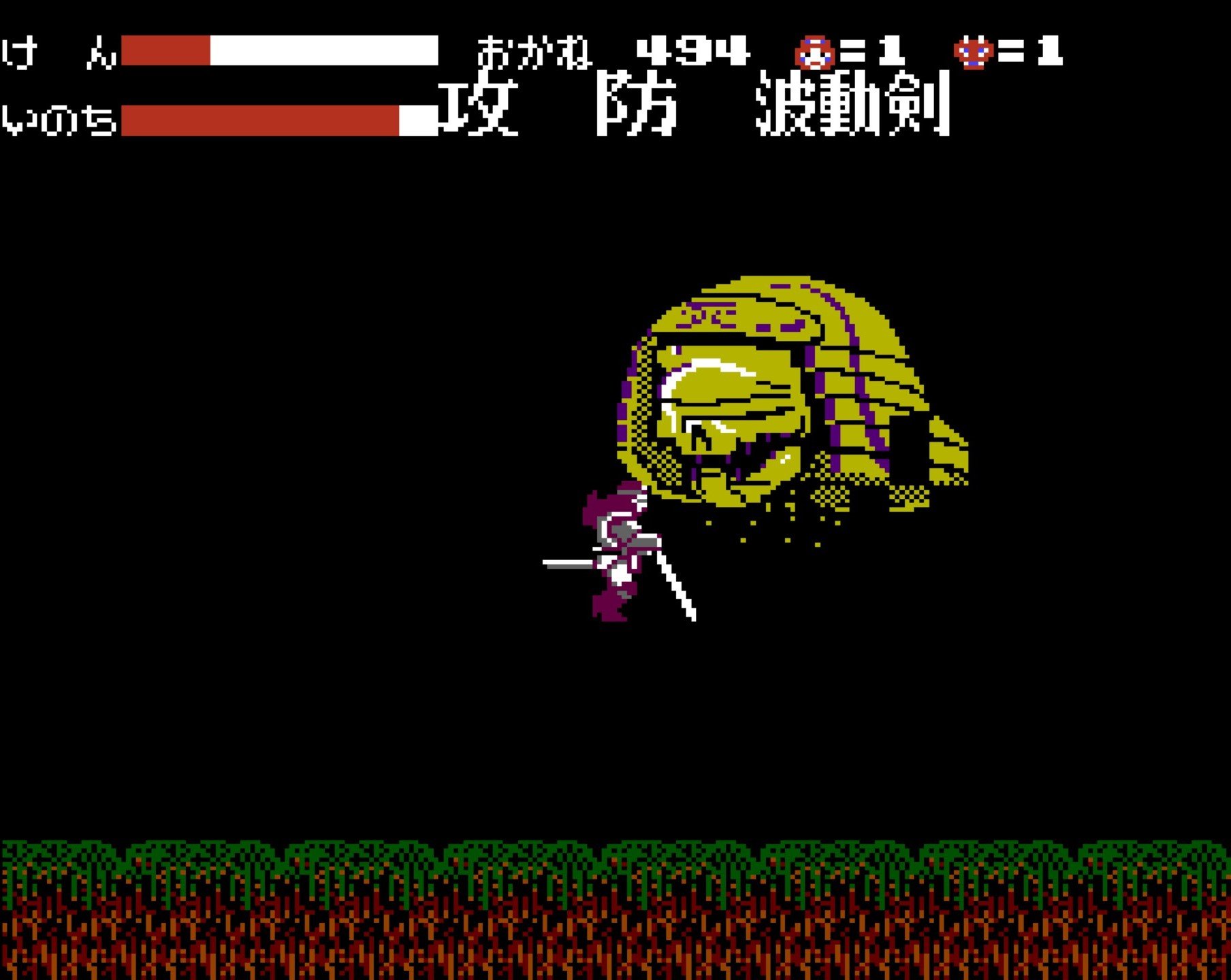 I personally love Getsu Fuuma Den, warts and all. It may be because it was part of my first run of Famicom games that I imported, or it may just be that it’s more than the sum of its parts. It’s stupid, sure. It’s unpolished, yes. But it’s got style for days and there’s something captivating about it. Try it yourself and see what you think.

Getsu Fuuma Den is something of a Konami staple, and as such, it has been ported to Nintendo’s various Virtual Consoles. Never in North America, however, except… *gasp*, people who buy GetsuFumaDen: Undying Moon in early access will get a copy of the Famicom game ported to PC by M2! Oh… It’s still in Japanese only except for the option menus. Well, that was a roller coaster. In the meantime, there are fan translations out there.

It’s a shame, too. There’s a lot of text in Getsu Fuuma Den, and while it is completely possible to play without understanding any of it, you’re missing out on a lot of flavor and the entire story. I’d say that this is probably the best we could expect from Konami, but honestly, they recently released the Famicom version of Kid Dracula in English alongside their Castlevania Anniversary Collection, so there is precedent. Maybe if this new title does well enough they’ll decide to go the extra mile. Or, maybe we’ll just discover them crying in front of the pachinko parlor.