Getting up to speed with Strider

Strider was…well, it wasn’t a big deal at Tokyo Game Show 2013. It could be found at a couple of places on the show floor, but you had to look for it. But I didn’t need any fanfare or huge signage to want to try it out. I mean, who doesn’t like Strider? Or at least the idea of Strider.

The franchise games and their spiritual successors have been all over the map (though I really dug Moon Diver). This one, while still a side-scrolling slasher, also comes from a different area of the map. Double Helix’s Strider moves like a ninja, but he moves and fights even faster than the fastest ninja ever dreamed. Shinobi would look like a turtle in comparison.

In playing the demo I very quickly found that trying to “clear the screen” wasn’t the best way of going about things — the longer I hung around in one place, the faster I died. I was being heckled by a booth attendant. You have to keep on moving, I learned. It isn’t quite to the level of a runner, but you are best served by keeping a move on, stopping at most only briefly to clear a path with your sword.

The other change to the formula adds pathways that have you moving up through ducts or down ladders, like a fast-moving Castlevania, but with a katana instead of a whip. The guidance I had been receiving at the booth to “keep moving” stopped being valid as soon as I had to slide kick through a duct and then double jump up to grab a ledge. I didn’t like how my movement had to stop to change paths at first, but I got used to it after a bit. 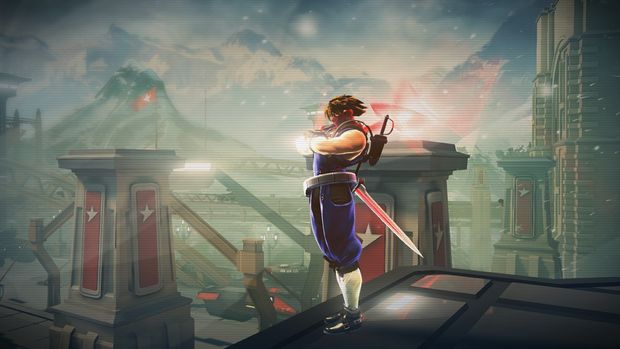 So it’s move, slash, climb, in that order, with a heavy reliance on your reflexes and sense of direction. After getting a hang of how I needed to both keep moving and keep an eye out for my next path change, I was doing rather well. It didn’t take long to warm up to the mix of moving and slashing. The flow is nice as most enemies go down fairly easy. It’s fun — they just sort of pop. Throwing in jump attacks for some flair kept things entertaining as I progressed on my way towards the more difficult sub-bosses.

The demo boss was a massive robot snake that I had to ninja scale to take down. The scene had both the snake and Strider moving along at high speed through the air, and it looked outstanding on the Xbox 360. 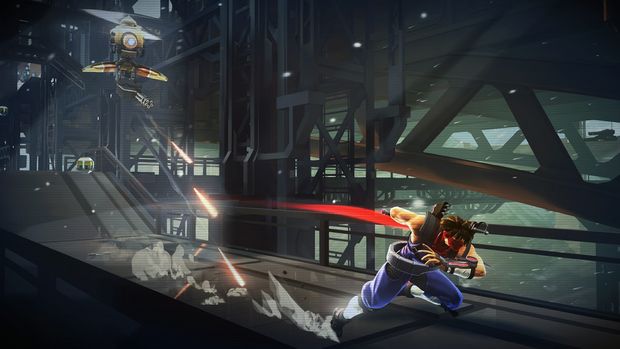 Again, when you’re moving, Strider feels really good. I expect that the branching paths will be a point of contention for some. It’s certainly not a deal breaker, and the balance of the two elements could weigh out differently in the full game, but I found that I just wanted to keep on moving after I got started. Stopping, climbing, and finding my way felt like too much work.

Strider’s TGS demo wasn’t long enough to get a feel for the game’s world or how its power ups fit into it, but it was long enough to let me know that the gameplay felt great. For me, that’s enough to be excited about this game.