We saw Destiny running, live, on multiple PlayStation 4’s, and I’m suddenly a bit more into the whole ordeal. We began on a run down Earth in the same spot last night’s Sony press conference featured. In the more intimate, closed-doors setting we got to take a bit more time to stop and smell the roses, which turned out to be just what I needed.

The game is ridiculously pretty. We were shown off the dynamic lighting system which will give areas different feels based on time of day, helping to sell the world as a livable, believable place. Every blade of browned grass rustled in the wind as the trees bent and creaked against the breeze. Both on the large and small scale, the game world is picturesque and alive.

After an amazing, third-person dance taunt, the team of heroes headed inside and I was sad to say goodbye to the sweeping vista — until they walked into the beautifully realized indoor environments. 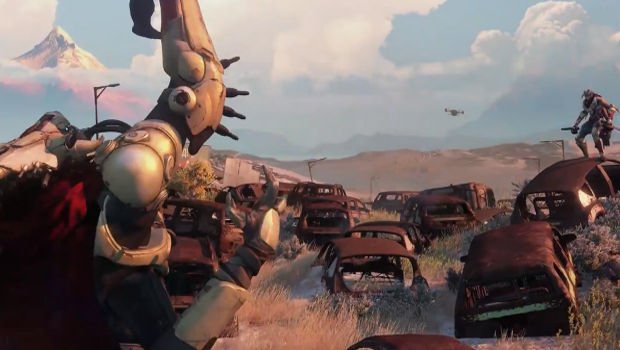 The run down indoors the team began crawling through was impressive. The dynamic lighting, both natural and man made, looks gorgeous and really adds to the game. In the eventual boss fight, the luminescent, halogen-looking lamps produced haunting, long obsidian shadows across the vacuous corridor and it looked stunning. The game is incredibly pretty.

At one point, your chatty “ghost” companion serves are you lamp in a pitch black area. As he floats away to bring power back to the area, you’re left in a consuming blackness and seeing hit light reflect off all the various level geometry as he flits throughout the environment and it’s fantastic. There’s something about pitch black — or barely lit — portions in games I love (Metal Gear Solid 3 comes to mind).

After the power came back, however, enemies were alerted and the gunplay began, breaking my dreamlike immersion. After all, this game is still ultimately a massively multiplayer first-person shooter, and so the shooting began.

In expected Bungie fashion the combat seems tight. Headshots were rewarded with white buffs of luminescence, and I’m totally in love with the revolver that was shown off at Sony’s press conference. The cloth-draped Fallen, one of the game’s enemy types, were also impressive in motion, while theVanquish-styled slide move is rad. Speaking of locomotion, the player character’s jumping looks so satisfying. Jumps are meaty, with good height. It stood out. 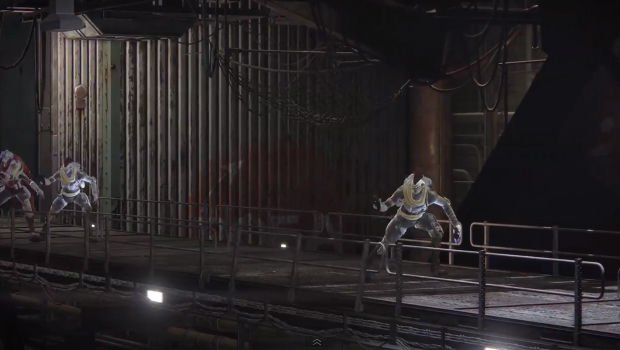 Some customization elements were also shown off, as well as notes about “exotic” weapons with cool names and even cooler abilities that can be accessed via upgrade. Loot is individually allotted, precluding cooperative squabbles, and multiple sets of armor or weapons can be taken into the field.

I wasn’t impressed by Destiny before, but I’m more than interested now that I’ve seen it running in-person. A part of me sort of begrudged remembering that, at the end of the day, it’s a first-person shooter, but it’s a damn fine-looking one all the same.