Of all the games that we’ve seen at BitSummit, few are more uncomplicated than Monken. Ultimately, Monken boils down to “knock buildings over quickly.” Don’t let its easy-going premise fool you, though. It’s a lot tougher than it looks.

Monken is an action game where you play as a crane controlling a wrecking ball with the goal of destroying one building per level. Everything’s handled solely through the up, down, left, and right keys, as you try to build enough momentum for effective and swift demolition.

That’s the tricky part. Even if you get a really solid swing in, the impact will often completely kill any momentum you had, leaving you to try to recapture that coveted speed. The entire experience toggles between invoking feelings of zen-like mastery and infuriating incompetence. 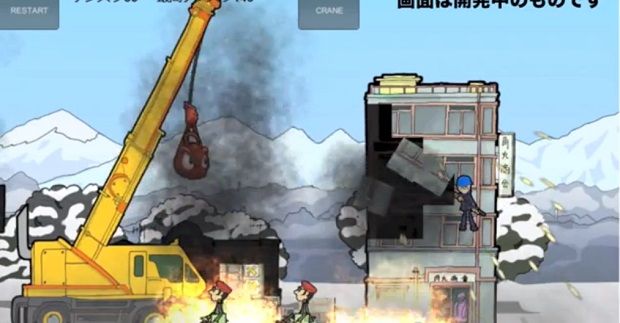 But why would you want to knock buildings down? Because a terrorist with a cloud for a head has taken hostages inside, of course. The game’s inspired by the Asama Lodge Incident that took place in Japan in 1972 — a 10-day standoff in which the police used a wrecking ball to try to enter the lodge. The subject material’s a tad dark for such a cheery looking indie game, but to each their own.

Given that there are hostages to save, each level has a time constraint, and not knocking the building over by the time it runs out is the only way to fail. This makes it incredibly frustrating when you can barely get the ball to tap against the structure. Walking by the booth later to see someone spinning the wrecking ball in a full circle and wreaking havoc only compounded the inadequacy that I felt.

This is actually the second year that Monken is being shown at BitSummit. Last year, it was met with such a positive reception that the developers piggybacked a successful crowdfunding campaign to turn it from a concept demo to a full-fledged game. After all, it’s easy to see the appeal; sometimes you just want to knock stuff down.