It's time for my follow-up appointment with Theme Hospital

Usually, I’m quite indignant about any suggestion that my commitment to the PlayStation brand could bite me full force in the arse. I’ve grown complacent about the fact that everything I want either 1) comes to the PS4, or 2) is so bare-bones in terms of its technical requirements that my cheap-as-chips elderly laptop can handle it, no probs. And if you were to suggest that I piece together a decent gaming rig and stop being so horribly dependent on Sony, you may as well be asking me to remove someone’s appendix.

But indeed, it has come back to haunt me, since I currently have no way of running Two Point Hospital —yes, my laptop is that craptacular. The game is a tad more than a spiritual successor to Theme Hospital, with key figures such as Gary Carr and Mark Webley involved in both games, and operates on the same principle, but with more finesse. Despite the relatively high price point for a non-AAA game, I was very excited about the release of Two Point Hospital, precisely because Theme Hospitalwas a milestone in my gaming history.

In fact, it is a cornerstone of my gaming history in so many ways. It was not only instrumental in igniting my interest in games, but it was the first title I ever wrote a proper blog post about. What’s more, Bullfrog Productions were the first game production company I considered myself a fan of, starting back with Theme Park but fuelled even further byTheme Hospital. So, what was so special about TH and why did it and its siblings attract me to management sims more than its competitors? Grab a KitKat from a nearby vending machine inexplicably placed in the middle of the floor while I regale you with a bit of the history behind Theme Hospital, my background with the comedic cult classic, and a little bit of information on what followed for Bullfrog Productions.

The release of Theme Hospital

Theme Hospital was first released for the PC in March 1997, with a PlayStation port arriving the following year. As already mentioned, the game was originally developed by Bullfrog Productions, though Krisalis Software did work on the PS port. While Peter Molyneux came up with the idea alongside James Leach, Molyneux left the bulk of the work to his team while he focused on what would become the critically-acclaimed Dungeon Keeper, which was released just three months after Theme Hospital.

The level of control it gave you in running a well-oiled healthcare moneymaking machine, combined with great UI work, was laudable for the era in which it was launched. You could pore over balance sheets and isolate individual points of financial weakness, if “winging it” wasn’t your thing; furthermore, to build a successful hospital, you had to have a knack for complicated fields such as architecture and HR. Building a staff room too far away or messing up a corridor layout could be enough for disgruntled employees to threaten a walk-out or for patients to get lost. Yet all of this was conveyed in an entertaining manner, perfectly striking the balance between micromanagement and good fun. 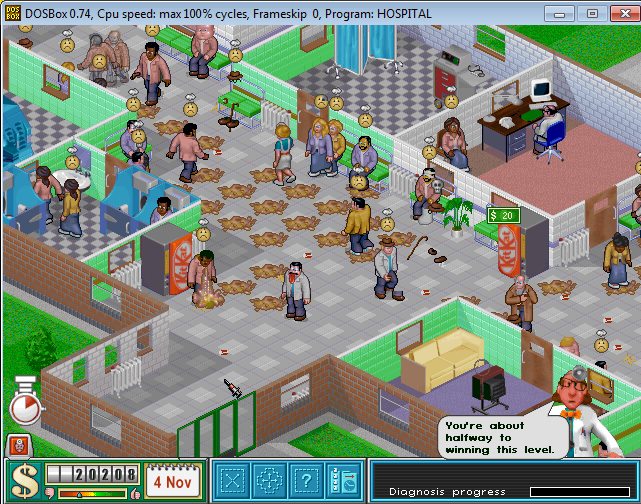 The characteristic daftness of Bullfrog Productions’ games, as evident in the highly sarcastic Theme Park (released for a variety of PC and console formats starting in 1994), was amplified in Theme Hospital. The production team wisely decided to use made-up diseases instead of going for realism. Bloaty Head disease, and the treatment of popping your afflicted patients with a needle like a helium balloon, was surely one of the most ridiculous ideas ever injected into the traditionally stodgy management genre. It ranks up there with deliberately not repairing your bouncy castles in Theme Park and waiting for them to explode, ejecting hapless park attendees 20ft into the air. There were a couple of extra perks for pop culture fans, such as Hannibal Lecter being called to see security by the receptionist, who provides a dry dose of wit throughout the game.

This sweet little package of tough-as-nails management sim (just you wait ’til you get to the last hospital, Battenberg) and slapstick wonder earned it high praise on release, getting an 8/10 in Edge and 85% in PC Gamer UK for the PC versions. IGN and Gamespot were both favourable about the PlayStation version, though Gamespot was quite critical of the PC original. If you are inclined to take a trip to the yesteryear of medicine that doesn’t involve trepanning, you can pick up Theme Hospital for PC on Origin and on the PS Store as a PS1 Classic (in the US — it has been removed in the EU. Boo hoo.)

Theme Hospital wormed its way into my heart, and I refused all medication

The question remains as to why Theme Hospital was so near and dear to me that I wrote one of my first ever pieces for Skirmish Frogs on the game, followed in short order by Theme Park World/Sim Theme Park. It’s hardly your universally acceptable Mario or Zelda game that kids stereotypically cut their teeth on and it’s not really playground bragging fodder.

Well, my gaming habits were not influenced by my friends as a child — I was influenced by my aunt. As a young child of probably just five or six, I had farted about with the PS1 controller while my aunt was constructing “Potatoland” in Theme Park, and by the end, I just about understood what was going on. The more complicated management tweaks you could carry out in that game involved gaming the fry stand prices and salting them so heavily that all your park visitors would surely make a reappearance in Theme Hospital for hypertension issues. So, when my aunt went out for the day once and my grandma let me fiddle about with her computer, the first thing I did was boot up Theme Hospital. Probably into a save file and not a new game.

Readers, it was a disaster.

I was bankrupt within 15 minutes and had no idea what had gone on. Theme Hospital from that point in time became the game I enjoyed watching my aunt play, but for which I would remain resolutely hands-off; exactly the same as withTomb Raider III and Command and Conquer: Red Alert. In a way, it was my first introduction to something analogous to Let’s Plays and watching Twitch streams — I got great amusement out of my aunt’s reactions and chatting about what was going on on-screen, but I was happy to forgo active participation myself. 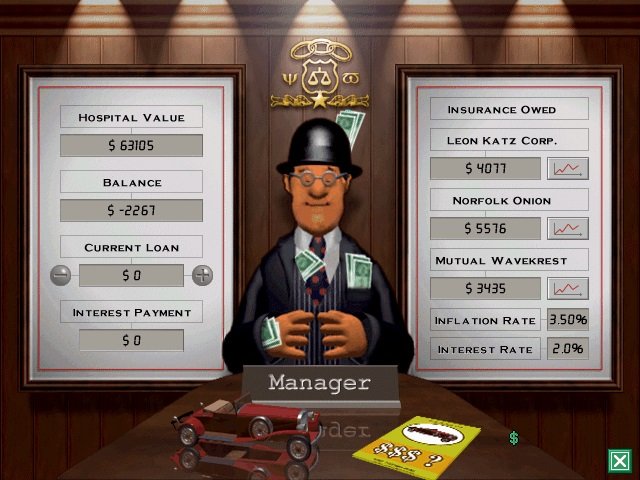 When the game was being offered for free over a decade and a half later on Origin, of course, I broke this spell and went all in. Battenberg proved too tough a cookie to crack, but I loved all of the preceding levels, even if I wasn’t naturally gifted at handling a budget.

A few things were noticeable on my new playthrough of Theme Hospitaland became even more apparent when I flirted with the game recently for speedrunning purposes. As a child, I had not really picked up on the biting satire it offered on the US model of healthcare. The receptionist chides patients into bringing their chequebooks with them; you get money by experimenting on your patients and boasting more expensive treatment options in your facilities.

Medicine as a service, and one that snatches at your wallet, is something that naïve young Charlotte was not aware of at all. As time has gone on and I’ve seen the intro to the game a few more times, it makes me sad more than anything. It reminded me of how I have it easy. I still find the cynical commentary in the game sort of funny, but it’s just so close to my experience of reality that it has a bitter aftertaste now.

Another difference from my experience as a very young child is that in the intermediate period, I have played a heck of a lot of The Sims. SimCity is another series I peered at over the shoulder of my aunt, but playing God on such a large scale never fully appealed to me: I wanted to mess with people’s lives on a much more personal level. The Sims tapped into that well of benign narcissism and megalomania that is unparalleled in bored teenagers. And the Build tools in both The Sims and The Sims 2 showed up Theme Hospital’s clunky room design and lack of control as to where you could place fixtures. Where I once considered myself a staunch follower of Peter Molyneux and Bullfrog’s work, Will Wright and Maxis usurped that position in the early 2000s, and The Sims series left Theme Hospital looking a little primitive in its wake.

Although shinier management sims caught my eye in the early-mid 2000s, I did often check the PC section of Electronics Boutique, HMV and GAME for a follow-up or anything similar. I could never find anything to my tastes, and not following gaming news closely as a tween/teenager, I had no clue about what had happened to Bullfrog and Mr Molyneux.

Alas, Peter Molyneux jumped ship from Bullfrog just months after the release of Theme Hospital, an important move without which franchises such as Black and White and Fable may never have materialised.Bullfrog Productions carried on until 2001, making my (controversial) favourite Theme game of the lot, Theme Park World/Sim Theme Park. In my defence, my love of a non-Molyneux Theme game stems from the brilliant voice work done on the PAL version by Lewis MacLeod.

Overall, I am reluctant to revisit Theme Hospital through Two Point Hospitalbecause my experience of the original was so potent. However, on second thoughts, there is a lot about Theme Hospital that left me cold on replaying it as an adult with much more gaming and comedic experience. Through offering a state-of-the-art and polished experience, Two Point Hospital could be just the antidote to the jaded feeling I get when I return toTheme Hospital, a game packed full of good ideas but which definitely shows every single one of its 21 years.

I just have to keep my fingers crossed for a console edition or get that baby gaming rig together.

Did you enjoy playing Theme Hospital twenty years ago? Do you have any games you returned to as an adult, only to be slightly disappointed? Are you having fun with Two Point Hospital right now? Let me know in the comments down below!