Just stop Bluto from punching that baby this Famicom Friday

We’ve been friends for a while now, right? And after all these Famicom articles, you’re probably thinking, “gee, that lady sure does know Japanese.” That’s not true. My Japanese can best be described as existent. I can sometimes take directions and pick out the odd word from a sentence. I can read some parts of instruction manuals, just enough that I can figure out what is a power-up and what increases your speedo. I was able to tell someone I don’t drink coffee, and I know the difference between a densetsu, a daibouken, and a monogatari.

So, no, I’m hardly fluent in the language. I don’t study as much as I should. Famicom games just rarely require a high level of comprehension.

So, for this Famicom Friday, we’re going to get a little vocabulary practice in using Popeye no Eigo Asobi or (and I’m using my actual language skills to translate this) “Popeye’s English Game”. Or play. Or pastime. Let’s go with my first translation. 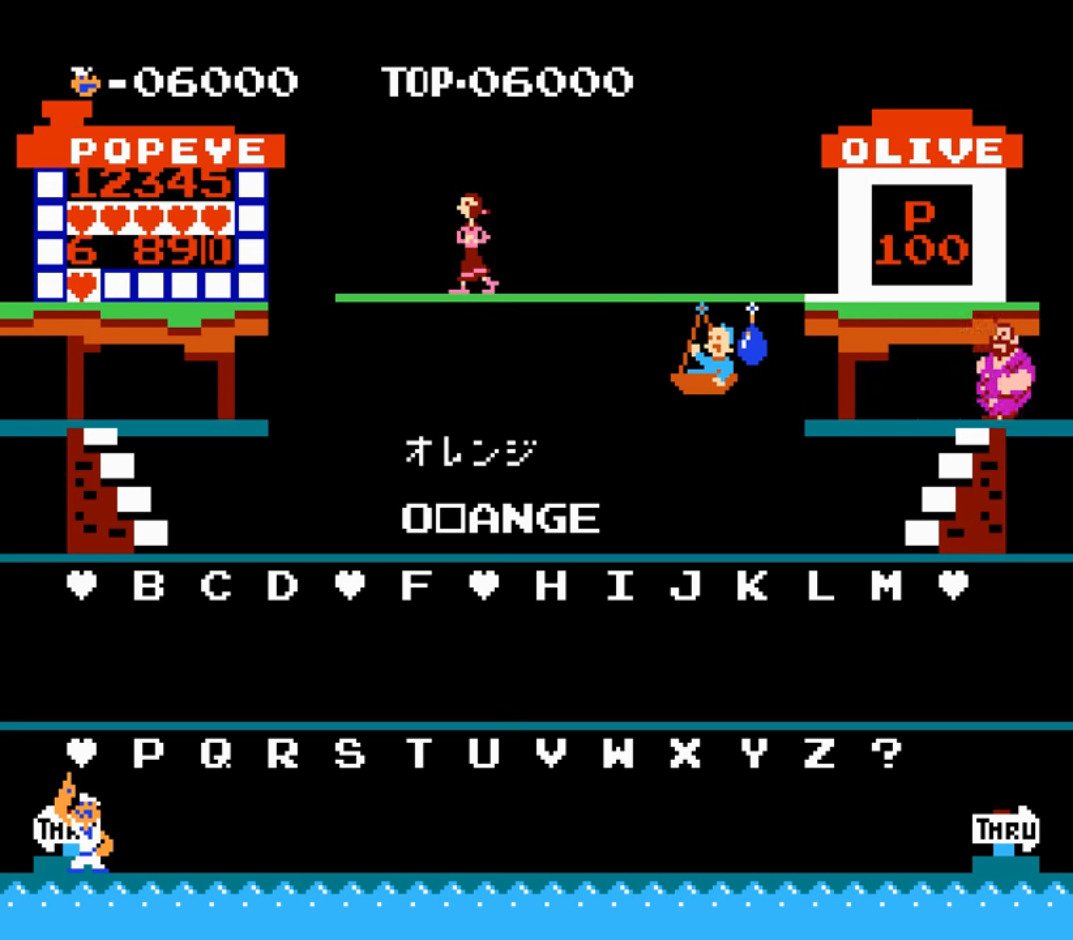 If you can’t tell from the name, Popeye no Eigo Asobi is a game to teach kids how to speak the English language. That may seem like it has absolutely no application to you or me, however, it’s vocabulary, so it works perfectly fine in reverse so long as you have the basis in katakana (and you can honestly learn it in, like, a week maximum. I believe in you.) The game plays by giving you a word in katakana and having you guess what it is in English. It’s letter by letter like Hangman or Wheel of Fortune, so you don’t have to know the word outright.

At least, that’s what Word Puzzle A is. Word Puzzle B just gives you how many letters a word is and you guess letters until you get it. I’m not sure what the point is, even for someone learning English.

You get to select your category from six options: Animal, Country, Food, Sports, Science, and Other. It’s not a bad spread, but you’ll probably get more mileage out of some more than others. For example, a lot of countries are basically the same in Japanese as they are in English. It’s not difficult to figure out that “Angora” is “Angola” in English. Maybe “Chuugoku” being “China” will trip you up, but that’s more of an exception. Meanwhile, I rarely have to read or say the word for “giraffe”, so it’s helpful to be drilled on it. 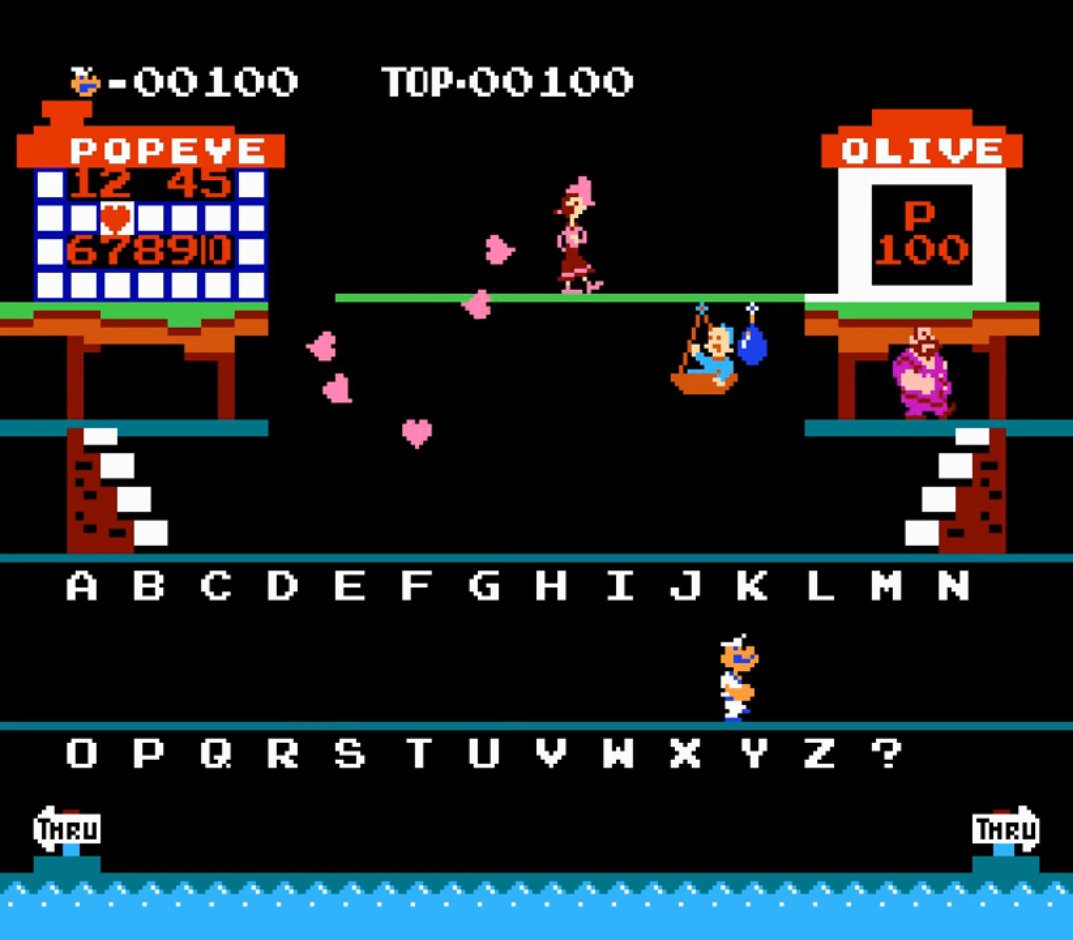 Really, the game is sort of like Donkey Kong Jr. Math in that it repurposes assets from another Famicom title to make learning tolerable. In this case, it’s Popeye, a port of the arcade game from Nintendo.

It’s a decent fit, even though I’m pretty sure Popeye fought the Japanese in WWII. You run around as Popeye, selecting letters, while Olive Oyl throws down the question using hearts, and Bluto punches a baby every time you guess an incorrect letter. I mean, what better people to teach you vocabulary than a group who only know how to resolve their arguments with heaping amounts of violence?

You may be asking if Popeye no Eigo Asobi is a worthwhile purchase if you want to learn the language. The answer is: no, absolutely not. We live in the future, and there are better ways to drill vocabulary into your brain out there on the internet. My main issue with doing it this way is it takes, like, a year for Olive to scatter her love to the ground in the form of a question, and there’s no way to speed it up. Still, I pop this cartridge every so often because there’s something unique about this form of education. 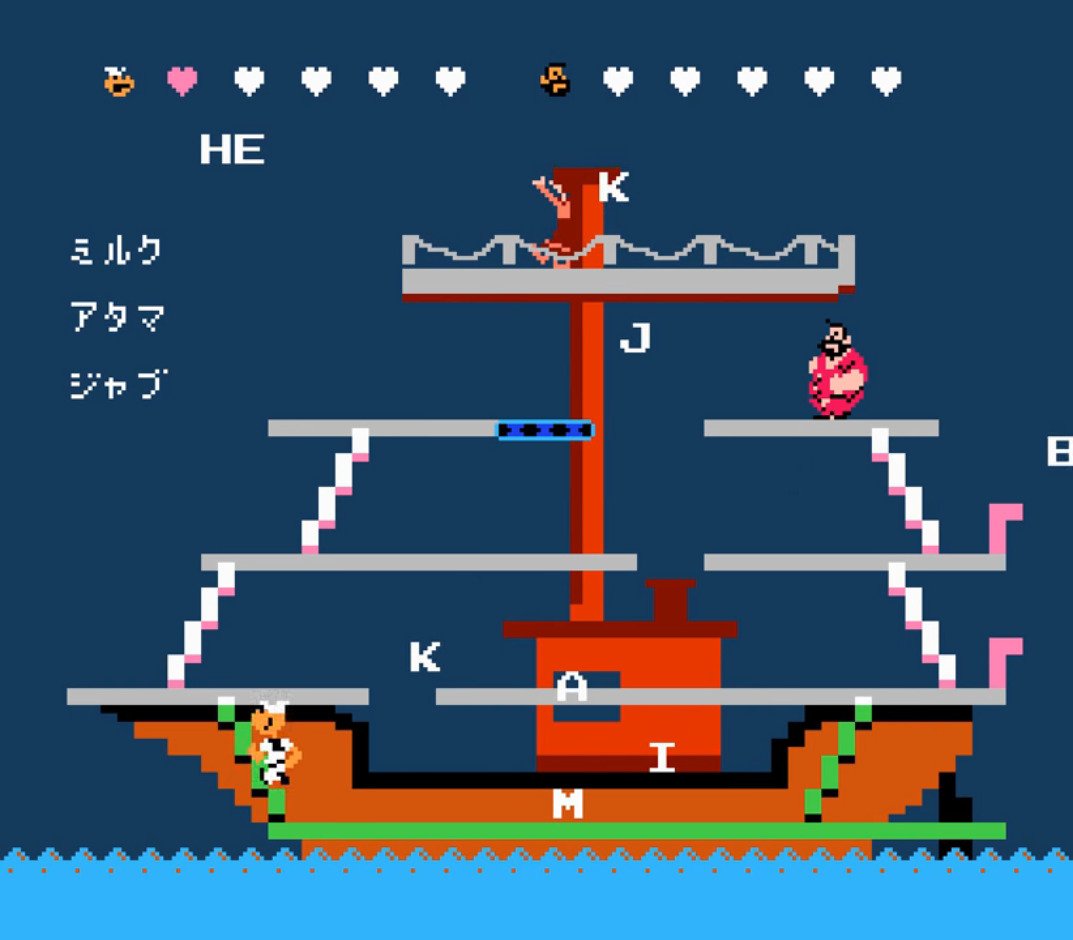 There’s also a two-player mode. One player controls Bluto and the other Popeye, and they compete to collect letters dropped by Olive Oyl to spell out the English equivalent to Japanese words. It’s a decent way for two people to study together, I guess. I mean, I think flashcards are probably more stimulating, but there’s less undertone of violence.

This may surprise you, since it certainly surprised me, but there is a fan translation for Popeye no Eigo Asobi. It essentially replaces the katakana with romaji so it can be read without needing to learn a new alphabet. I don’t really see the point, but it’s there for those who want it.

Unlike Donkey Kong Jr. Math, Popeye no Eigo Asobi has never been re-released. This is most likely due to the attached licensing, since the Popeye arcade game has never really been reissued, either. Honestly, I don’t think it needs to be. There are more efficient ways to drill vocabulary, but if you’re learning the language to play Famicom games, what better place to learn than on a Famicom?