I came into playing Loot Rascals at a recent indie-game-night event not knowing what it was, or who was making it, or anything at all about it, really, other than the name and what it implies. Loot? It’s everywhere in gaming these days, but sure, I’m still partial to it. Rascals? Great underused word!

I watched an animated intro, some of which is shown in the trailer above, and then learned that the lead designer previously worked on Hohokum (a game I love due in large part to its brilliant art direction). I still wasn’t sure what Loot Rascals was, precisely, but I knew I was on board with its vibe.

It turned out to be a card-collecting strategy roguelike game. That isn’t something I’d normally be all that jazzed about, but I ended up having a good time fighting funky aliens and robots. 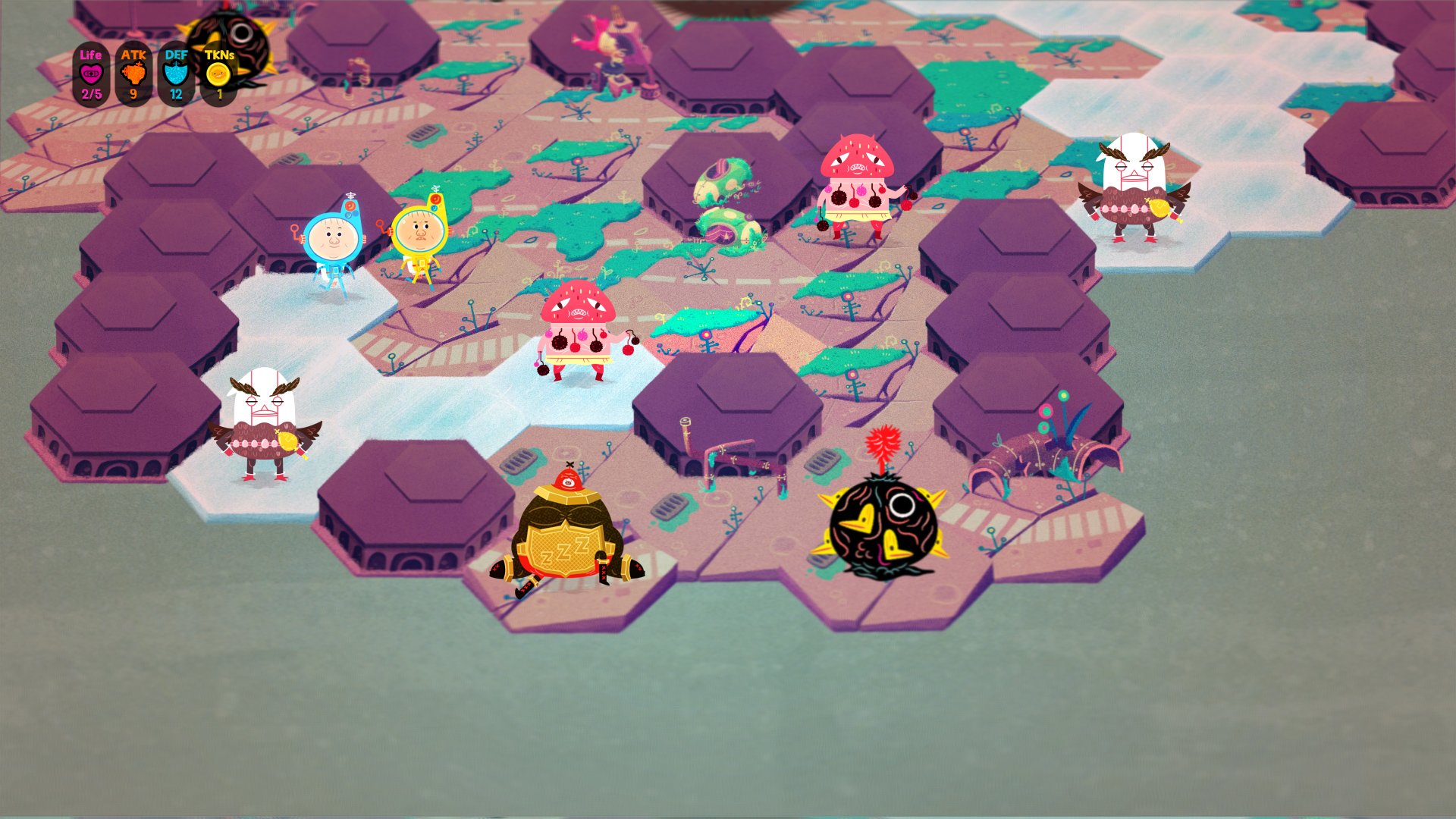 The goal of Loot Rascals is to get off the unfriendly world you’re now stranded on, and that means sussing out procedural levels to find their exit points and trying not to get killed by the many strange beasts that will block your way forward. That’s where the card collecting comes in.

Cards are a major element, but not necessarily in the way you might think. They dictate your stats like health, attack, and defense, and in some cases, also grant abilities. But you don’t actually “play a hand.” (As someone who is weirdly stubborn when it comes to learning card and board game rules, I found this reassuring.) Instead, you’re just concerned with which cards will make your little adventurer stronger and where they’re best situated in your ten-slot deck. Some cards might grant bonuses to whatever is in a neighboring slot, while others may be most effective in an odd slot rather than an even one.

When you’re not in a menu organizing your loadout or trashing extra cards for tokens, you can head back to town to take a breather or continue roaming about. Levels in Loot Rascals are set up on hexagonal grids that you move across freely in real time, but whenever you walk onto another tile, that counts as a “turn.” Enemies only move when you do, and should you bump into one, combat starts. 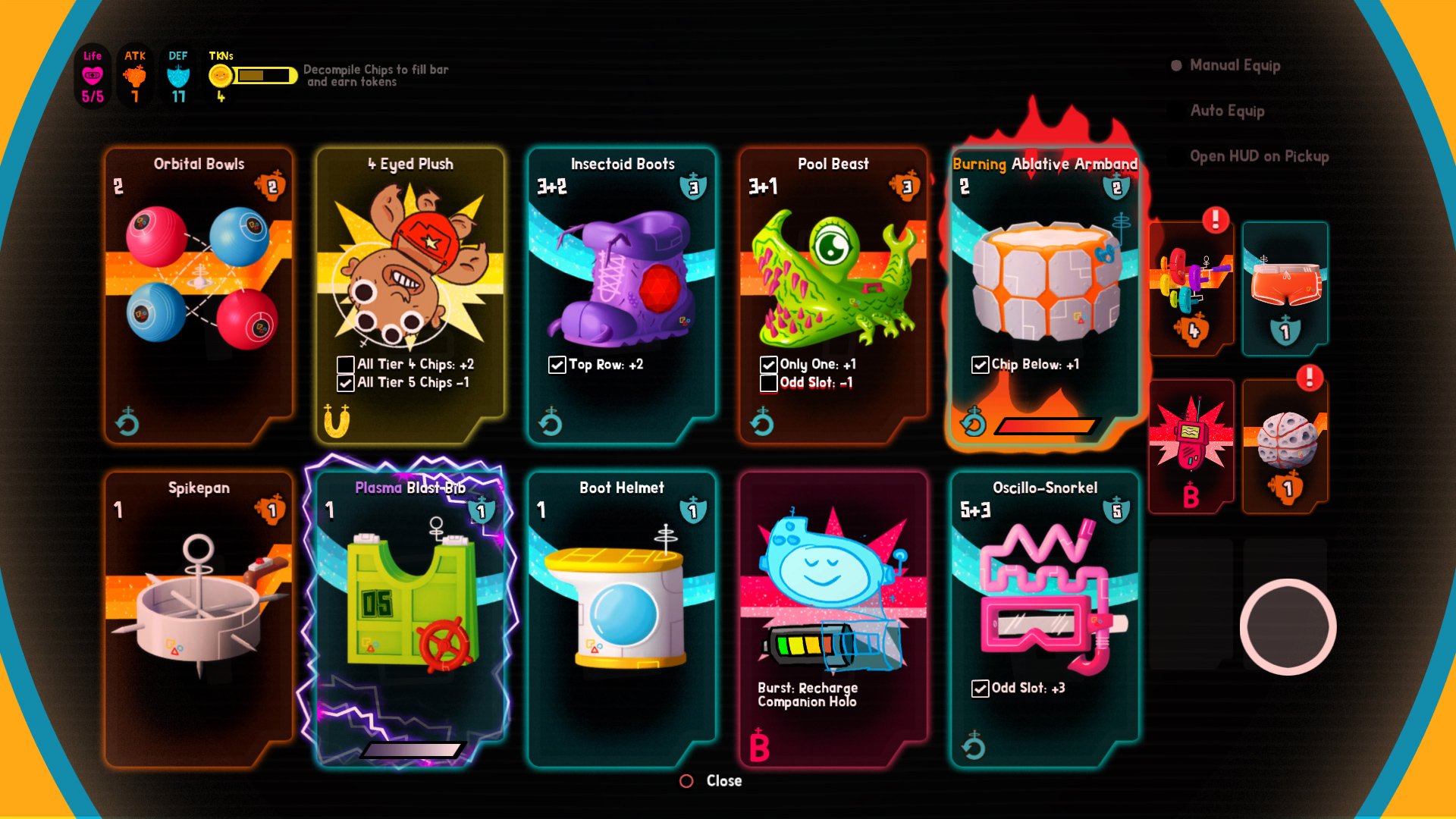 Once initiated, fighting is automatic and carries on until one of you dies. That took some adjustment. The trick is that certain foes are weaker or stronger on certain turns, so you want to wait to engage them until the ideal moment when they’re more susceptible, assuming you have that luxury. Figuring out their patterns reminded me a tiny bit of Crypt of the NecroDancer, minus the pressure to continuously follow a beat. Different types of monsters can bunch up to overwhelm or trap you, and I struggled to keep up on even the first level. There’s also the threat of increasingly dangerous creatures coming onto the field to hunt you down should you spend too much time dilly-dallying.

That is all to say Loot Rascals is harder than it looks. I’m not thrilled about the prospect of permadeath, but there is at least a neat twist. When players die, a monster will loot one of their higher-end cards and carry that with them into other players’ worlds. They’re tough, but if you manage to take the grave robber down, you get the choice to keep the card for yourself or send it back to the original owner. Depending on whether you help or hurt that player, their hologram will come into your game friendly or aggravated. I wanted to do the right thing, but I was too tempted by powerful cards. Bad call.

I wish I would’ve made it further in to get a better sense of how later levels ramp up and what more of the abilities look like, but it wasn’t meant to be. Loot Rascals left me curious and wanting more. It’s going to be a decent wait, too — it isn’t coming to PC and PlayStation 4 until Q1 2017.