I love co-op in my video games, especially when it comes to close-knit survival. There’s something exciting about a group of strangers instinctively realising that, despite their differences, they need each other to survive. Left 4 Dead is still king of this concept, but I’ve also enjoyed the tweaks in its template, leading me towards the likes of Payday 2 and Red Dead Redemption. Hell, if it wasn’t for co-op, I wouldn’t have gotten through Aliens: Colonial Marines as merciful as I did.

So the idea of an online raid, a mini-campaign of camaraderie, intrigued me. The most exposure I’d ever received before The Secret World was the infamous “Leeroy Jenkins” video and my brother playing early Runescape. I’d put it off for as long as I could, and with some inspirational words heard during a Henry Rollins spoken word show, it was time to quit being so scared of “What if?” and just bloody do it. Hopefully, it wouldn’t matter that I looked like a tit in the process.

It was about 70-80 hours in before I took part in my first raid. I was still playing the game almost blind, using an online guide for quest puzzles and not much else. By this point, I’d become pretty adept with the basics, unlocking a large array of pistol skills and quality items along the way. The Secret World still maintained a challenge for solo play, using solitude to its atmospheric advantages, but I knew I was just treading water; one foot in, one foot out.

My initial reluctance was born from the dreaded “Kicked from Lobby” message, usually associated with more complex co-op games. I love Payday 2, but before I reached the Infamy status, I saw more of the lobby screen than the heists. Now, in The Secret World, I was walking over most enemies with good gear, nice threads, and an accidental acquirement of the Quantum Brace; a powerful DLC weapon I wasn’t meant to have just yet. I had a fighting chance, or at least my avatar looked the part. So I signed up for the easiest dungeon, clicking on all the pretty coloured icons at the bottom, not thinking how essential they were later on.

The wait didn’t take long and I was dumped near the coastal wreck of the Polaris; a research ship that doubled as a dungeon. I’ve said it before, though it bears repeating, The Secret World doesn’t get enough love for its use of reality to paper over some very classical RPG traits. Dungeons don’t have to be dank crypts and endlessly winding caverns. They can be the New York subway system or the backyard of a dingy motel. It totally reminds me of the underrated Hellnight a.k.a. Dark Messiah, a bizarre homage to Monster Maze 3D set in Tokyo’s underbelly.

There were five of us in total. A divisive wild bunch to be sure. My team comprised of an undead-looking Danny Trejo, a pink-haired girl in a business suit, the gasmask fella from Slipknot on what must’ve been a smart causal day, Rutger Hauer playing John Constantine, and myself, dressed like a Gap reject.

I knew I was out of my depth with this lot, and not because I was dressed for Spring/Summer 2016 in the middle of a raging storm. While my cohorts ran around with electrified hammers and blood magic tomes, I had two pop-cap pistols and a drone that made the sound of a dying bee. That Quantum Bracer I mentioned earlier? It seemed more useful at a steampunk convention than up against these steroid-abusing freaks. 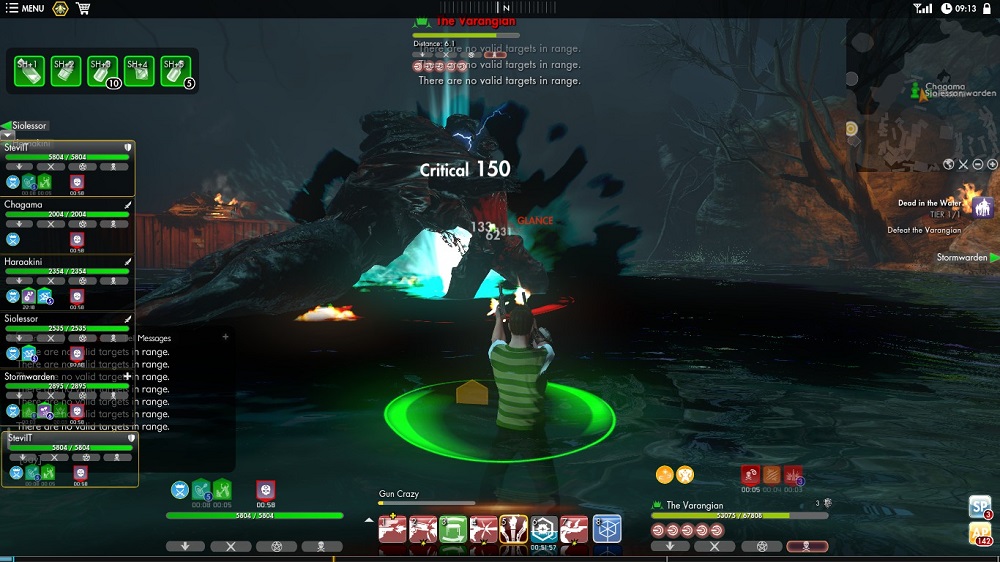 The four sprinted ahead, wiping out every supposedly overpowered creature in their path. Small hordes of zombie fishermen and mindless Deep Ones dropped in seconds, their bodies left in the briefest of wakes. Now don’t get me wrong, I did my part. Screaming, “Bang, bang, bang!” to make my guns sound more powerful was better than nothing, right?

Jokes aside, I did actually do some damage, but it was here where those old thoughts of disconnection were at their strongest. Out of all the people fighting the giant octopus with a lion’s face, I just had to be the one with the existential breakdown. Click-click-click went the mouse, buzz-buzz-buzz went the healing drone that couldn’t keep up, and all the while I thought, “What the hell am I doing? Am I actually doing anything at all? Man, this would make for a decent read about nihilistic detachment in video games. It’s a shame I’ll write a goofy virtual travelogue, instead.” 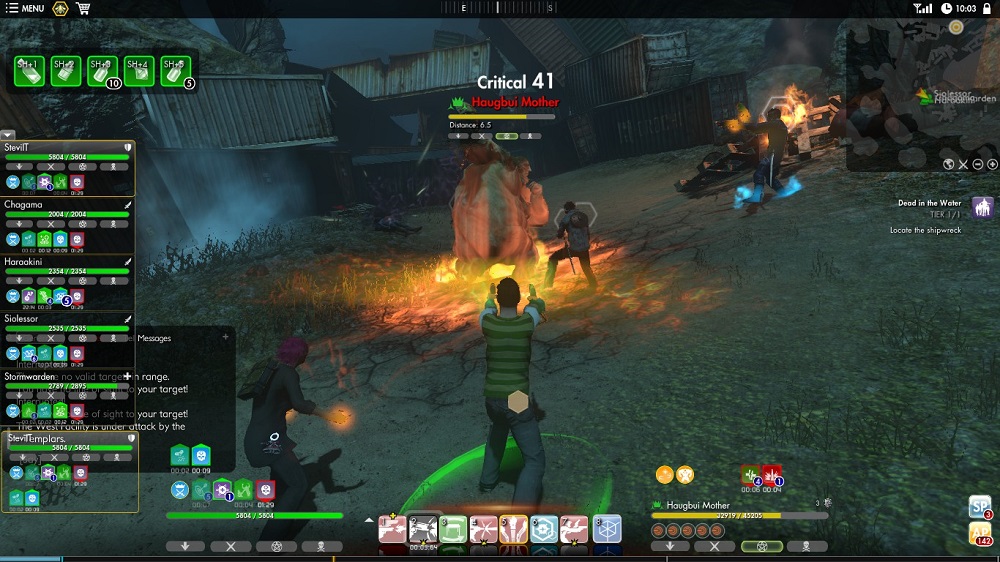 None of this would be so bad if it wasn’t for my faux-pa beforehand. After cutting down several mini-bosses like they were low-level minions, my group stopped at the glowing edge of another arena. Some kind of Super Draug wandered around in a haze, nothing I hadn’t seen before, but in the raiding world, reskins were deceptive.

“Who’s our defence?” asked our de-facto leader, ol’ Rutger Constantine. Whoever it was, they were going to be the one to shield our best attackers from crippling damage.

There was a long pause, filled with twiddling thumbs and idle animations. I’d like to think I’m a well-read person, but I couldn’t figure out why all eyes were on me.

Then the penny dropped, louder than the crashing waves against a battered shipwreck. I had been chosen, not because a slot was free and the raid needed five people to start, not because I had high-quality equipment or 5K HP, but because I blindly ticked all the coloured boxes and never thought about the consequences. Basically, the host chooses you on based on roles and I’d signed up for anything. 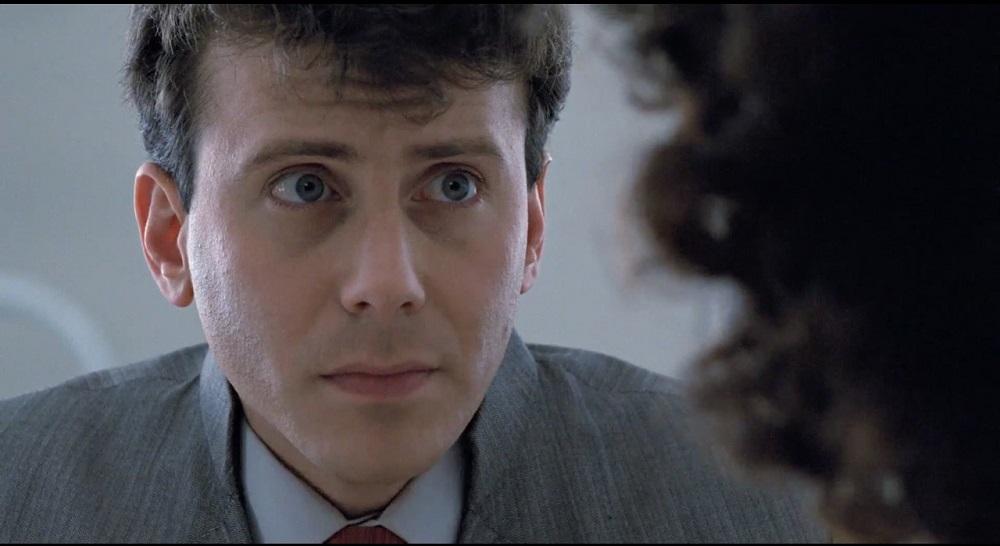 Now, there are many excuses I could’ve conjured up here. I could’ve told the truth, written a detailed apology and explanation for ending up in their raid, only it would take too long. I could’ve saved face and said something so slippery that I’d have to change my name to Carter J. Burke. But I’m a man of brevity. The best writing advice I ever heard was from my novelist friend (terrible shill, buy her book): kill your darlings. With the awkward seconds ticking away, my fingers hovered over the keyboard. It had to be quick, perfectly reasonable.

Oops? OOPS? What the hell was that? “Oops” is when you knock over another pint of milk in Starbucks. “Oops” is when you bump into your girlfriend coming out of the bathroom, when you’re both late for work. “Oops” is for the little things, when we’re all friends and there’s no point in being formal, especially if it happens repeatedly. “Oops” is when you want to gain sympathy by looking clumsy.

There was no reply, no sympathy, just stunned silence.

There was a little bit more, probably talk of re-jigging his menus, but it was white noise under all that exasperation. Any other game, I would’ve been kicked on the spot. Here, thankfully, they let me tag along (no real penalty for death), allowing me to complete the raid. Despite being greenest of the green, I was quick to adapt, even quicker if it meant staying alive. I hoped they’d notice that.

The giant lion-octopus Lord loomed out from the bottom of the cargo hold, fighting back with all its might as five strangers used every trick they had to bury him beneath the ocean floor. It was no match for humanity, despite their differences in ideology, however. The chopper came in, ready for evac. In the victory cutscene, Undead Danny Trejo looked square at me. From his perspective, he probably saw some embarrassing dweeb in a natty tank top. 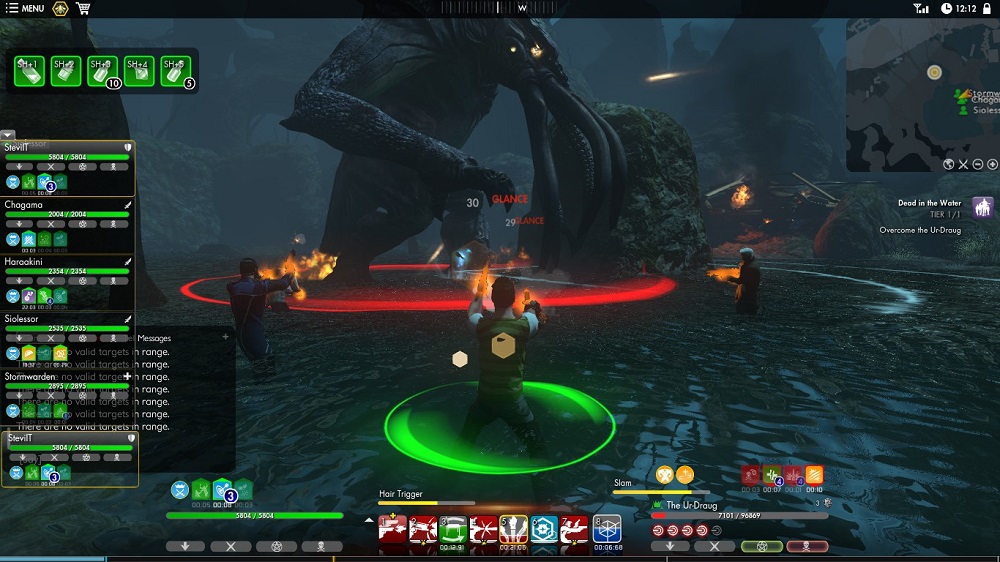 But it wasn’t over, that much was certain with Not-Cthulhu flapping its wings in the background. The helicopter crashed and we were forced into a deadly game of squid-and-mouse, hiding behind rocky pillars, throwing buffs at each other and hoping my pissing drone helped. It might’ve grown more powerful through trans-dimensional warps and stalked us through glowing mists, though like the beasts before it, Not-Cthulhu wasn’t long for this world.

With the second chopper in sight, the raid was complete. Four of us were heroes, while one was just thankful enough to bask in their reflected glory. It didn’t matter. I adapted, survived, and beat my first ever raid. I knew I’d get better at it, too. Standing back in the miserable surroundings of Kingsmouth, both my feet were firmly planted in the MMORPG world.

Too bad I was meant to be in Egypt.