Last week, I was given a tour of the National Videogame Arcade in Nottingham, England by the Director, Iain Simons.

Going in, I wasn’t entirely sure what to expect. I knew it wasn’t your bog-standard arcade with Time Crisis, Dance Dance Revolution, but I also wasn’t entirely sure if it was closer to a museum either. Since it opened in March 2015, I’ve heard plenty of things about events hosted there – Minecraft weekends, Gamejams, developer meetup evenings and the like, but never really about what’s there on a more permanent basis.

But now I’ve been, I can explain it pretty simply: it’s not about games in the same way a convention like PAX or E3 is. If anything, the NVA is much more about the medium rather than the end product, a centre about the creation of games and the underlying ideas behind games than any other games-related place I’ve ever been.

For a building all about video games, there’s none of the pomp and flash that comes with your normal conventions – no mention of big publishers or upcoming games, the entire affair feels very non-commercial which is a nice change to the normal games-related places I find myself in, and that helps go a way to make gaming more accessible for people who may not be involved in the scene.

Instead, many of the games on display are independent, or even built out of wood and paint to be exclusively shown at the NVA. There’s very much a DIY-feel to the place, and according to Iain that’s intentional.

There is an emphasis on ensuring guests understand nothing simply magically appears, but instead has effort and work put into it. For example, there is a game where players must try and hit buttons on a wall to match up items on a screen. The entire thing was built and painted on-site, and is intentionally imperfect to show the work that went into building it. 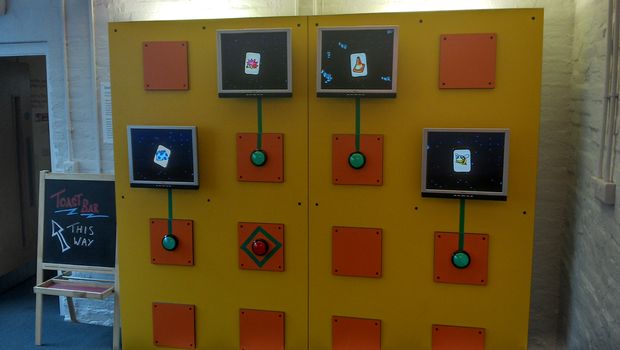 This DIY approach doesn’t only apply to the building, but also to the games on display.Mission Command, a game made exclusively for the Arcade, takes up an entire room. Under the guidance of an NVA staff member, the room spreads out the different parts of game development into different stations, where all the changes made can be seen in real-time on the screen.

Set out like a two-playerAsteroids, while one person is piloting the ship, another may be designing the ship in real-time using a grid of pixel-like lights off to the side. Behind them, someone might be drawing on a whiteboard an enemy which will then appear on the screen as well. When the room is full, the game being played is practically entirely built by those in the room at that time, and works to teach visitors all about animations, enemy design, physics, and control schemes in a simple way free of techno-babble.

According to Iain, the room can become incredibly hectic when full (the arcade was closed on the day I visited, and so was empty), but it still seems like an excellent way to put game development into practice without bogging people down with coding and engines and the usual barriers to entry. 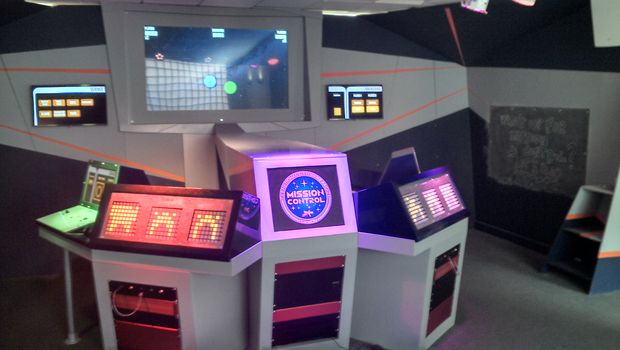 Tucked away behindMission Commandwas a small, messy room. With toys, skipping ropes, and lots of little plastic bits and bobs strewn across the floor,Room Racersis another example of the NVA’s emphasis on showing the basics of game development in an accessible way. Made to teach people about level design, the aim is to place toys and objects onto the floor to shape a racing track for those playing the game. Put a skipping rope on the ground, and cars projected on the floor won’t be able to drive through them. Smash the car with a tennis racket and they’ll be trapped underneath it.

To do it,Room Racershas a PlayStation 3 Eye mounted on the ceiling and maps out the stage using the contrast of the toys on the white surface. Sometimes it doesn’t go entirely according to plan, with glitches and bugs inevitable, but that is apparently just part of the process at the NVA. Should a game or piece of hardware break, Iain said it’s not uncommon for NVA staff members to try and fix it on-site for guests to see just how it’s done and yet again show games aren’t these perfect, randomly occurring things, but instead are made by normal people. 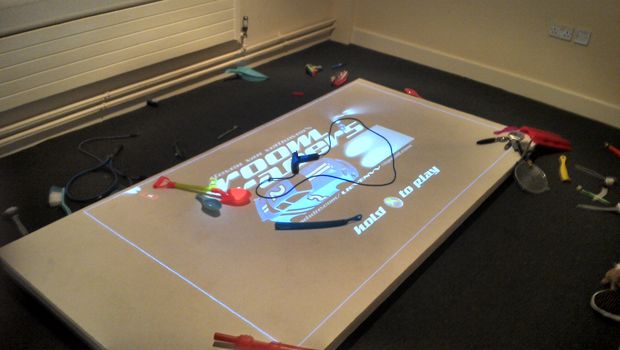 The next floor up was something a bit different: the Arcade’s first exhibition, Jump!. The Jump! exhibition was made explicitly to introduce one of the most basic concepts from games in great detail to those who have little experience with them – jumping. The entrance to the exhibition is a wall of screens, each showing characters, such as Mario, Sonic, and aSpelunkycharacter, jumping to explain how different games animate them differently. 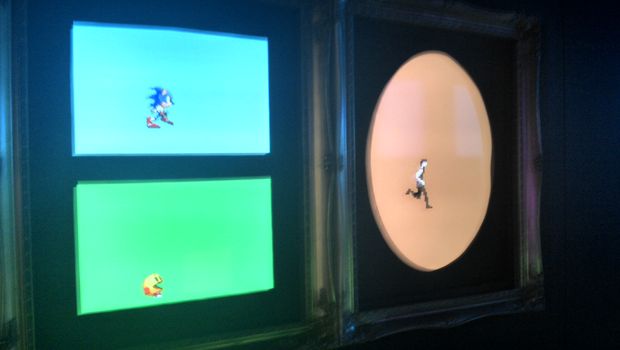 Inside, there were lots of different playable games revolved around jumping such asCanabalt, but the game I got to play was a small chest of drawers called the Jump-o-Tron. By turning knobs and pushing buttons, I could program a character’s entire jump pattern from the strength to the angle, before sending them on their journey through the sky.

According to Iain, Jump-o-Tron is a particularly popular part of the exhibition, with lots of people spending quite some time just watching their jumper fly through the sky. Once they’ve finally hit the ground, a receipt is printed out from the machine with information all about the jump as a small souvenir. 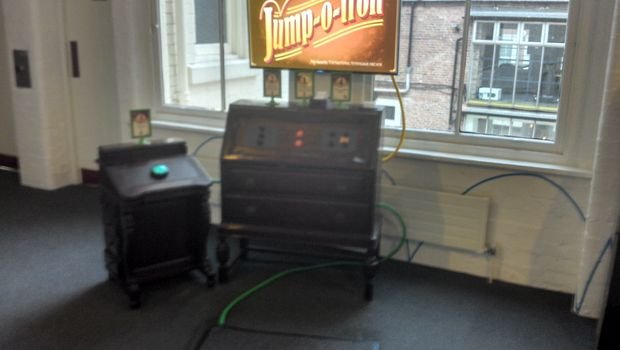 Also in the Jump! exhibition was a large wall covered in screens, each showing a different type of jump in action: Double-jumps, wall jumping, single jumps and more are all lined up to show people no two jumps are ever the exact same.

Next to it, levels fromSonicandMarioare able to be explored without the pressure of actually playing the game and potentially failing, allowing people to see how the theory guests had just learned applies to real games. It was a really cool way of getting guests to think about some of the more abstract elements of level design after going through games likeRoom Raceron the previous floor.

By showing this behind-the-scenes view of gaming without the barrier to entry we as a gaming community so often forget does exist, Iain hopes the NVA will be able to inspire kids to become game developers. He mentioned how if a kid is interested in football or dance, there are clubs that parents can sign them up to, but for game development there isn’t anything like that.

The NVA seems to be about showing people gaming isn’t just being sat in a dark bedroom hammering away at a keyboard, but instead aims to bring the positives and the social aspects of gaming culture to the forefront. The NVA serves as a springboard to convince parents and the general public that there is an actual industry and careers available in making games.

Despite all this, there is still something to be appreciated about seeing a hobby you’ve poured years of your life into laid out so simply. Even though I know full well what a jump is, or how a level is designed, seeing it all put so clearly and interactively still made me think about games in a way I’ve never really done before. So when I say the NVA does aim some of its stuff towards non-gaming guests, don’t take that to mean it’snotfor people who like games. It provides a new perspective on the medium, which is really important. 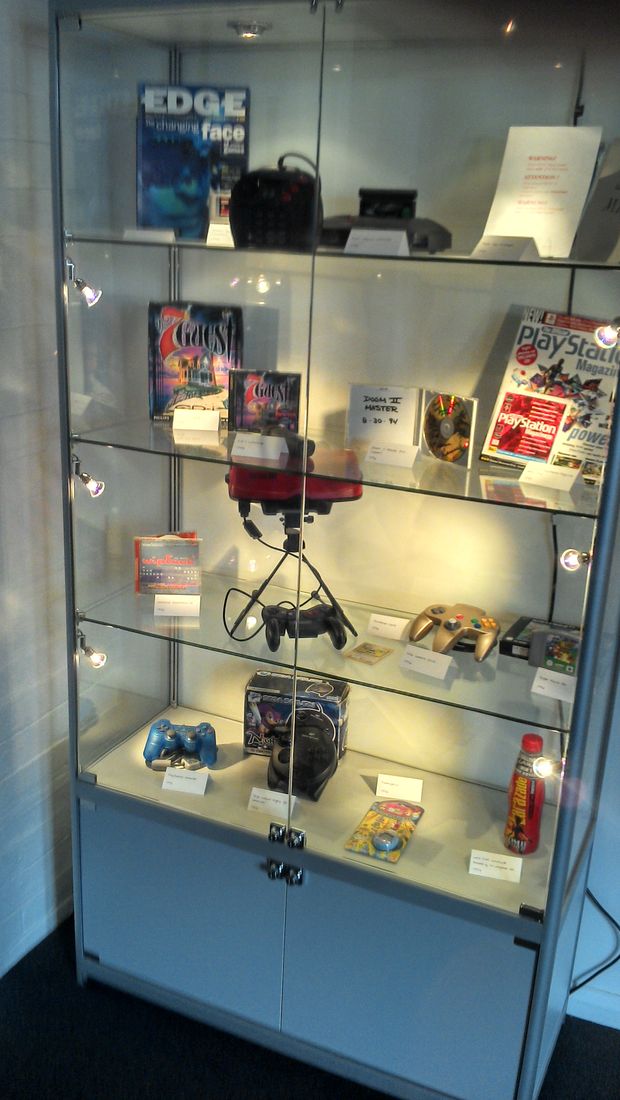 Of course, thereisstuff that seems like it’s for a more dedicated gaming audience too. Up on the third floor is an exhibition called “A History of Videogames in 100 Objects”. Lining the walls of the room are a series of glass cabinets filled with memorabilia and oddities from gaming’s short history. Sega Saturns, test builds of the PlayStation 2, and even Hideo Kojima’s old Konami business card can all be seen. I have to admit I did spend a fair amount of time geeking out in that room.

Iain explained to me it isn’t the 100 most important bits of gaming history, but is instead trying to show a more complete and widespread view of the medium and the culture surrounding it. Many of the items have been donated by guests and locals, and so it’s one of the most changeable rooms in the arcade – each time, there may be some new items on display. It’s also a really nice way of introducing the history of games to the same people who were just taught what a jump is one floor below. Iain told me that this room is one of the most popular, particularly among adult guests who can spend a long time looking over all of the many different bits and bobs. 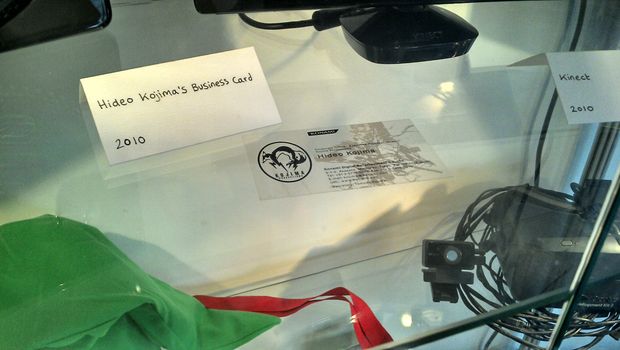 Also on the third floor is a room full of different controllers and peripherals from gaming’s history, all usable. There’sDonkey Kongabongos,Steel Battalionin all its intimidating glory, and of course my old friend theStreet Fighterarcade stick. It’s meant to be a way to show guests the many ways they can interact with games, but it also doubles as an extra room to nerd out over for those into gaming. 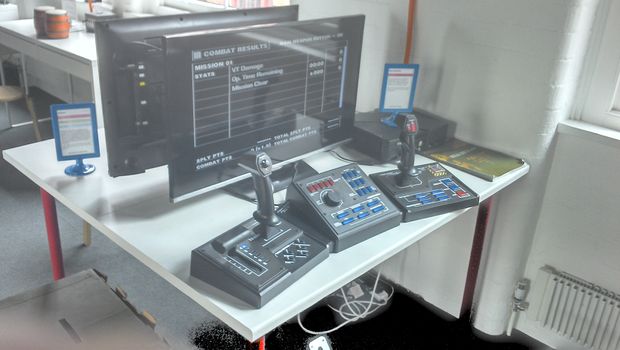 All in all, I had a really great time at the NVA. While a lot of the arcade is aimed more towards people who have little experience with games, it was absolutely brilliant being able to just enjoy and be impressed by games as a medium without the hype, the advertising, and the pomp that comes with your more standard game conventions.

It’s a place that felt really optimistic about games. It wants to inspire people to be creative and get involved in the scene, run by people who are clearly knowledgeable about games too:Minecraftweekends andFIFAtournaments take place there, as well as indie developers coming to show their games in a Toast Bar, all in an environment which is accessible to “outsiders” really makes the National Videogame Arcade feel like a cultural hub for games rather than your standard arcade.

They’re planning on altering and adding to the venue the coming months and years, but for the few months it’s been open, I was really impressed by what I saw. If you’re interested in visiting the National Videogame Arcade, please visittheir website.

Take your Gran and watch her totally wreck you on aNidhoggarcade cabinet.