Fighting games are about more than competition. At their best, they are about taking the most simple of design concepts (be better at hitting someone than they are at hitting you) and using game theory magic to somehow evoke years of replayability and depth.

For decades, fighting game strategy guides didn’t even come close to doing justice to the games they covered. No matter how insightful and knowledgeable the writers of those guides were, the limits of print excluded them from doing too much more than giving out some basic strategy, combos, and overview of how the game’s system works.

With few exceptions, Brady Games’Ultra Street Fighter IV Official Bible does all that and more. 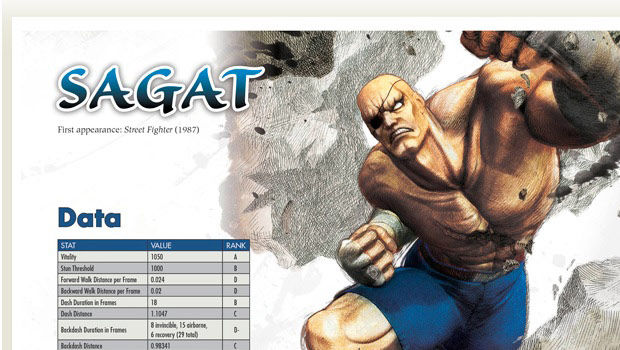 Unlike most regular Bibles, the USF4 Bible starts with a 37 page, small print glossary that explains just about every word in the specialized language of Street Fighter 4 players, from slang terms like “Shenanigans” to official jargon like “Soft Knockdown”. Derogatory slurs like “Scrub” are oddly absent. My guess is the writers of the guide are more than familiar with the uglier side of the FGC-bonics, but chose to omit those words as they are generally used to be a jerk and not to better understand the game. While I would have loved to read an official definition of a scrub (mostly to see if I really do fit the bill), it’s still good form for them to err on the side of positivity.

The glossary also contains stats on every characters’ Walk, Sash, Backdash, Jump, Vitality Bar, and Stun threshold. This sort of attention to detail carries over into the character specific info. Damage, frame data, hitbox location, and just about every other bit of minutia you could ask for on every move of every character is fully displayed through text and visual diagrams. On top of that, Throws, Focus Attacks, Basic Combos, Special Attacks, EX’s, Supers, and Ultras get extra detailed. strategy focused explanations. You’ll be 8 pages in on most characters before you’ve fully reviewed the basics.

From there the Bible gets into how one should think when approaching each character; which Ultra to choose, general pros and cons of each fighter, best/worst match-ups, the long range, mid-range, short range and wake up strategies. It’s very dense, but never repetitive. If you’re new to the game and it’s terminology, you’ll be referencing the glossary on a regular basis. It also makes for fascinating reading, for both the competitive player and for those who are just suckers for pondering game design.

Each character section finishes off with a detailed list of big damage combos that would do Skillz MacGregor proud. Best uses and specifics on the timing/structure of each combo is not surprisingly explained in great detail. If you were disappointed that the new characters in Ultra aren’t accessible in USF4‘s challenge mode, fire up training mode and try taking these combos on instead. They’ll be more than enough to keep you busy. 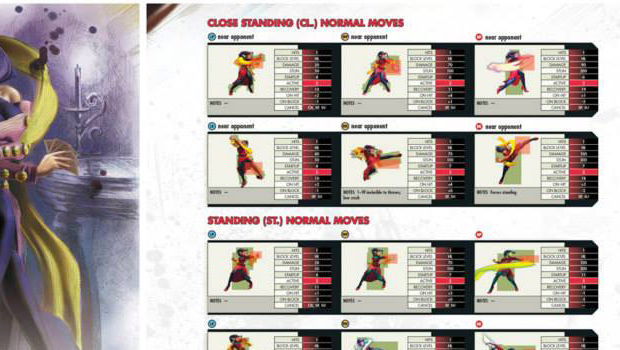 So what’s missing from the book? Not a lot, but I was surprised to see no tier rankings anywhere in the tome’s 6-8 pages. I understand why. This book is just about the facts, and tiers aren’t facts. They are subject to change as players-to-game dynamics evolve over time and new things are discovered about match-ups and techniques. Still, a loose “Our theory on who’s best in Ultra Street Fighter IV” chart would have been appreciated. Also, second opinions on all of the overview of each character would have been nice. There are a lot of different ways to approach each member of USF4‘s roster. While you’re not likely to ever find someone who thinks Zangief is best played at long range, it still would have been nice to get an alternate perspective.

The only other complaint I have is that there’s no mention of which version of each character is “better”. Most veterans agree that its easier to win with Vanilla Sagat than SSF4 Sagat, but that sort of opinion is largely missing here. That said, there is an extremely detailed description for each fighter’s changes from game to game, so it’s not too hard to figure out for yourself which iteration of what character is most effective.

It’s also worth noting that the USF4 Bible is NOT an art book. Not even close. Most strategy guides of old used to dedicate at least a few pages to promotional or production art, but there’s not room in the USF4 Bible for that kind of thing, even at 608 pages. Each character profile page contains said character’s primary art, and each page that follows shows off their character select art on the side. If an art book is what you’re looking for, you’ll have to head over to Udon (which is probably a good idea anyway).

Just as real life religious texts are meant to work in tandem with the experience of living day to day life, Ultra Street Fighter IV and its Bible were meant to compliment each other in ways that form a whole that is larger than the sum of its parts. Though you could technically spend just as much time digging into this book as you could the game (it took me quite a few hours to fully ingest and process it’s full contents), that wouldn’t wouldn’t do either justice. Regardless of how you enjoy it, this is still the most detailed and deep strategy guide for a fighting game I’ve read yet. Lets hope Smash Bros. gets the same treatment someday.