Bringing Terry Pratchett and Neil Gaiman’s novel Good Omens to the screen was a saga far too long. Multiple attempts to make the fantasy-comedy story into a movie had failed, and it was then decided to turn it into a television show instead. No writers would take on the task, as the material was “too big and too weird,” and per one of Pratchett’s final requests before his death, Gaiman himself wrote the television show, he told panel attendees at New York Comic-Con.

Along with Gaiman at the Whoopi Goldberg-hosted panel was director Douglas Mackinnon (Doctor Who, Outlander) and cast members Michael Sheen, David Tennant, Miranda Richardson, and Jon Hamm. What resulted from this combination of people were moments of hilarity, with the occasional beat of profoundness and inspiration. 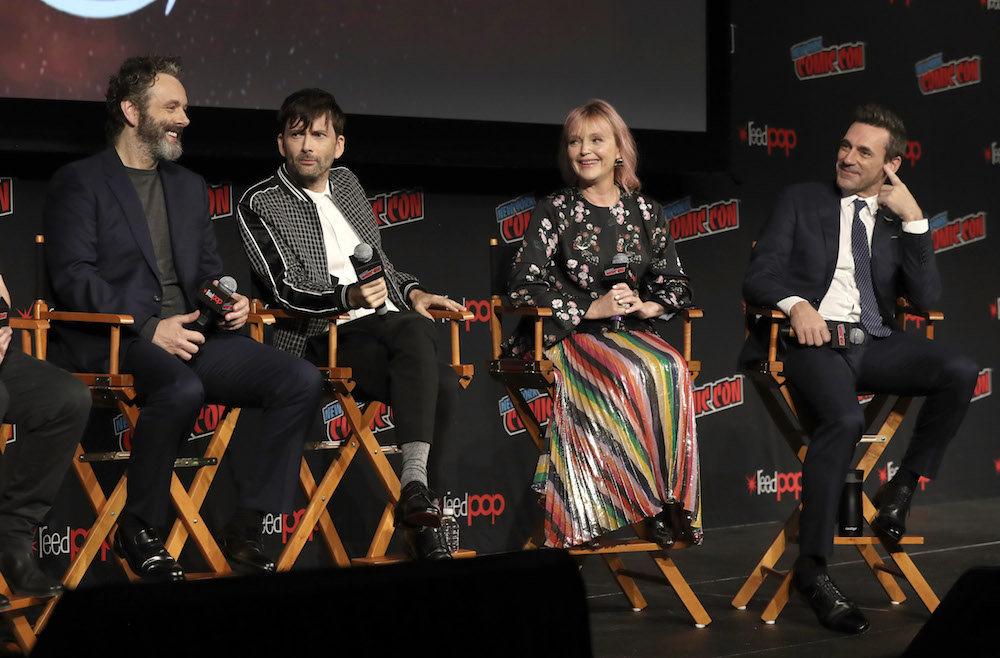 Sheen (Aziraphale) and Hamm (Archangel Gabriel) both came to the project already admirers of Gaiman’s work, with the two actors citing the Sandman comics and the American Gods novel, respectively. Also, “I did this for the money,” Hamm joked. Tennant (Crowley) and Richardson (Madame Tracy) on the other hand, jumped aboard onto the series through the sheer strength of the television script alone, with little to no knowledge of the book it was based on. “This is delicious,” Tennant recalled himself saying about the script. “And I get to be a ginger.”

The first clip that the panel showed off had Aziraphale and Crowley exit theirBently car, Crowly chastising Aziraphale for his music tastes. The music of Queen was prominently discussed during the panel, even and especially during the pre-show when audience members were encouraged to sing along to “Bohemian Rhapsody.” Gaiman tells the attendees that the idea came from a real-life theory/joke that any tape cassette left in a car would turn into a Greatest Hits of Queen compilation, the concept eventually making its way into the novel. 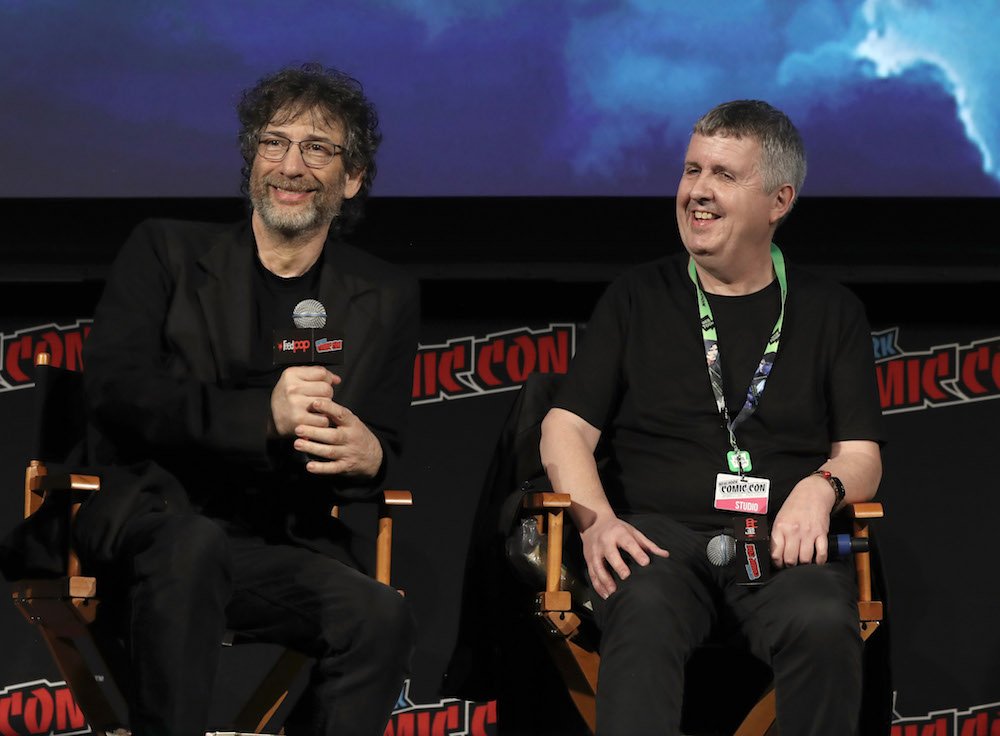 The concept of good and evil was also heavily featured in the panel discussion—as Goldberg said during the panel, good and evil can live in the same person. People are not fundamentally good or evil, the panel participants said—rather, they are fundamentally human.Crowley is a demon who likes people, and Aziraphale is a “bastard worth knowing,” the performers characterized them as. Good can’t exist without evil, and Mackinnon described Sheen and Tennant as almost “merging” into one person during filming. Collaborating with Tennant was like a dance, Sheen described. “It was very sexy,” Tennant added.

Jon Hamm’s Gabriel character was characterized as an “annoying boss.” Hamm elaborated, saying that this character was always so certain of his correctness, but was “always wrong.” This personality trait is something that reflected our current society,Hamm said with a very obvious inflection that had political implications. The second clip that was shown heavily featured Hamm as Gabriel, in a whimsical scene inAziraphale’s bookstore that felt like a more adult version of A Series of Unfortunate Events. 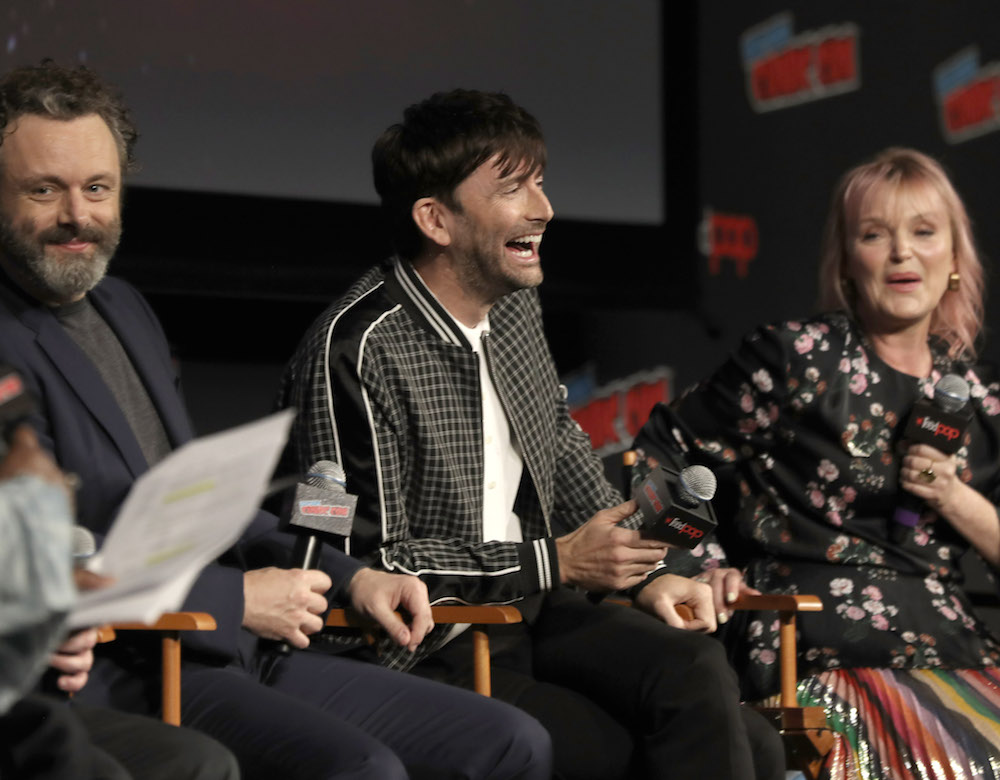 When it came time for the Q&A portion, it was obvious that many of the attendees in this absolutely-packed theater were Neil Gaiman fans. When asked what the greatest challenge of adapting from page to screen was, Mackinnon and Gaiman said that it was the pure scale of the book; there were roughly 250 speaking parts, hundreds of locations, so many CGI shots, and a story that “just kept going.” One fan asked if the book’s footnotes would be incorporated into the television show, with Gaiman and Mackinnon stating that they would be, more or less; some of the footnotes would be dramatized, with others being referenced to more subtly.

The television series was somewhat modern but with elements like the Bently, anachronistic and nostalgic props were included front and center. Finally, a creative writing teacher asked Gaiman what she should tell her students who are trying to find their voice. Gaiman said that his advice was to not try to find your voice: “just write a lot,” and your voice will eventually come out of that from all of your work.

The panel ended with the world premiere of the first trailer, which you can see here. Good Omens will come to Amazon Prime Video in 2019. 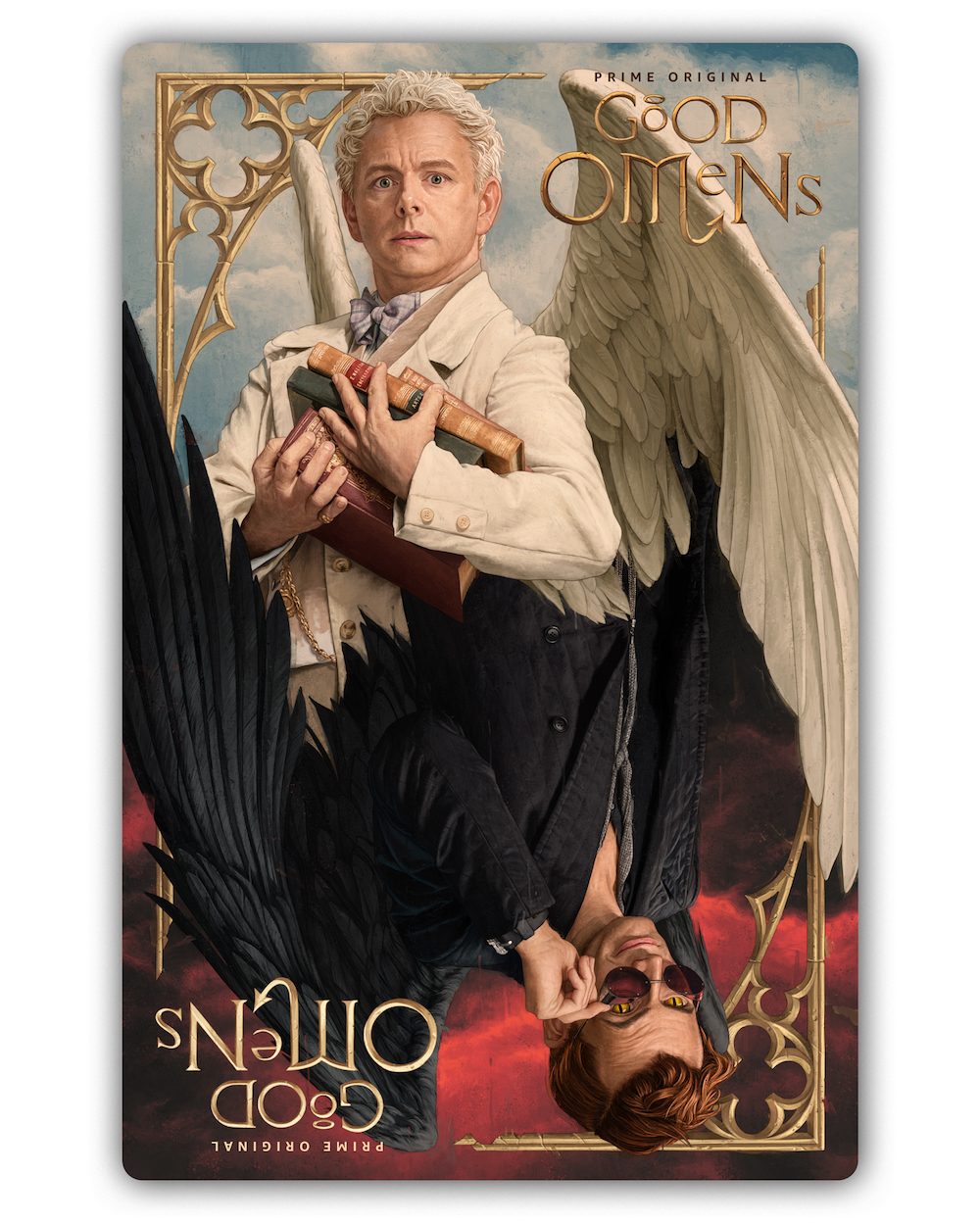