You know how indie games always seem like they have to have some sort of hook – something unique to make them stick out from all the other games? Well, that’s what Visiontrick, a two-man development team, has with Pavilion. Honestly, it’s kind of a lame term to get recognized. Luckily, their game is cool without any sort of shtick.

Pavilion’s thing is that it’s presented from a “fourth-person” point of view. What they mean by this is that you control a gold, streaky cursor that can interact with the environment and clear the path for the game’s protagonist. It doesn’t exactly live up to its billing as a new viewpoint, but it makes for an interesting and refreshing mechanic.

The game starts easily enough, as you basically just ring some bells to move the mystery man along a path. It’s simple enough to make you wonder how far the difficulty can actually ramp up. Ring a bell, force him toward a chest, grab a key, send him toward a locked door. It seems like child’s play for a bit. 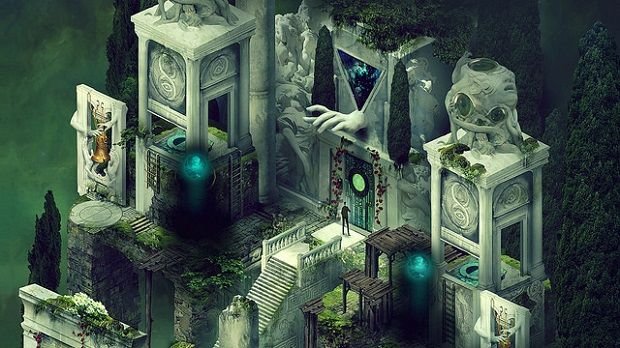 However, it doesn’t take long before you’re using your critical thinking skills. The puzzles get complicated fast, and it becomes a game of trial and error to figure out exactly what will work and what won’t. Every action thrusts the little man in a different direction; it’s just up to you to figure out the order and the timing. It’s the type of situation where you’ll solve each part of the puzzle one at a time before finally putting it all together for one successful run.

From the demo I saw, you wouldn’t think there’s any rhyme or reason to the actions on screen. This isn’t true, though. The developers revealed that there’s a story that’s unveiled throughout gameplay, but they refused to divulge any details as to what it was about. I guess we’ll just have to wait on that aspect of Pavilion.

Fortunately, the gameplay seems like it’ll be enough to warrant playing Pavilion. Scheduled for a summer 2014 release on PS4 and PS Vita, it’s looking like another potentially fine title among Sony’s ever-growing stable of indie games.