…Wait, what? Things are getting weird

Xbox One exclusive Quantum Break didn’t have much to show at the Xbox One announcement event beyond vague trailer featuring rapid fire quick cuts, but after a presentation by Remedy’s creative director Sam Lake and head of franchise development Oskari Häkkinen, I have both more of an idea and less of an idea about what Quantum Break actually is.

The game is structured episodically and split between gameplay “episodes” and episodes of a live-action show, designed to meet the “Xbox One’s vision” of “fus[ing] television and gaming.”

Welp, here we go. More after the break. 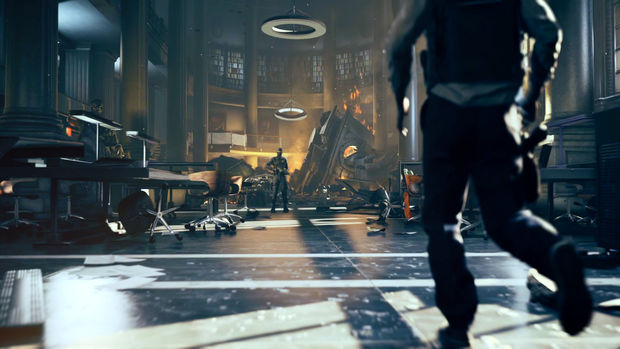 The theme of Quantum Break is time. A crazy experimental accident is causing time to break down, causing soft spots of temporal dysfunction to screw with the world. The game’s two protagonists Jake Joyce and Beth Wilder, were present during the accidental, and have gained special powers that render them, among other things, immune to time screw ups. The game’s antagonist, naturally, was also present, and was granted with even greater powers.

The basic premise reminds me a bit of the squandered sci-fi show Fringe (it’s not great), while the botched experiment reminds me of the Fantastic Four. Lake said “a great game is a melting pot of pop culture,” and it shows here.

I’m not sold on the TV show aspect. We were showed a glimpse of the live-action acting featuring vaguely recognizable (probably television) actors hinting at some of the game’s central intrigue. The lighting was overblown and yellow in the diner, looking like something out of Deus Ex. The acting was wooden and obvious. It wasn’t terrible acting, but it was horribly noticeable that the characters were in fact acting (which, depending on your school of thought, might mean it is in fact terrible acting).

The male and female leads featured seemed to be delivering caricature, spouting off hokey, trite dialogue indiscernible from every single crappy network television cop drama or crime thriller I’ve ever seen. I really, really hope that’s not indicative of the full or final product.

After this, we were shown a small sliver of gameplay. After a scene where some sort of CEO’s swank pad is blown asunder, the game’s male lead and an accompanying agent show up on scene to an unstable, time-frozen explosion. The character walks forward, brushes some floating, broken junk out of his way, and then interacts with the woman, switching back to an in-engine cutscene.

Things look great, visually, but the live-action show has killed my interest in Quantum Break. At the end of the presentation we were shown brief gameplay stints cut together rapidly, but I still don’t know much about how the game plays outside of it being “an action-shooter,” though Remedy has planned to announce more gameplay specifics down the line. Still, unless I see more of those live-action segments that are less painfully mediocre and silly, I’m not sure I’ll be able to stomach the game.