You’ll have to do without OddJob though

Boy howdy, we’ve come a very, very long way since that infamously fantastical Rainbow Six Siege demo was first previewed at E3 2014. Since then, Ubisoft’s tactical shooter has certainly prospered, as a fairly blah launch has since evolved into one of the most enjoyed multiplayer titles in gaming. This weekend is a perfect example of this, as the best Siege players in the world compete at The Six Invitational tournament in Montreal, in front of an audience of thousands, with many more watching online.

Now entering its fifth year, Rainbow Six Siege is at an important crossroads. 12 months from now, we’ll have entered an entirely new generation of gaming, with consoles like the PS5 and the Xbox Series X vying for our attention and wallets. This generation will bring with it a host of new IPs and sequels, all eager to unleash the potential of the powerful new technology on offer.

Ubisoft, however, stated long ago that there are no plans for a Siege sequel. Instead, the development team are will work to simply transition the current game onto the new platforms, taking with it the operators, maps, weapons, gadgets and – hopefully – some 55 million registered players. This pivot to next gen begins now, in 2020, with Siege’s incoming content. So let’s look at what Years 5 & 6 have in store for Ash, Thermite, Mozzie, Caveira and the rest of the flashbang fanatics. 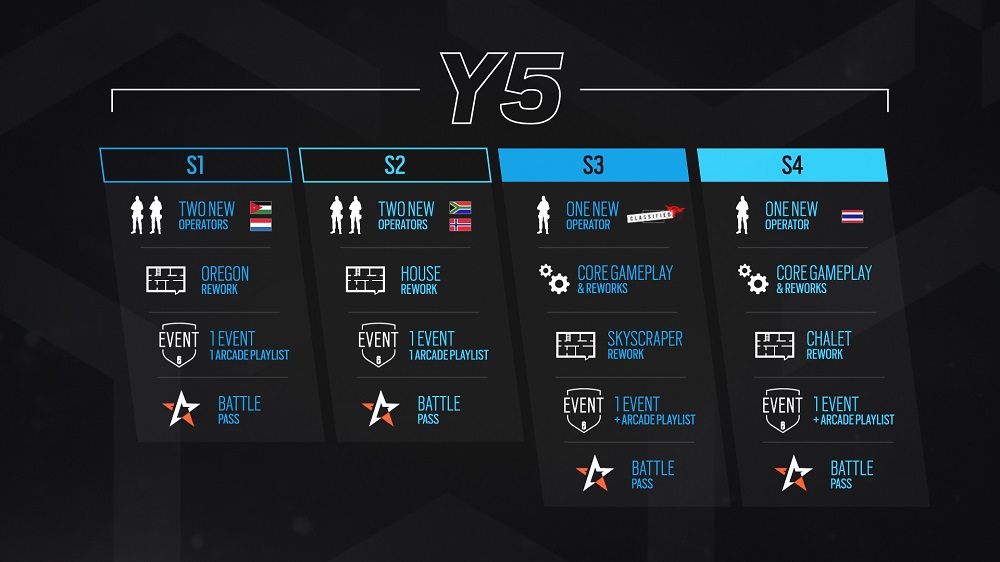 Year 5 begins with Season 1, the recently revealed Void Edge. This season adds operators Iana and Oryx, a rework of the Oregon map, and new mechanics concerning drone spawns and barricade destruction. Season 2 will see the arrival of two more operators, (hailing from South Africa and Norway) as well as a rework on one of Siege‘s wildest maps, House.

Now, moving forward, things get a little different. From Year 5 Season 3 through till the end of Year 6 (at least), Siege will only be adding ONE operator per season. The rest of development will focus on reworking existing operators and maps and – more importantly – refining the Siege experience at a base level.

A good example of this is the incoming redesign of Siege’s ping system. Instead of just dropping a yellow waypoint marker, Ping 2.0 will allow players to specifically identify items, hazards, and traps – for example highlighting a Kapkan trap, a Frost mat, a bomb, or the defuser itself. This will allow players not using voice chat to be a little more specific in their visual callouts. Another incoming feature is Map Picks/Bans, where teams will be able to select one of three maps for Ranked Matches. There are also a new run of secondary gadgets in the works, such as a motion-triggered alarm system. These are all examples of the content that will be peppering future seasons, in lieu of a second operator.

It should be noted that Map Reworks will continue. Season 3 will see Skyscraper get the facelift fans have been crying out for an age, while Season 4 will see tweaks to nobody’s favourite ski lodge, Chalet, thus rounding out the content for both Year 5 and 2020 in general. 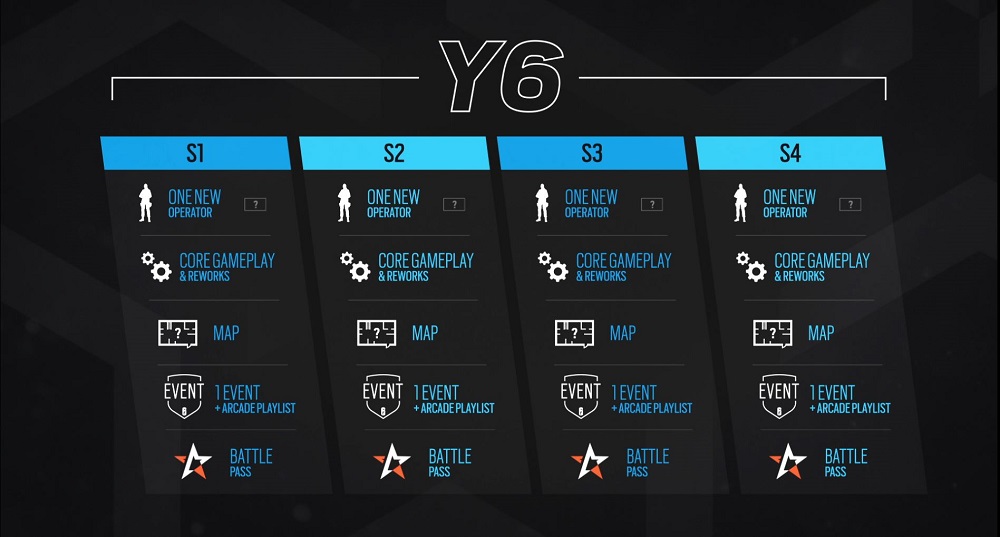 Year 6 begins in early 2021 and, as previously noted, will see just one operator arrive per season, along with numerous gameplay fixes, features, mechanical tweaks, and map reworks. Year 6 will also see a tighter focus on the Battle Pass system, which can be more or less translated as “more stuff to buy”. From an esports perspective, the pro-league will also be switching to a points-based system, similar to that used by many fighting game pro-leagues.

But that’s not all, as there are other exciting features that will be dropping in Siege over the course of the next two years. A full replay mode is on the way, allowing players to watch their matches back from any player’s POV, or via the cool overhead camera that is used during pro-league events. Void Edge will also see the debut of the new “Arcade Playlist”, featuring a rotation of fun limited-time modes. The first of these will be that staple of GoldenEye 007 multiplayer: Golden Gun.

That’s a lot of information to digest. But in summary, Ubisoft is planning on revamping Rainbow Six Siege over the course of the next two years. Each month will bring new arcade modes, mechanical fixes, reworks for both maps and operators, and even new secondary gadgets, the trade-off being that new operators will be limited to just one per season.

Personally speaking, it’s a price I’m more than willing to pay – Lord knows Siege has enough frikkin’ characters already. I think that ultimately it’s the little things that make me excited for the future of Siege; Better UI; fun side-modes; replay functions; Ping 2.0; drone spawn tweaks; cleaner barricade breaks; this is the stuff that’ll keep me playing Siege into 2021 and beyond, not more window-smashing maniacs.

Besides, I got my gurl N0kk. It’s not like I need anyone else anyway.

Rainbow Six Siege is available now on PS4, PC, and Xbox One.