Many years ago, as the struggles of college encased me in a constant state of anxiety, I would often daydream of leaving it all behind, throwing away my cell phone, and hitting the road in a VW bus. I found them parked along the streets of my college town, in all different colors, and each time I passed one while going for a walk it would lure me another inch towards that nomadic lifestyle, one free of all the worries and financial troubles of the modern day. I could feel the stress lifting off my shoulders every time I thought about it, but it was all just my imagination.

In reality, what I was doing was romanticizing poverty. The people who live out of their vans and venture across the country aren’t the soulful folk poets and sensitive writers I imagined them to be. As I read in Jessica Bruder’s Nomadland, many are struggling to get by, working odd jobs just to put food in their mouths and gas in their tank. Learning the realities of the nomad existence crushed my wayward dreams, but van life in Animal Crossing: Pocket Camp has those idealized impressions creeping into my mind once more. 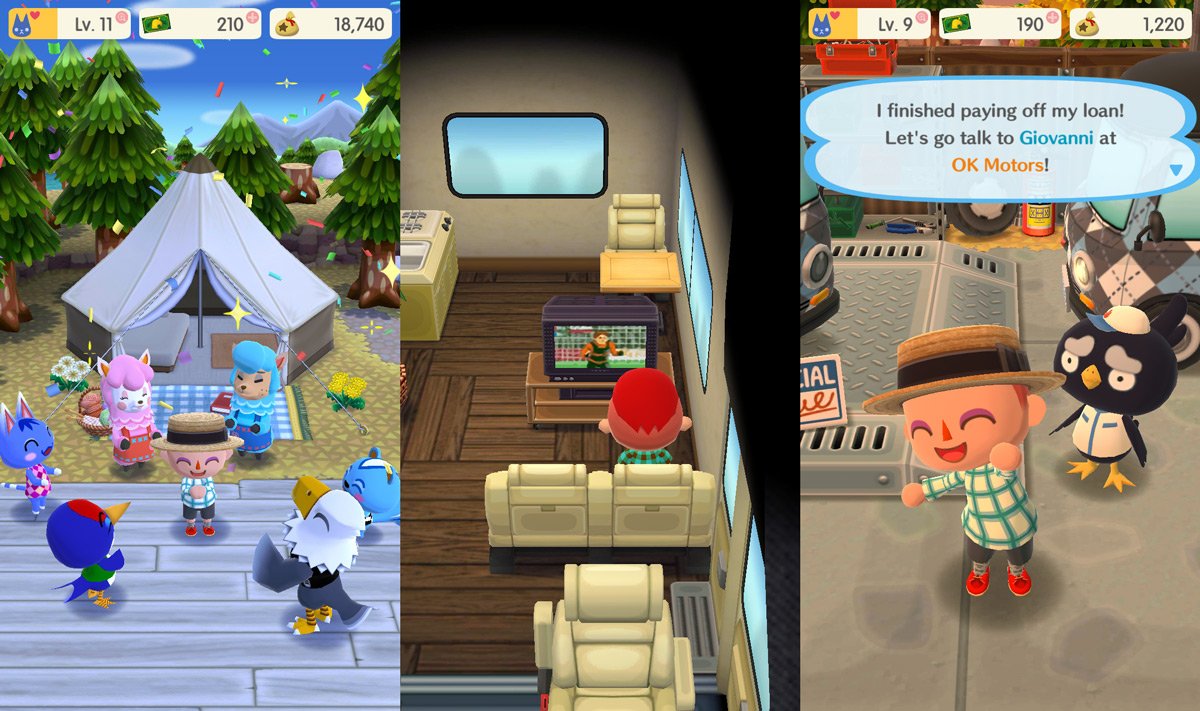 With Animal Crossing: Pocket Camp, Nintendo and DeNA take the classic Animal Crossing formula, cut it up and serve it back us slice by slice. Most of the important facets of the series are here, including fishing, decorating, bug catching, fruit collecting and shopping. Instead of doing all of these activities in one large town, I now travel from tiny location to tiny location to access them. Nothing looks that much different from a standard Animal Crossing game, it’s just now I have to deal with a short load screen when I want to move from task to task.

Right away let me say I am very happy how well this game runs on my phone. I have a mid-tier LG and I was skeptical about how the game would run. It is smooth with crisp, colorful graphics a shade better than what I find on my 3DS. Touch controls are responsive and second-nature by design. Like every other smartphone game Nintendo has put its name on, this looks, sounds, and controls exactly as you expect it to.

Much of the Animal Crossing experience is simplified. I no longer have to worry about carrying nets or fishing poles as they’re automatically equipped depending on where I am. Sneaking up on a bug requires no effort as long as I remember to tap when it prompts me. Fish in the game are so eager to be caught they make a b-line for the hook every time it’s cast, like I dipped it in pure Colombian cocaine before letting it fly. There’s no back and forth, no repositioning to make sure the river and sea creatures notice me. I can cast my line nearly anywhere and they come running.

Putting a series as beloved as this one on mobile could have been a disaster but I am pretty much on board with the direction taken here. Broken up the way it is, I willingly return to it, day after day, to fulfill character requests, visit the campsites of other players, complete the daily and stretch goals and check out the new threads, décor and camper coatings that rotate in with a new day. 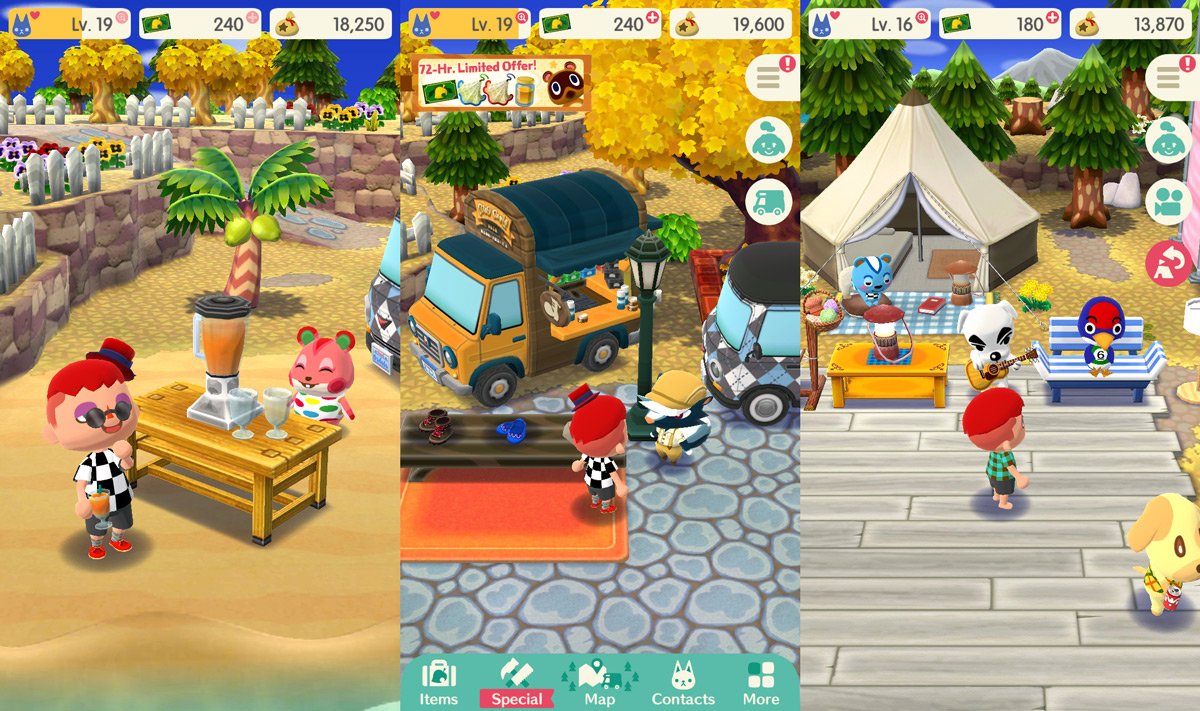 What I’m not on board with is some of the ways In-App Purchases are implemented. The economy of it feels off in version 0.9.0. Like the rent, Leaf Ticket costs are too damn high, flying out of my account faster than I can earn them. Nets to catch groups of fish and honey to catch bushels of bugs cost 15 tickets each use. It’s 20 tickets to visit Shovelstrike Quarry once, another 20 tickets to expand my inventory by five slots. I have to drop 80 tickets to gain the ability to craft two items at the same time. 150 tickets for some of the special camper paint job. 250 tickets for a damn Tom Nook chair! That’s not the mention the pressure I can be under to drop some tickets speeding up the crafting process.

The waiting game grows far too ridiculous too early in the game. Crafting chairs and sofas for my first five guests is a quick process with each item taking a minute to make. On the sixth character I try to invite to my campsite, not only does he require five items for me to craft before he’ll show up, but one of those items takes more than six hours to make and a second one requires five hours. Into my first day of playing, just two and a half hours or so under my belt, progress is already being put into timeout for half a day while Cyrus takes his sweet ass time putting together a speaker system and drum set.

It’s an absolute buzzkill of a maneuver. I know waiting is to be expected here. Amenities can take a few days to build if I don’t spend any Leaf Tickets. I just didn’t expect it would happen this fast. I thought it would ease me into it more gradually, allowing the game to strengthen its grip on my free time. Instead, as I stare at my phone knowing progress is hours away, my attention starts to slip.

A real saving grace for Pocket Camp is I’m rarely without something to do. Like classic Animal Crossing, when I’ve run all my errands and checked out the selection at the shops for the day, I can just fish, catch bugs and grab seashells to my heart’s content. These items are most likely needed to fulfill requests, so I can grow my friendship level with the denizens of this squatter’s paradise even if I can’t get them to visit my campsite.

After three days I’m at level 20. I’ve already hit the cap on the number of guests I can have at my campsite at once and have begun rotating them out. Right now, the essence of Animal Crossing is there, or at least enough of it that I still look at the app longingly, with the doe-eyed glare the series manages to educe from me. It’s still early in my new vagabond lifestyle and I can go either way with it. A lot of what I love about the franchise is here, but I’m not quite sold on its Free-to-Play restrictions. Expect a final review of Animal Crossing: Pocket Camp when it launches worldwide next month.