As we told you a few days ago, our reviews of Pokémon Swordand Pokémon Shieldare going to be a little bit late. We didn’t get our code until about 07:30 PST and it wasn’t until I got home from work that I was actually able to start it up. And once I did start it up, I didn’t stop. For nearly six straight hours I dove into the newest region of the Pokémonfranchise. I explored the Wild Area. I teamed up with strangers in Max Raid Battles. I ran from a swarm of angry Wingulls. And I’ve made some delicious curry.

Six hours is only a small dent in what is shaping up to be a sizable adventure, but it’s enough of a dent for me to acknowledge that I’m quite enjoying what Game Freak has cooked up here. 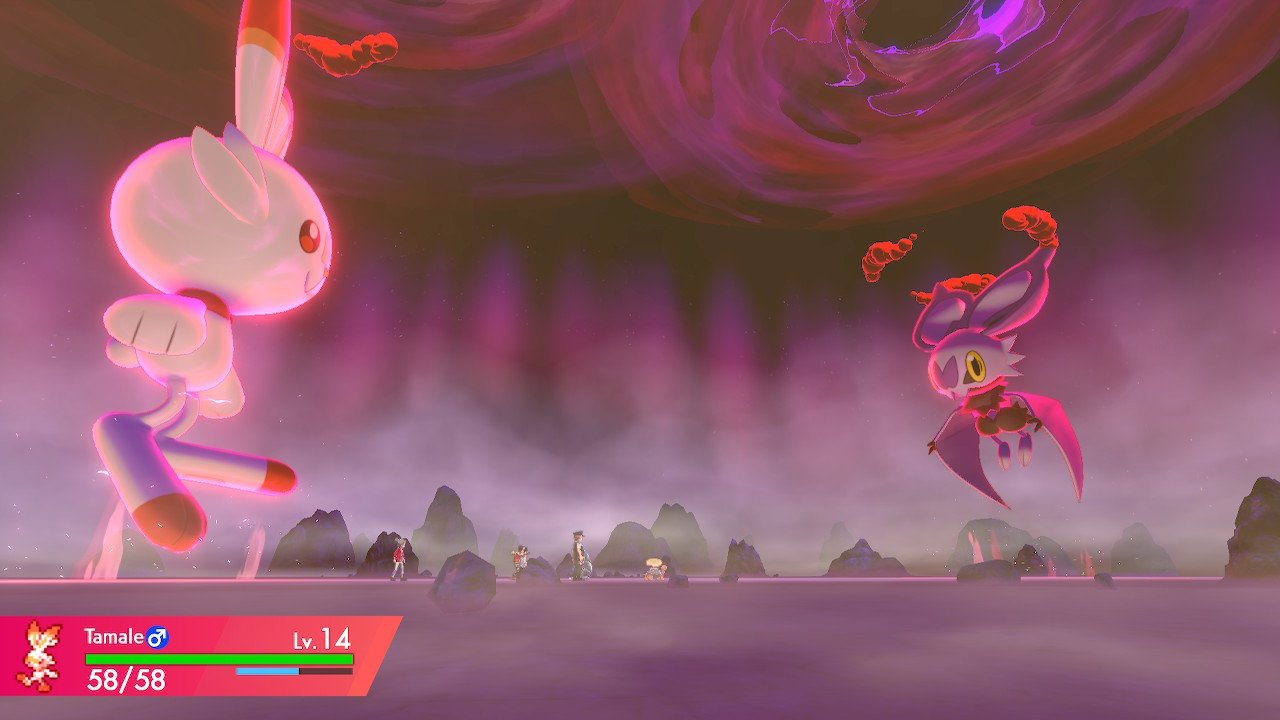 With rollings hills and rolling Wooloos, the Galar Region makes a beautiful first impression in the opening moments of Pokémon Sword. After a brief run-in with Zacian in the mysterious woods near my house, I slowly set off on my adventure with my BFF-cum-rival Hop, a boy from down the street who just happens to be brother to Leon, the champion of the region. It’s Leon who gives me my first Pokémon; I go with Scorbunny because everyone else I know with the game picked one of the other two.

After a quick trip to meet Professor Magnolia and her granddaughter Sonia, my rival and I set off for Motostoke for a really underwhelming opening ceremony to the Gym Challenge. We’re sidetracked, however, by some Wooloos on the train tracks, forcing us to venture into Sword’s big new addition to the Pokémonformula: the Wild Area.

Located just outside the gates of Motostoke, this sizable open-world environment is filled with plenty of tall grass, wild Pokémon, as well as other players, if you choose to connect to the internet. It’s also where you’ll find various dens that grant players Watts, a form of currency used in the Wild Area, or house Max Raid Battles with Dynamax pokémon. In these battles, you choose a single ‘mon from your team to join up with three other players to battle these massive beasts. If you don’t connect to the internet you’ll be joined by three A.I. controlled partners. The first few times I attempted one of these battles with other players yielded no responses, but after about two or three tries I was able to hook up with other real-life people.

When connected to the internet in the Wild Area, the land becomes far livelier with other players running about but not in ways that are always beneficial to the experience. The frame rate tends to stutter when there are too many characters on screen and other player avatars will appear and vanish with no rhyme or reason. It’s not the best look for an area that can be pretty barren. Hooking up with other players to do Max Raid Battles hasn’t always worked, as I’ve been hit with a “No communication partner was found” error on multiple occasions, but when it does work it’s a pretty neat set-up. One player will be allowed to Dynamax their Pokémon of choice while the others have to make do with their normal attacks. Type advantage still plays a major role here, so you can have the tiniest of Pokémon absolutely wipe the floor with one that’s three stories tall.

You can spend as much or as little time in the Wild Area as you want. I probably took a full hour exploring it, finding TMs, and expanding my Pokédex before moving onto Motostoke. After the opening ceremony and a quick introduction to trainers Marnie and Bede, as well as the sure-to-be-annoying Team Yell, I set off for the first stadium on my adventure. Turffield Stadium is home to Milo, the game’s requisite Grass-type gym leader, who doesn’t stand a chance against my team of fire- and flying-type Pokémon. After completing the gym challenge of herding Wooloos, I faced off against Milo and beat him in less than a minute. This dampened victory highlighted what so far has been the only sore spot of Pokémon Sword.

Simply put, this game is too easy. Six hours in and there hasn’t been a battle I’ve struggled with or a Pokémon I’ve failed to catch. I understand the idea of ramping up the challenge as players go along, but I feel like the difficulty should have started to push back just a bit by now. Scorbunny is far too powerful in these opening hours and with the Wild Area, it’s quite easy to become overpowered as the land is lush with wild Pokémon to battle, especially when you consider EXP Share is an automatic feature of the game and switching out party members is easier than ever before. Max Raid Battles also provide little challenge as I’m often paired up with one player who’s always able to one-shot our opponent. 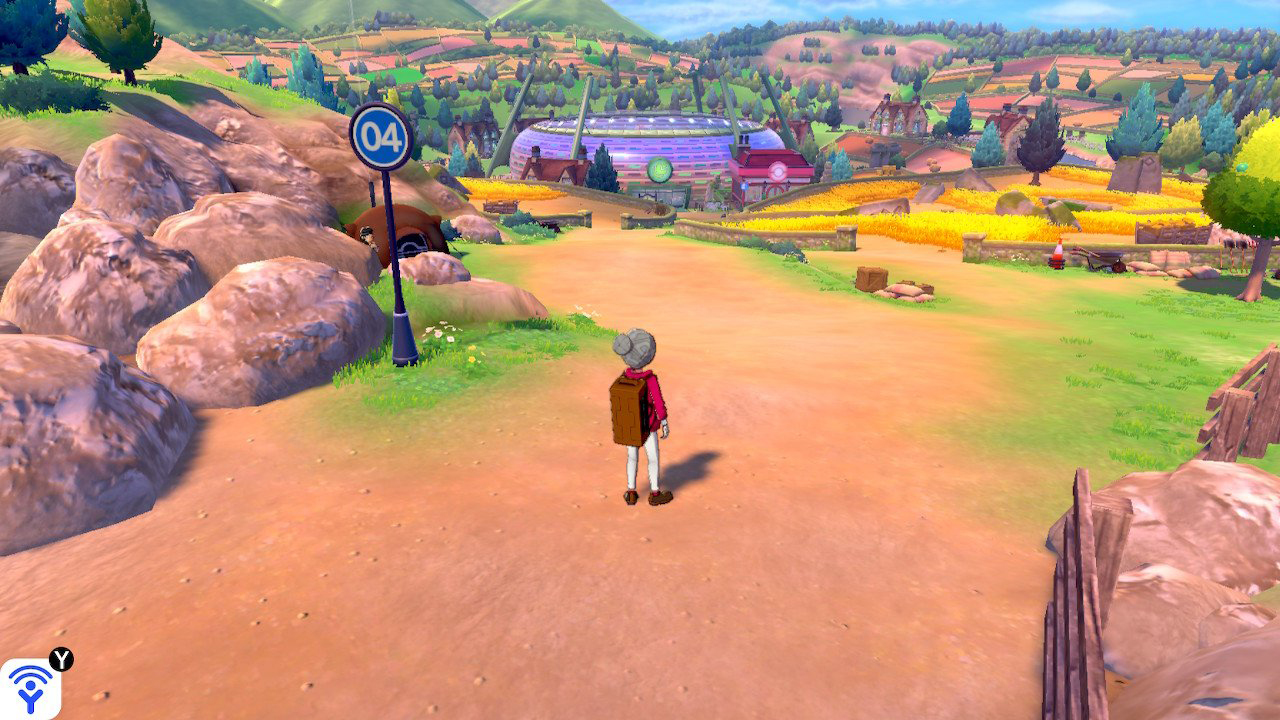 I can only hope the game starts to present more of a challenge as I venture further in the campaign, because other than the lack of difficulty, I’m quite enjoying my quest through the Galar Region. The art direction can be quite lovely, the design of the towns and cities is ornate, and many of the new Pokémon designs are outright adorable. My Scorbunny has just evolved into his angsty Raboot form and other members of my team feel as though they’re getting to a high enough level that an evolution is only moments away. While the various routes I’ve been on may not house as many wild Pokémon in the tall grass as the Let’s Gogames, the world is still well-populated with Pokémon, trainers, and plenty of small details cooked into the environments.

Now, I have read about some problems other players have had with the game crashing and potentially deleting files off their MicroSD card. I have not run into any issues with Pokémon Swordoutside of the aforementioned failure to connect with other players. It’s been a mostly smooth ride when docked or in handheld mode and I can only hope it remains so the further I travel into the Galar Region.

I know it’s early, butPokémon Swordhas sunk its hooks into me in ways the series hasn’t since Pokémon X. Sure, the central sub-plot is far simpler here than in past entries with its not-yet-interesting investigation of the mysterious Zacian, but the first six hours have done a great job of getting me invested in the idea of becoming the next Galar Region Champion.

[This review in progress is based on a retail copy of the game provided by the publisher.]