I am prepared, actually

I’ve been playing World of Warcraft for over 10 years. Sure my raiding days ended in earnest in Cataclysm, but I’ve kept up with every expansion since its beta phase in 2004, and have played every class in the game — and on occasion, serving as a class lead in several guilds. During that period of time, I saw most of my friends quit, and now, I wander the wasteland of Azeroth alone.

But that’s perfectly fine with me as WoWis still one of the best MMOs to date, even if many of its archaic elements have been surpassed by recent projects. Just when I think I’m out, they pull me back in again. 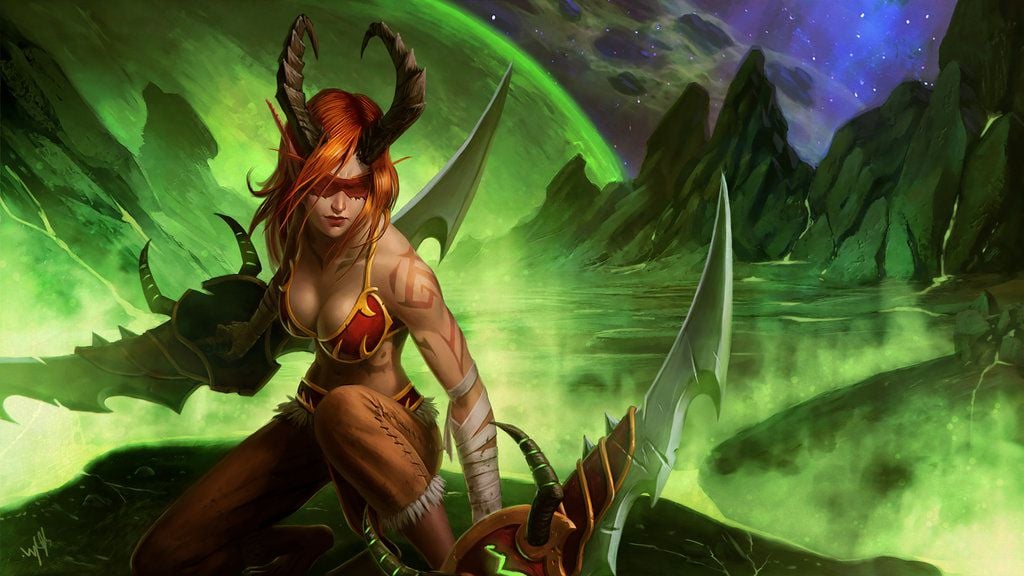 Similar to Nintendo’s strategy of appealing to nostalgia with the “Alola Forms” of classic Red & BluePokémon, so too is Blizzard aiming for your love for Warcraft. At the core of the conflict stands Gul’dan and Illidan, two mainstays that are now locked in combat with the looming threat of the Burning Legion in the background. And like the Death Knight hero class tied heavily into the story of Wrath of the Lich Kingand the subsequent wrapping up of Arthas’ tale, the addition of the Demon Hunter hero class (only the second hero class in over 10 years) is a perfect fit.

There’s a small catch if you’re keen to make one — you need a level 70 character on that server— and you need to own the Legionexpansion itself, and you’re in. Demon Hunters start at level 98, and by the end of the roughly three-hour-long questline, you’ll hit 100 (primed to start your climb to the new 110 level cap once Legionproper is out). On top of that, you can get a promotional level boost to 100 for a new or existing character, so it’s a damn great jump-start if you opt for the pair (especially so if you boost a healer, as you’ll have access to all three primary roles of the trinity).

And oh, how I missed hero classes. Double-jumping and gliding with demonic wings down a giant chasm is a rush, and after the new story was all said and done, I went back to old areas to explore and screw around. Demon Hunters are fast, and probably the most fun I’ve ever had with a melee class in WoW. Damage spec DHs have access to a dash (which can be used in the air), which doubles as an in-combat (key) escape or dodge, and tank specs have a giant leaping smash. Sometimes I wouldn’t even mount, I’d just dash or leap around.

They also have a bunch of wacky powers like Spectral Sight, which can reveal cloaked enemies and see through walls, as well as shoot laser beams from their eyes. It’s silly, but so is the idea of a being who consumes the heart of a demon to gain its power (a process expanded upon in the new Illidan novel). The eye lasers also remind me of Devil Jin from Tekken so it wins on multiple levels.

The focus on only two specs (tanking and damage, or, DPS) is streamlined, but as one of many classes at this point, it’s merely an option. I will say that while DPS is really fun, the tank focus isn’t quite as interesting as the Death Knight was at the launch of Wrath. Though you can’t really say the DH doesn’t have the right tools for the job, with plenty of AOE (area of effect) and single-target hate generation even before all of their (up to level 110) talents are acquired.

Another hero class bonus is the extra storyline. The quest takes place before the current timeline, in Mardum, the Shattered Abyss. It’s even more thrilling than the Death Knight tale, filled with little raid bosses and set to an all-out war between multiple factions. It’s amazing how Blizzard can create something of that scale even if it’s in an instanced, controlled zone separated from the main game world.

I also feel more connected here than I did with Warlords. Major players like Illidan (of course), as well as Maiev Shadowsong and Sylvanas are in, and there’s more voice acting than ever before. The engine is still incredibly dated (going back to WoWis hard sometimes after playing Final Fantasy XIVon a high-end machine with the new DirectX upgrades), but the animations are still really detailed, specifically in regards to the demonic transformation abilities. The first-person cutscenes also do a great job of making your character feel important despite the fact that everyone is getting the same story. MMOs have come a long way with advancements like phasing, that’s for sure.

As someone who was part of a server-first Illidan kill in Burning Crusade,it’s great seeing my favorite expansion revisited (I know a lot of you out there favor Wrath, and that’s cool). Both in terms of the revisiting of the past and seeing iconic locations like the Vault of the Wardens (on the Broken Isles, the new Legionzone that’s housed between Kalimdor and the Easter Kingdoms) in the present. There’s also some massive developments with the lead-in that have me excited to see where it goes, without the “alternate universe” shtick that Warlords had. It feels like there are more stakes involved, and several big characters have already bit the dust.

Right now only the new Demon Hunter class (and storyline) is available, and a bunch of events will spring up in the next several weeks.World of Warcraft: Legion arrives later this month, at which point I’ll be able to test out the new 100-110 leveling process, as well as the new dungeons, raids, and PVP elements. Stay tuned!