Review: Sky: Children of the Light

It’s a bird, it’s a plane, it’s difficult as hell to control

Thatgamecompany is a developer that doesn’t so much make games as it does create playable poetry. Its trilogy of titles for PlayStation sought to establish a connection with players on a more spiritual level. Games like Flow and Floweraren’t much on paper, but when you pick up that controller and experience what thatgamecompany has created, you realize that its gamesare far deeper than some bullet points on the back of a box.

Journey, the developer’s most celebrated title, expanded on the connections it was making with players by allowing us to make connections with one another. Traveling up that mountain with a complete stranger made it one of the most compelling games of its generation, and an experience I will never forget.Sky: Children of the Lightseeks to strengthen those human connections through communication, launching the title on a device that fundamentally changed how the world communicates. Unfortunately, it’s a device not exactly well suited for what thatgamecompany has created. 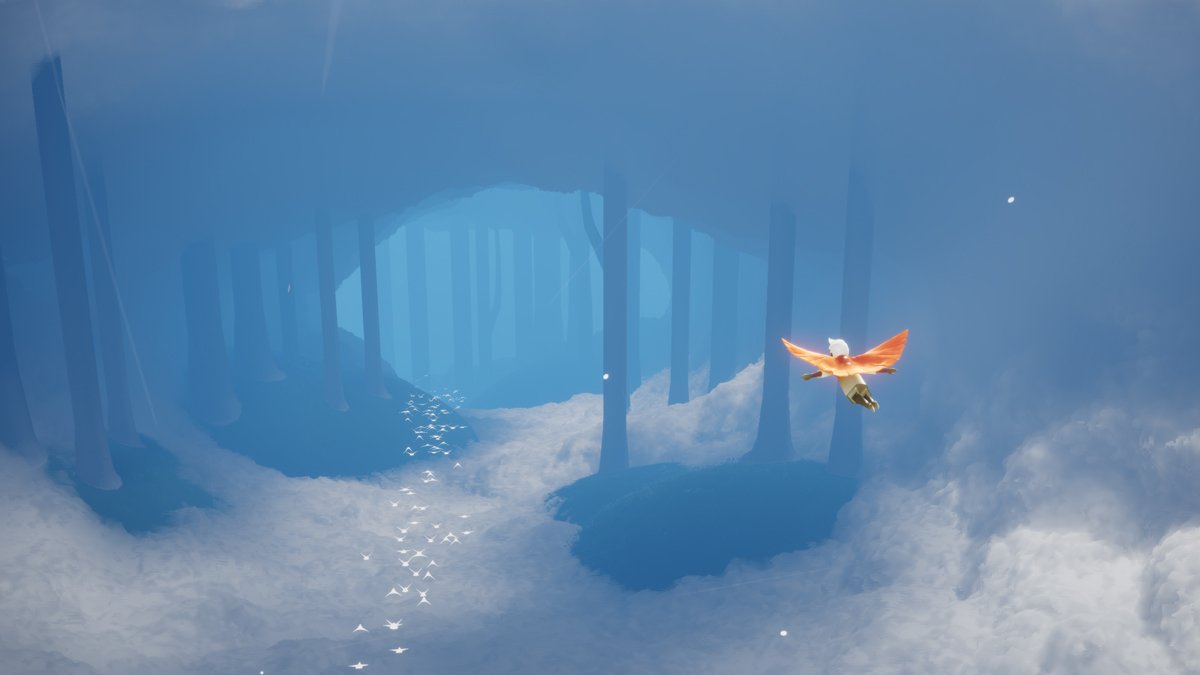 Following in the footsteps of Journey, Sky: Children of the Lightis about embarking on an adventure together. The adventure here is one of restoration. As one of the titular children of the light, you’re journeying through a handful of environments looking for shards of the past that will help you complete the constellations you’re tasked with reigniting. These shards are presented as translucent blue figures who, when followed, will give you a glimpse into the past. They’ll also teach you an expression that is the key to communicating in this game.

Children of the Lightisn’t experienced alone. In this always-online game, you’re joined by up to adozen or more players, all venturing to complete the same tasks. Because of how the game is designed, you’re not always at the center of what is happening. On multiple occasions I reached an area where all the puzzles had already been solved, allowing me to just skip to the end. As clever as that is, it would require me to either wait until the puzzles reset or return to the area at a later time so I may go through the motions and collect any rewards I ignored.

Getting on the same page with other players requires a little bit of communication and everyone is limited in how they communicate to a few simple actions. The most basic way of trying to get another player’s attention is to tap your character. This emits a chord they can use to find you. If you need a bit more nuance in what you’re trying to communicate, you can open your expression menu and “talk” these friends and strangers the same way a mime would. Early expressions allow you to point them in the right direction or wave hello while further into the game’s seven realms you’ll unlock more emotive actions like crying or expressing fear. It’s a system I love because it whittles communication down to its very core in a way that people of all nationalities will be able to understand. Unfortunately, from my experience with playing with strangers, it’s a system that is underused.

Most communication I saw in Sky was players tapping on their characters. It’s effective enough, but a rich collection of expressions and emotions remains relatively untapped. While there is a handful of these emotes that I never found a use for — no reason at all to tell people I’m cold — many could be better utilized by the community of players.

Beyond communicating, players are also expected to work together if they want to unlock every single expression and expansion of your flying ability. While you can, I believe, reach the end of the game by ignoring all the people around you, there are certain portions of Skythat are locked behind cooperation. Doors that need more than one person to open, a series of switches that all have to be pressed at the same time, many parts of the game can be inaccessible to players if they’re unable to find a friend to play with or if the randos zipping all around them ignore their calls for help.

Thankfully, outside of one, two hour period where I couldn’t find a single person to help me open a door, the Sky community is, right now, exceedingly generous with their time. I’ve traveled most of the realms in a group with two or three strangers as we worked together to find the many secrets and solve the puzzles these areas hold. Thatgamecompany said it envisioned Skyas a social game and that’s exactly what it is. Even if I can’t communicate directly with my fellow travelers — though a few benches in the game do let you text chat — I could tell through their actions that we shared a common goal, making our journey all that more beautiful. 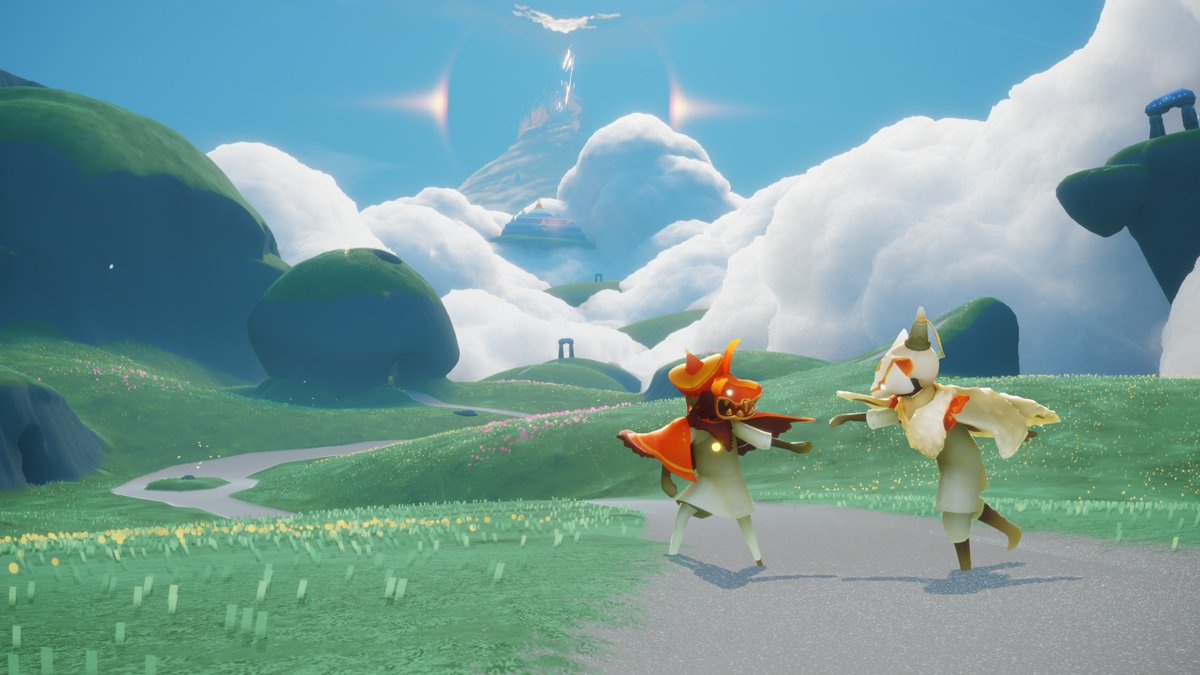 Even if we’re not using the full scope of our communication options, I felt a connection with a few of the players I ventured out with. I added them as friends, unlocked actions like high-five and hugs to show them I care, and sent them little gifts they could find in the stars. Growing these relationships to the extent this game will let you grow them is cathartic if limited by the free-to-play nature of the game.

Skyfollows in the footsteps of other contemporary F2P games by limiting its microtransactions to mostly cosmetics. There are no timers or lives or anything like that to worry about as thatgamecompany would rather try and get some money out of you by selling you candles. Candles are the prime currency of Children of the Light. You can earn them in-game by collecting light or you can pony up some cash to unlock everything quicker. Candles are used to establish new friendships and unlock the awkward reward trees each piece of a constallation holds. Also like other contemporary F2P games, Sky employs a season pass where people who pay earn twice the rewards as those who don’t during a given season. Whether or not you’ll want to stick around for more than one season will depend on how well you put up with the touchscreen controls.

Thatgamecompany first announcedSky: Children of the Light— then simply known asSky— back in 2017 during an Apple event. It was part of Apple’s comical attempt to show it was serious about gaming by expounding the virtues of its new Apple TV 4K. Almost two years later, the game is finally here and that tvOS version is nowhere in sight. Instead, as of right now, our only options for enjoying this imaginative and spiritual world are our iPhones or iPads, and it’s clear that’s not how a game like this should be played. 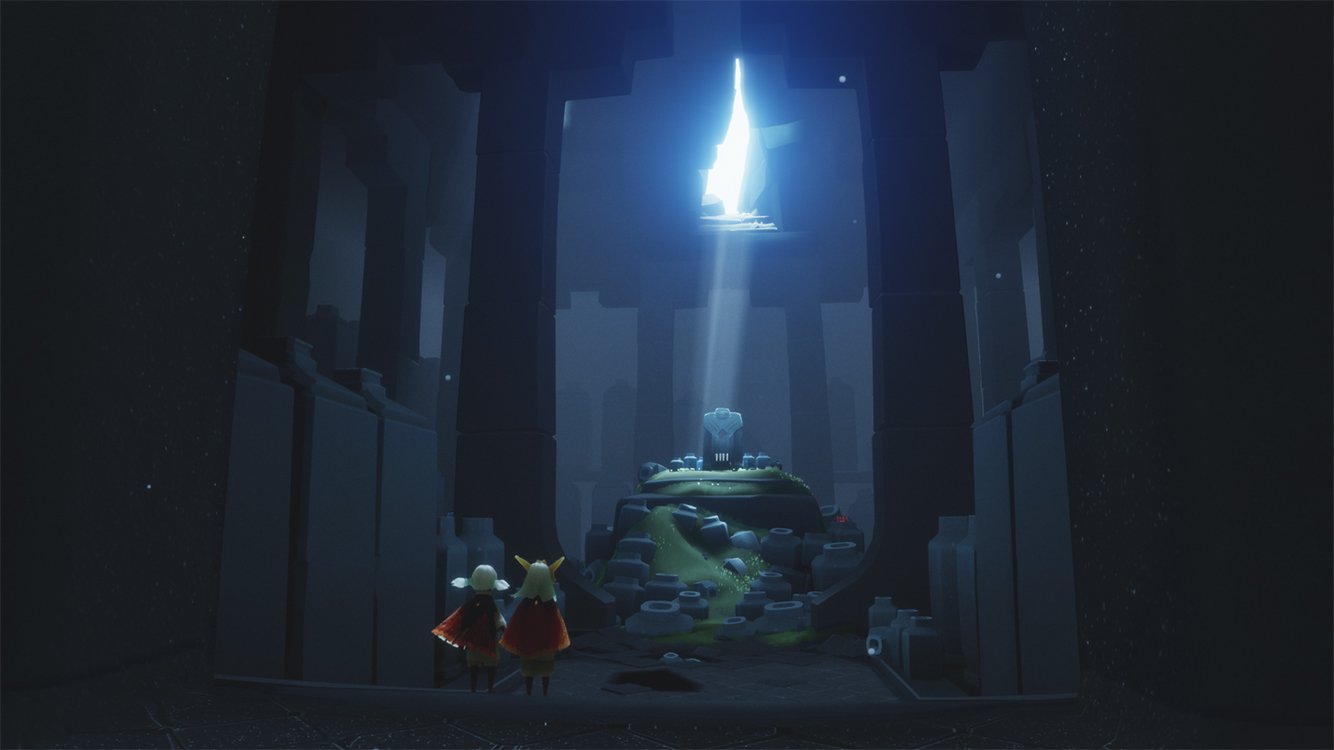 There are two touchscreen control options for Sky: one-hand and the absolutely-required-on-iPad two-hand. Neither is ideal. One-hand is ridiculously unreliable in even the most basic situations while two-hand makes ground traversal easier but does nothing to improve the poor flight controls. There are mandatory flying sections of each realm and you’re able to freely fly through the rest of each area so long as you have enough flight power, but rarely did I ever feel totally in control of my character in these situations. The floaty nature of movement, while heavenly to observe, can often be a nightmare to grapple with touch screen controls. Not helping the situation is the camera. Camera controls lack fluidity and random movement of the lens in tight platforming sections can cause unnecessary troubles.

I would need to grow a few more hands to count how many times I had to stop playing Skyout of frustration. Whether it was the game not allowing me to move off a ledge or sending my character spiraling down the side of a mountain when all I did was slightly touch the digital joystick, the touch controls and often excruciating camera gut what should be an awe-inspiring vision of discovery. I absolutely believe Sky: Children of the Light is a game most everyone should experience because it is blissful, imaginative, and a sight to behold. I just think most everyone should wait for a console or PC release to do so.

[This review is based on a retail build of the game downloaded the App Store.]