Capcom has released two brand new skins as DLC for its flagship scrapper Street Fighter V: Champion Edition. Both outfits belong to slick-kickin’ antagonist Juri Han, chosen as the winning entries in a costume-designing contest held by the publisher back in 2020. The outfits are available for a couple of bucks each, or are included in the latest Premium Pass.

The Street Fighter community, jam-packed with talented artists, came through with an amazing collection of costumes for a variety of SFV‘s World Warriors. When the finalists were put to a public vote, however, the #JuriFeet army came out en masse, and both winning entries now hang in the Korean assassin’s wardrobe. Admittedly, it would have offered more variety to incorporate a “one finalist per character” ruling, especially given how awesome some of the other entries were. But what’s done is done. 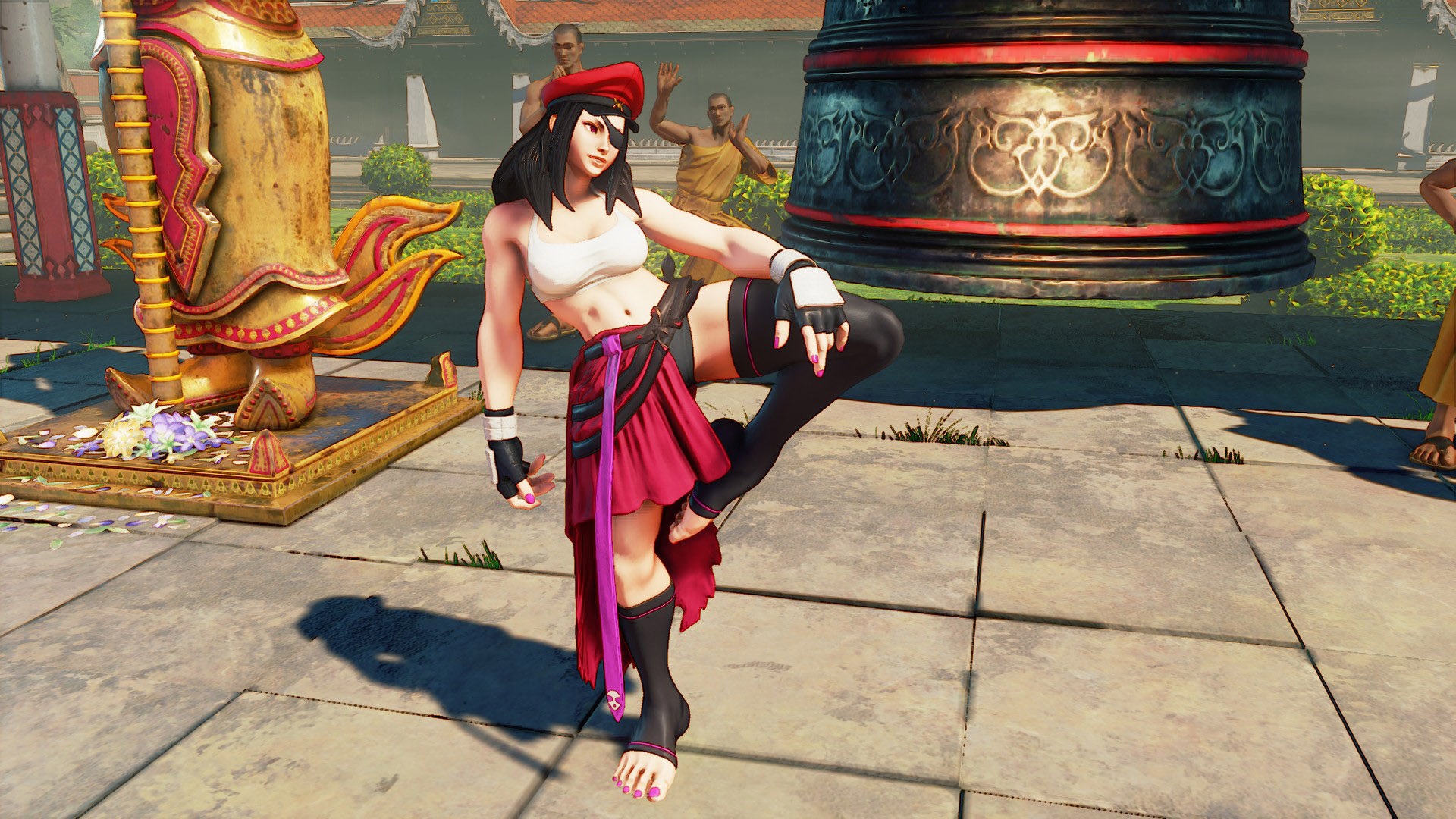 The first outfit – as designed by Steven “JNxC” La – is an ensemble similar to that of a high-ranking Shadaloo official, complete with M. Bison style cap and a torn uniform. The look is completed with fingerless gloves and mismatched toeless leggings. Juri’s secondary new threads – as designed by second winner “Gar” – sees Ms. Han get her gang boss on, with an intimidating set of robes, spiked heels and chest wraps that wouldn’t be out of place in Toei gangster movie from the mid-1970s. Somebody get this girl a wooden sword.

Frankly, I’m gonna see both of these outfits as a reward to Juri mains for putting up with Capcom’s disinterest in the character since her SFV arrival way back in 2016. While Juri remains an absolute motherfucker in her deliciously dark attitude, it has been an uphill battle competing against the mid-to-high tiers. Characters such as Cammy and Ibuki absolutely run rings around Juri, while she wrestles with her complex-for-the-sake-of-complex gimmicks and “clearly-an-overhead-but-lol-no” attacks. 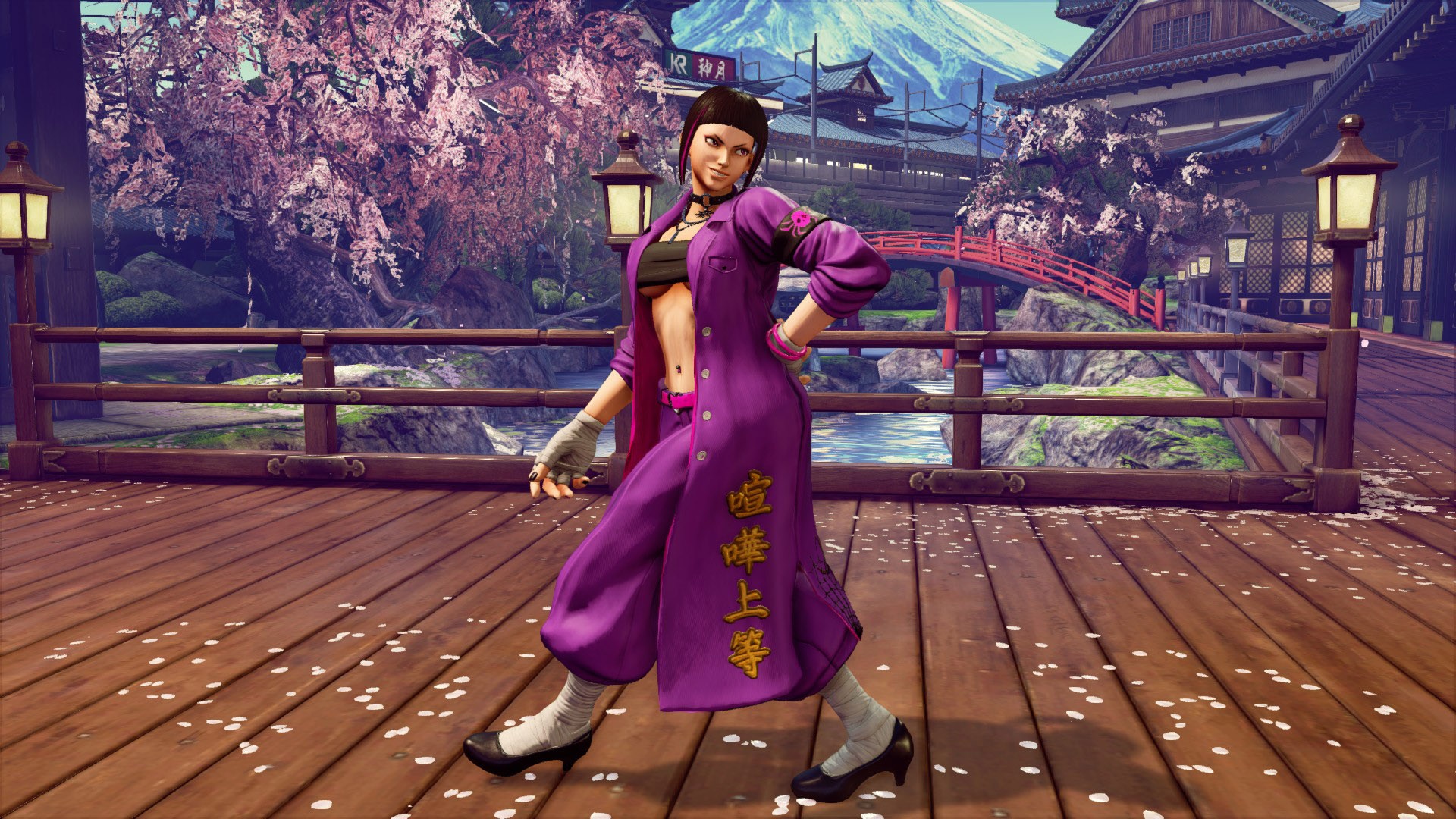 Don’t get me wrong, in an expert players’ hands, (for example, AiAi or TheRedGambit), Juri can be a formidable, dangerous opponent. But for yer jobber pal Moyse, it’s mostly been a case of working ten times harder for four times the reward, especially when compared to my success as Laura or Karin. Despite her cool style, unique aesthetic, and alluring, femme-fatale nature, Juri has languished consistently as one of SFV‘s weakest characters. So I’m gonna take these new outfits as my prize for ALWAYS BELIEVING.

Even with Poison on the roster and my long-time Street Fighter main, Rose, on the horizon. I think I’m still going to continue with The Struggle. I just can’t quit Juri. She has her claws into me. When the stars align, she can be hella satisfying to play, but there’s no denying that you basically have to be a loyalist to stick to her. Or failing that, simply a sadist… maybe that explains why I fell for her in the first place.

“Alright, let’s make this a lot of fun.”

These costumes in #SFV can be purchased as a part of the Season 5 Premium Pass, in-store for $1.99, or obtained with 40K FM. pic.twitter.com/4wrBtAZzfK