The first hour of the game

With The Walking Dead, Telltale had an advantage when it came to selling a game to a mass audience. The comic series is huge, and you have the AMC television series to back it all up. Plus, everyone knows what a zombie is. The myth of the zombie has been with us for hundreds of years now.

With Fables, it’s a bit of a harder sell here. Sure, shows like Once Upon a Time and other similar concepts have popped up in recent years, but before television executives thought it would be a good idea to mix up our childhood tall tales, there was author Bill Willingham who came up with the concept of “What if we brought all these stories from our childhood together?”

While The Wolf Among Us will definitely make fans of the comic series happy, outsiders shouldn’t have to worry here either. All you need to know is that there’s a murder mystery you have to solve, and it just so happens to involve characters like the Big Bad Wolf, Snow White, Beauty, Beast, and so many other mythical characters.

For those not in the know, the world of Fables involves these beloved stories of our youth such as Snow White, Red Riding Hood, Aladdin, and so many others all living in one big world. Sort of like neighboring countries, if you will. All of the characters you meet at the beginning of the comic series were ousted from their respected homes and forced into our world, the human world (or the Mundy world as the Fables like to refer to mundane reality). Here they reside as refugees, while a big evil known as the Adversary is waging a war for total control back in the homelands.

There’s a huge backstory for sure, but you don’t really need to have read any of the comics to understand what’s happening in The Wolf Among Us. What you should know is that there are some very heavy adult themes with these characters. Just because we’re talking about princesses and fairies doesn’t mean it’s all happy endings. To that point, there’s murder, there’s war, there’s drama, there’s sex, and tons of jaw-dropping moments you wouldn’t expect involving these characters. It’s well worth the read, folks.

Anyway, The Wolf Among Us takes place about a decade and a half before the first comic, and stars Bigby Wolf, otherwise known as the Big Bad Wolf. In the Fables universe, the wolf that went after Little Red Riding Hood and the Three Little Pigs is the one in the same here. When all the Fables went into the human world, everyone was granted a fresh start. Villains were given a clean slate, and Bigby choose to lead a more virtuous life. He’s still kind of an asshole, though.

Bigby’s role is more or less that of a sheriff. It’s his responsibility to keep Fables safe, and more importantly, hidden from the humans. Episode One: Faith, begins with you on your way to some kind of domestic dispute called in by Mr. Toad. Upon entering the apartment complex, Bigby spots Mr. Toad in his real form. Characters like Bigby sport a glammer charm that they get from witches in order to maintain a human appearance.

Bigby isn’t happy that Mr. Toad is in his natural form out in the open, and threatens to send him to The Farm, a place where non-human Fables live. The entire conversation here is happening in true Telltale form, as you have a few options in how to respond. You could ignore this incident with Mr. Toad, and who knows, maybe he’ll help you out in some way in the future.

You have four options in how to respond to characters, with one being to say nothing at all. I saw this option pop up most of the time, and it kind of plays to Bigby’s character. It’s basically the asshole response, where you just stand in silence giving someone a mean look. Bigby isn’t really all that concerned with what others think of him. 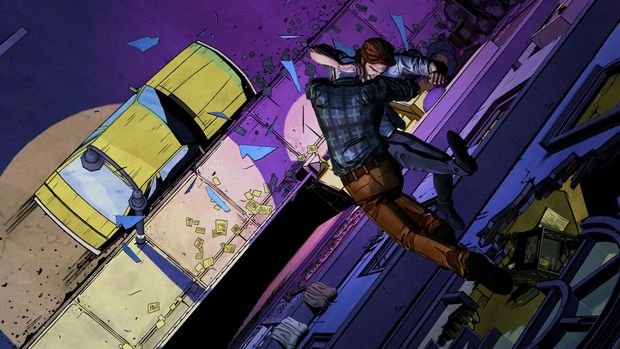 Bigby heads up to the apartment where the dispute is happening and sees that the Woodsman is attacking an unknown female. The Woodsman — the same one that filled Bigby’s belly full of stones and left him to drown in a lake as the tale goes — is drunk out of his mind. He wasn’t happy with this call girl, who already has some bruising over her body, black eye and all. The Woodsman wants to fight, and for the next five minutes you’ll be attacking and avoiding his strikes as you try to match the button prompts that pop up on screen. While you have to match the right button prompts, you are given options of how you want to inflict pain on The Woodsman such as deciding what piece of furniture you want to slam him into.

Eventually the two of you are thrown out of the fourth story window and land on the streets below. The Woodsman is able to recover before Bigby, and starts to choke him out. Bigby is about to transform into his true form before an axe is smashed into the back of The Woodsman’s head by the mysterious call girl. No, that’s not the murder we’re talking about here. Sure, there’s an axe in his head and not to mention he did just fall out of a building, but the Woodsman is alive, and is able to escape before Bigby can talk to him. Fables can die, but it will take something very extreme to kill one. Way more extreme than an axe into a skull, for instance. Age isn’t an issue either when it comes to death — some of these characters have been alive for centuries. 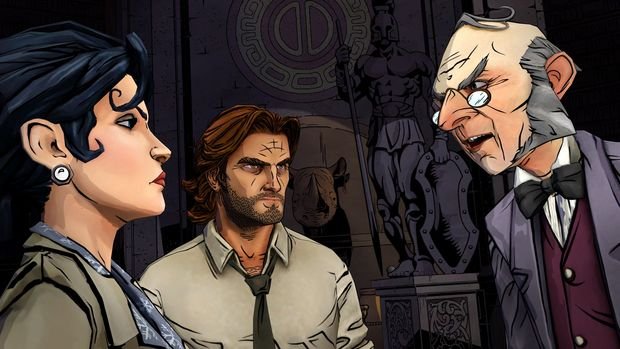 Bigby questions the girl about what’s happened, and seeing as how the situation has resolved itself, the player returns to Fabletown, the main home of the Fables in New York.

After a little odd run in with Beauty, and then Beast at around 2AM, Bigby settles into his apartment where Colin the pig is crashing. Bigby kind of owes Colin after the whole huffing and puffing his house down that one time, so he waves an eye at Colin being in his natural pig form. Plus, the two seem pretty chummy. Well, so long as you help Colin smoke a cigarette or drink some beer at least. 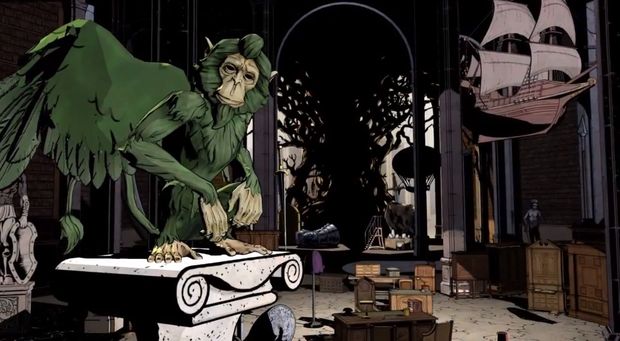 To close the demo, Bigby is woken up by Snow White in the middle of the night as they’ve found an actual dead Fable right on the front entrance of the apartment complex they all reside in. And it’s the same girl we met earlier in the night during the altercation with The Woodsman.

Snow, Bigby, and the flying green monkey Bufkin do some digging in the famous Business Office’s archives, and are able to figure out who the girl is. From here, we’re shown one of the major changes that you can expect over The Walking Dead’s gameplay mechanics. You’re given two paths, basically — either you can go interview the husband of the dead girl, or return The Woodman’s apartment as a new incident has arisen there according to Mr. Toad. You decide where to go, but know that time is a factor. There will be consequences for the path you choose to take, and these decisions will alter the story, in this episode up to the last.

Investigation isn’t part of the gameplay, but it is part of the plot. You’re aren’t always really in situations to look for clues or details, but you can look around for more story points if you want. This design plays into Bigby’s conflicted nature. He could be a proper detective, one that goes by the books. Or go more with his wild side as the Big Bad Wolf to sniff out crime scenes and use his gut instinct. You’ll find different things depending on how you investigate the situation. 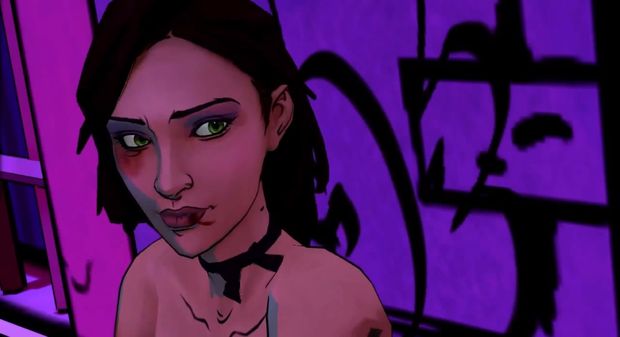 On the technical side, you can now hold down the right trigger to move your character a little faster. Also, the Telltale engine has been improved to resolve issues players had with The Walking Dead such as save-state problems, frame-rate hiccups, and the like. The technology for Telltale games kind of gets locked into place with the first episode to a series, as the subsequent episodes are treated as downloadable content. So a lot of the issues have been ironed out, Telltale told me.

I have to mention how gorgeous the visuals are too. The heavy comic-style just works here, and it all looks like moving concept art.

As a big Fables fan, I was super pleased with what I saw of Telltales’ take on the series. It doesn’t butt up against what we’ve already seen in the comics, and it’s open enough that even non-fans can enjoy this. Really, if you enjoy murder mystery and are a fan of Telltale’s work, then you’re in for a good time with The Wolf Among Us.