Hello, you sexual Tyrannosauruses, and welcome back to The 300, my ugly motherf***ing attempt to watch 300 movies in theaters in the year 2018. I’ll be seeing new releases, classics, hidden gems, and festival films to experience the wide world of cinema in all its glory. With so much variety, I hope you see something here you can discuss or seek out.

As always, there are three rules for The 300:

A light week for The 300 because I’ve been out of New York City and doing some family stuff in the Bay Area. Consider this a little rest before the 2018 New York Film Festival kicks into gear. The festival runs from September 28th to October 14th, with a slate that includes Alfonso Cuaron’s Roma, the Coen brothers’ The Ballad of Buster Scruggs, and Orson Welles’ final film The Other Side of the Wind. I’ll be in a NYFF press screening or just getting out of one by the time this goes up. Look for a NYFF preview early next week and the first reviews from the festival in the next installment of The 300.

In addition to the NYFF, I will also be covering the 2018 Brooklyn Horror Film Festival, which runs from October 11th to October 18th. This year’s BHFF includes Tilman Singer’s acclaimed throwback Luz, the Monster Squad documentary Wolfman’s Got Nards, and Isabella Eklöf’s disturbing Sundance film Holiday. BHFF has a strong track record of programming solid horror/horror-adjacent movies from all over the world, and this year seems like no exception.

With NYFF and BHFF plus other movies coming out during the first phase of awards season, I should be very close to 300 movies by the end of October. My eyes will also hurt really bad. 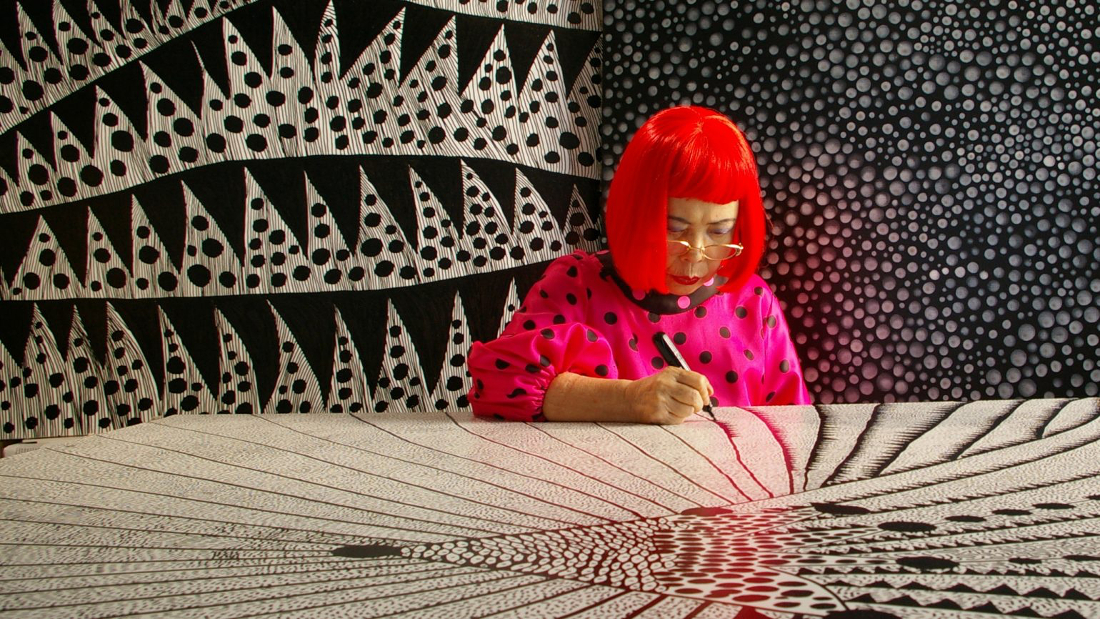 Heather Lenz’s loving portrait of artist Yayoi Kusama builds slowly, giving us a sense of who Kusama is in her work and her troubled personal life. That steady, deliberate accretion of information makes the film’s closing moments so moving. The Japanese avant-garde artist moved to New York City in the late 1950s, embedding herself in the pop art and abstract expressionism scenes. She was mostly ignored by the art world until she used performance art to protest thew Vietnam War. It’s fascinating to watch the evolution of her aesthetic, whether it involves painting, happenings, or installations. She begins with work reminiscent of Joan Miro by way of Paul Klee, reshaping those influences into her own distinct visual sensibility: bright colors, obsessive and recursive lines, and a repetition of shapes, mostly the polka dot. The dot is an object that denotes both a presence and an absence—a whole and a hole, a shape or a space.

Lenz presents compelling coincidences suggesting that despite Kusama’s obscurity throughout much of the 1960s, several of her more famous male contemporaries stole her ideas without giving her any credit. The movie left me curious about Kusama’s mental health issues, which inform her work and are a part of her current living situation. While the movie doesn’t probe far into Kusama’s psychological state, we get a sense of something amiss in archival footage. It’s hard not to notice a troubled look in her eyes taking hold at a certain point of her life. But maybe I wonder what’s on her mind because the documentary is so effective at charting the career of such a lovable 89-year-old genius. 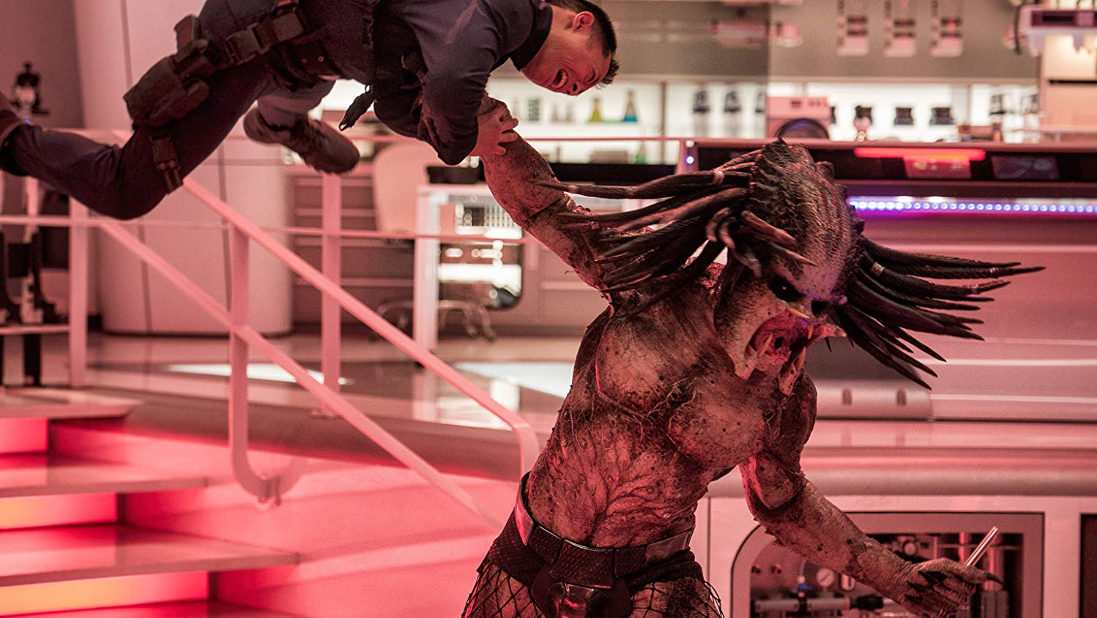 The Predator may be the worst movie I’ve seen in 2018, beating out the juvenile banality of The Happytime Murders (The 300 Week 34) thanks to its douchebro swagger and incompetent storytelling. I’m surprised that Shane Black is capable of writing a movie this dumb. It plays out like a teenager’s first stab at Predator fan fiction, with a bunch of clunky callbacks to the original film. Bad movies in a franchise should really avoid making overt callbacks to their better predecessors.

There are three movies jammed together in The Predator. Each is pretty bad on its own, but they’re all far worse with their powers combined. One story involves a bunch of vets suffering from PTSD joining up with a scientist to fight an alien; another story involves a child who has superpowers thanks to autism playing with alien technology; and the third involves a good-guy Predator fighting a bigger bad-guy Predator. The cast does their best to make chicken salad out of chicken s**t, but no one can overcome the script or the bizarre editing choices. The Predator feels like it was blown up by test audiences and duct-taped back together as quickly as possible.

The worst thing about The Predator is its total lack of personality, from the story itself to the bland assortment of characters. The meatheads in the original Predator had distinct character traits and moments to shine. In The Predator, everyone dutifully delivers their lines, but they signify nothing and communicate less. Even the Predator seems lost in the film. It’s a good-guy alien trying to help humans fight a big bad-guy alien, yet the good-guy alien never once tries to communicate with the humans about its intentions or the mutual threat they’re facing.

The only thing memorable about The Predator is its wall-to-wall badness. Oh, and also that Shane Black hired his pedophile friend for an inessential role that was cut from this trash-heap film. 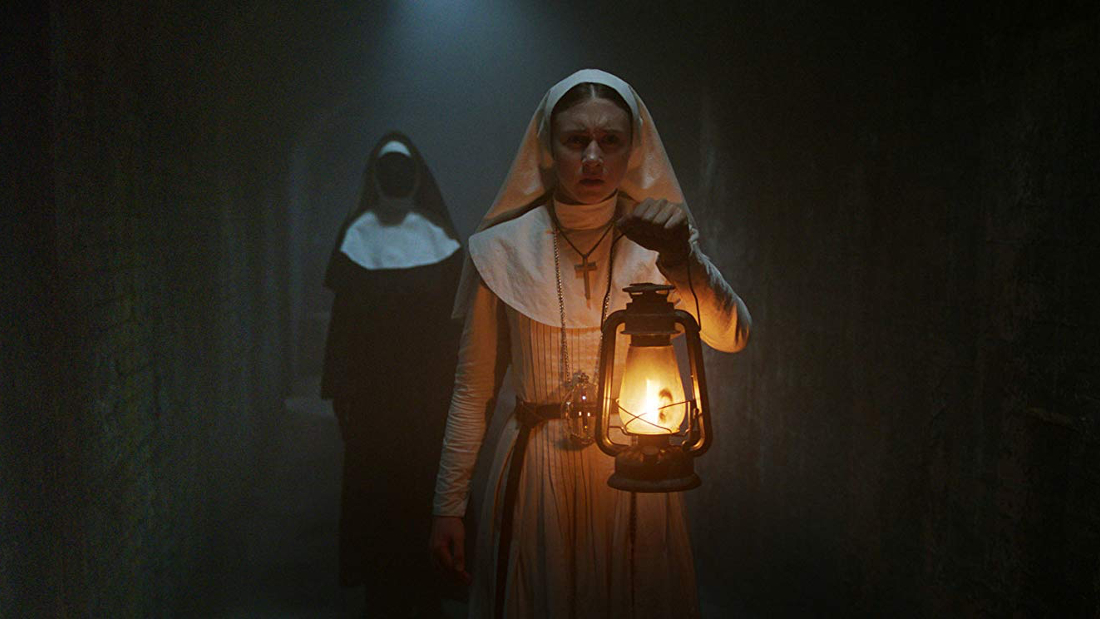 I’ve never seen any of the other Conjuring movies, so watching The Nun meant I wouldn’t necessarily pick up on the fan service or nods to other films in the franchise. It’s not good, but watching it the day after The Predator made me enjoy it more than I would have otherwise. Chop away the bookending material linking it to the Conjuring franchise and The Nun sort of works as a throwaway schlock feature. The thin plot—two Catholics walk into an evil monastery, hilarity ensues—is a pretext for some delirious set pieces that feel like they came from a lesser 80s Italian horror movie. The Nun is more silly than scary, but the movie still checked most of my boxes for a decent watch on cable while fighting a hangover. I should probably check out the main Conjuring films now.

A modest mission accomplished, Nun; you pass with a C-. Thank The Predator for throwing off the curve.