Except you kinda have

Luigi’s Mansionholds a very near and dear place in my heart. It was the first game I bought for my GameCube… or technically second because the cashier at WalMart scanned Star Wars Rogue Squadron II: Rogue Leaderfirst. Either way, it was the first GameCube game I played, the first one I beat and the first new series of the 128-bit era that I absolutely fell for.

The series has been stuck in my mind as of late. Since the announcement of Luigi’s Mansion 3, I’ve felt myself gravitating back towards my original copy of Luigi’s Mansionand its 3DS sequel Dark Moon,only able to resist the urge to drop everything and play them, because this website keeps me far too busy with other games. More specifically, it keeps me busy with new games; games I haven’t played before. Life’s short and I can’t spend all my time reliving the past greats when there are so many new titles I’ve yet to experience.

No, if I’m going to enjoy a Luigi’s Mansion game right now, it will have to be one I’ve never played before. As luck would have it, such a game exists about five blocks from my apartment.

In 2014, a year after the release of Luigi’s Mansion: Dark Moon, Capcom pulled back the curtain on an arcade spin-off of the franchise. Luigi’s Mansion Arcadetakes the ghost-sucking action of the series and puts it into an on-rails shooter. I’ve been dying to play this since it was first announced but only got the chance recently when I learned the Round 1 Bowling & Amusement Center at my mall had the cabinet among its impressive line-up of Japanese fighting and rhythm games. With $20 worth of credits, I set out Friday night to see what it was I’d been missing all these years.

Calling Luigi’s Mansion Arcadean original game would be something of a lie. The locations within are all modeled after mansions from Dark Moon. There is the beginner-friendlyGloomy Manor, the slightly more difficult Old Clockworks, and the unlockable final Treacherous Mansion. Only small bits from each mansion are explorable. Gloomy Manor features branching pathways while Old Clockworks and Treacherous Mansion are more or less linear in design.

Luigi’s Mansion Arcadecan be played with two players and features two settings: a normal mode and an easy mode. Normal mode requires players to flash ghosts with the Strobulb before sucking them in with the Poltergust 5000. Easy mode removes the requirement to use the Strobulb. I went with normal mode and dove into Gloomy Manor (though I did have the option to skip it and go straight to Old Clockworks).

My first thought, as I sucked up the easy Greenies I encountered right out of the gate, was how much Nintendo missed out by not making a Luigi’s Mansionsequel for the Wii. Or even the Wii U. The Poltergust 5000 guns in the arcade cabinet mimic a Wii remote almost to a “T.” There’s a button on top to activate the Strobulb and a trigger to start the sucking action. That’s just the “A” and “B” buttons of the Wiimote, only I have to grab this gun with both hands. It even uses the same type of pointer controls that made on-rails shooters such a heavenly genre to play on the console. 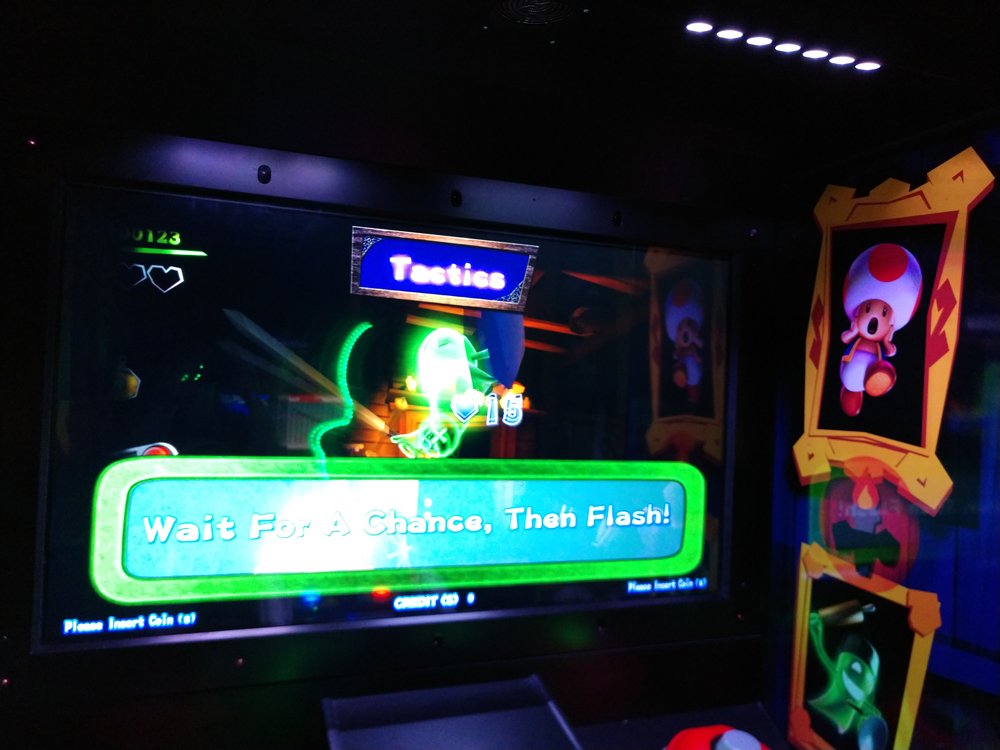 Anyway, Luigi’s Mansion Arcade‘s mansions are split into individual rooms that are explored one at a time. Gloomy Manor feels like the selected areas were chosen at random while the latter two mansions are more adequately interconnected. Just like in the original games, there’s money hidden throughout each room you collect using the Poltergust vacuum. There are also safes and treasure chests to be opened by charging up the Strobulb and flashing them. Money is importable because it, along with how many ghosts you suck up, combos you get — sucking up more than one ghost at a time — and how many hits you take factor into your final score.

Ghosts found throughout the mansion include the Greenies, Slammers, Hiders, Creepers, and Goobers, as well as stronger variations of the first three listed. At the end of each mansion is a boss battle and these sections are actually easier than the rest of the house. Gloomy Manor’s Brain is a snap to defeat if you keep using the vacuum on anything he throws at you and the Three Sisters of Old Clockworks operate in a predictable, through increasingly speedy, pattern. King Boo is waiting at the end of Treacherous Mansion, for any players able to make it that far into the game.

Now, because this is an arcade game, it does its absolute best to drain players of as many credits as it can. Luigi has two hearts and a hit from a ghost takes usually takes half a heart away. Four hits and you have to pay if you want to stay and play. Because the mechanics of the game are relatively simple, Luigi’s Mansion Arcadeoverwhelms players with an abundant amount of ghosts. On easy mode, this would have probably been no issue. On normal, it’s a delicate balancing act of knowing when to stop sucking up ghosts so you can flash the ones about to hit you. 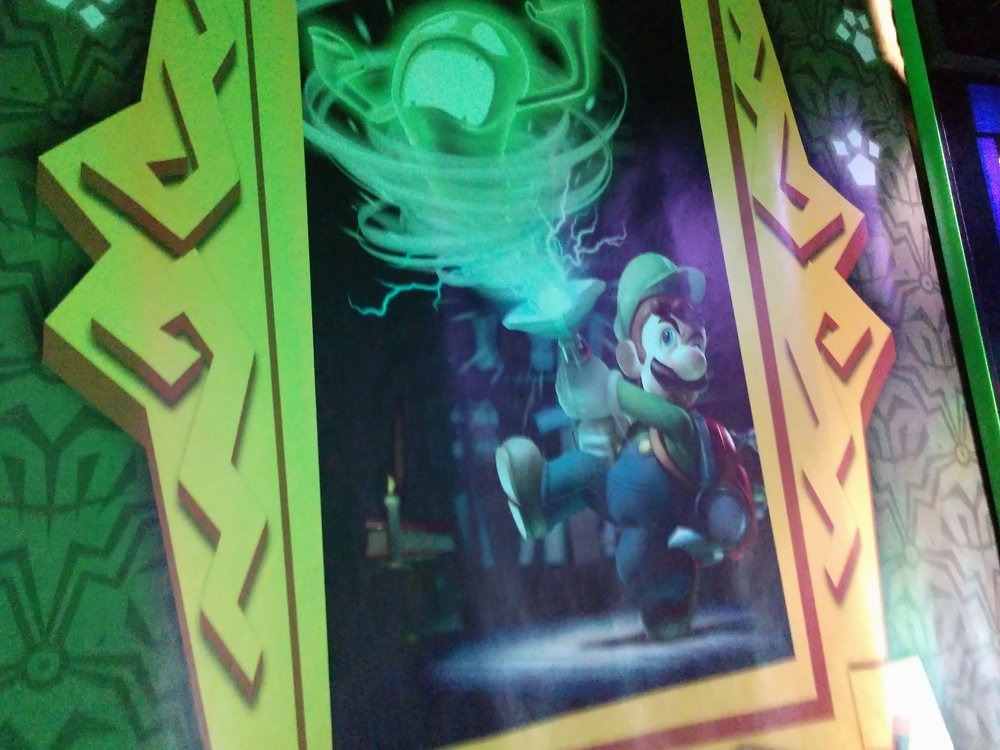 It’s easier said than done because the game can throw an immense amount of enemies your way. Not just ghosts, but also spiders, bats and ectoplasmic projectiles. While the variety of ghosts you face is relatively low, they do grow more difficult towards the end of Old Clockworks and right at the beginning of the final mansion. There is a Strobomb you can use if you’re inundated, but you’re limited to just two of them with every credit.

Unfortunately for me, $20 wasn’t enough to reach the end of the game. Halfway through Treacherous Mansion, I ran out of credits. Because the machine uses cards instead of quarters or dollar bills, there was no way for me to refill my card and return to the game before the “Continue?” counter reached zero. My final score was good enough to put me into 286th place…which is actually pretty bad.

After four years of waiting, finally playing Luigi’s Mansion Arcade was absolutely worth the time and money. Not in a way I’m going to claim it’s the greatest arcade game ever. That would be silly because Star Wars Episode 1: Pod Racerstill exists. But it certainly reminded me of why I love this series so much, and only furthered my anticipation of the crazy hotel we’ll be exploring when Luigi’s Mansion 3 launches on Switch next year.