The original Kickstarter game, High Strangeness, is set for release on May 6

A super-meta jaunt through through 12-bit gaming

Ever since the big Kickstarter boom of 2012, there’s never been a short supply of developers looking to get their next title going through crowdfunding. From metroidvania action-RPG titles referencing the golden years of games, to epic adventures games seeking to redefine a genre, there’s certainly no shortage of creativity despite the volume. But while people often look at 2012 as the year crowdfunding really took off, there have been many successes before that.

Back in 2009, a couple of guys decided to take some advice from a friend and use a neat little website called Kickstarter to fund their project. That title was High Strangeness, a 12-bit action adventure title (yes, you read that right) referencing the 8 and 16-bit eras of gaming. With their final funds reaching over $1500, they ended up becoming the first successfully funded videogame project on Kickstarter.

And now after nearly six years, the folks at Barnyard Intelligence Games have teamed with Midnight City to get their quirky, and very clever throwback title out for fans. 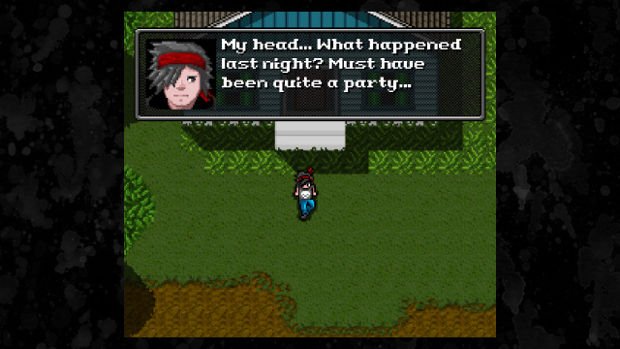 “As the original amount was for $1500, it’s been a passion project for us,” said lead developer Ben Shostak. “We’ve been working on it all that time since, but eventually along the way, we got picked up by Midnight City and they were able to help us get it finished up and with the art assets and other resources. We had a successful Steam Greenlight, and now we’re ready for release next month.”

Initially taking place in middle America, a mild-mannered teenager finds that his home has been invaded by creatures resembling shadows. Soon after, he’s transported to a mysterious world connected by two parallel dimensions, and after coming into contact with an ancient artifact, he’s able to transition between the dimensions, which resemble 8-bit and 16-bit interpretations of the new world he inhabits. Using gadgets and several artifacts he uncovers, he begins his quest to unravel the mystery behind the shadow creatures, while trying to find his way back home.

Understandably, I was a bit confused by their labeling of High Strangeness as a 12-bit adventure game, but after playing the game, it became quite clear. The main character is essentially trapped within a videogame that’s having difficulties trying to reconcile its place between the between the 8-bit and 16-bit eras of gaming. Hence, the 12-bit label. As the in-between, he’s able to transition to different eras, while taking advantage of the unique visual styles, along with the physics and AI parameters of the respective eras. 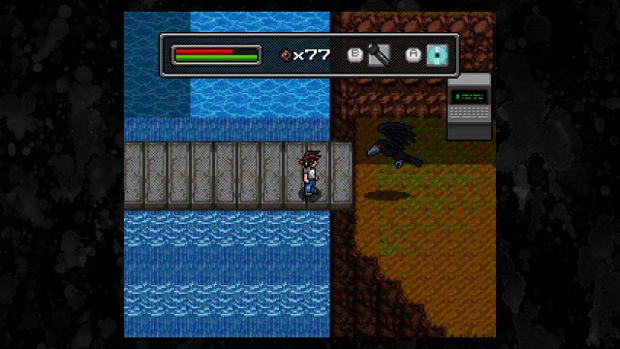 Similar to The Legend of Zelda: A Link To the Past or Secret of Mana, action takes place from an overhead view in real time. In addition to his graphical transition ability, the hero will have access to a wide range of abilities. Starting off with a flashlight, which doubles as a melee weapon, he’ll gain new gadgets and abilities such as firecrackers, which can be thrown at enemies and used to destroy weak walls to find new areas. When our hero defeats foes, he’ll acquire crystal eyes which can be used to spend on upgrades in the character menu. Similar to action-RPG titles, you’ll be able to focus on particular traits and attributes, and build your hero out to your liking.

While at first glance, it seems to be one of those titles trying a bit too hard to relive the classic era. But thankfully, the “meta-ness” of High Strangeness is much more than simple style. The transition between the bit worlds is totally by design, which will change up enemy A.I, puzzle solving, and exploration. Think Light and Dark worlds from A Link to the Past, but with videogames. For instance, 16-bit world features eight-way degree of movement, while the 8-bit world has only grid based movement. In some cases, enemies will appear more menacing and more difficult in 16-bit mode, but switching over to 8-bit mode will severely limit their attacks and movement. Moreover, certain clues and obstacles will only be present in the 8-bit areas.

During the Easter Island level, I was able to see traps hidden in the ground in the 8-bit world, but for the 16-bit world, the extra graphical power allows the traps to be more well hidden. I know, it’s so meta, right? And it totally works. I was kinda geeking out during my session, as it was a pretty neat nod to how self-aware it is the style and limitations of the era. It was cool seeing 16-bit versions of the common enemies, these clothed monsters with tentacles, turn into these somewhat harmless and neutered looking enemies in the 8-bit world. 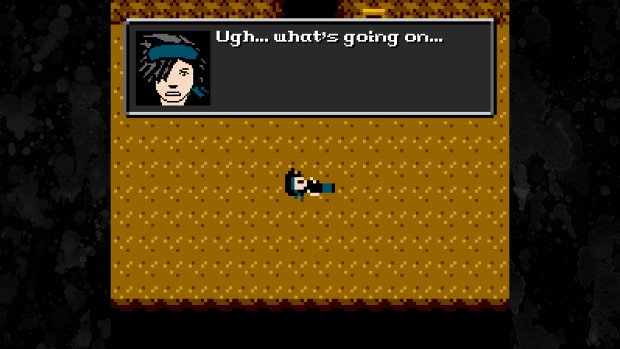 By the way, that friend that inspired the developers to put themselves out there on Kickstarter was Rich Vreeland, also known as Disasterpeace. Along with Dino Lionetti from Cheap Dinosaurs, Disasterpeace has also contributed some music to High Strangeness. The score is totally a love letter to the classic era, focusing heavy on chiptune arrangements that are pretty catchy, but also very exciting and ooze style.

I spent a nice amount of time with High Strangeness, and I could tell I only scratched the surface of what it has in store for players. There are many dungeons and locations to explore, each with a 8-bit and 16-bit rendition, and there’s even a section where you’ll play as a talking cat for some reason. It sounds so ridiculous, I know it’ll be really awesome to see unfold. I’m a bit of a sucker to have a game be so self-aware of its genre, and the medium itself, and High Strangeness is certainly shaping up to one of those titles that’ll not be fun to play, but also to examine for the number of references and nods to the classic era.

It’s been a long time coming, and to finally see the original Kickstarter game project reach the finish line is pretty exciting. Granted, it’s been about six years, but better now then never, right? They’ve made good on their commitment to the fans, and it’s shaped up to be something quite special.