The sweet annihilation of Nuclear Throne

I DEMAND A CROWN

It may not seem like it, but most post-apocalyptic narratives are fundamentally optimistic. They might be set against a godforsaken backdrop of radioactive fallout with roaming packs of cannibalistic thrill-killers, but beyond all the horror there is always a glimmer of hope, always something to hold onto.

They can be used to illustrate the redemptive power of a clean slate, the chance to start again. Look at something like Fallout 4 with its emphasis on rebuilding, on getting humanity back to where it was after being kicked down a few pegs by nuclear war and giant radioactive scorpions. They can be about family and the importance of sticking by the people you care about, as seen inThe Last of Us, with broken people healing and bonding over the corpses of raiders and mushroom-zombies. These are stories about love and trust, even if they play out in the nightmarish hellscape of a broken world. The post-apocalypse is supposed to teach us about the importance of coming together, of valuing peace over conflict, about what is good and hopeful in mankind triumphing against his darker nature. 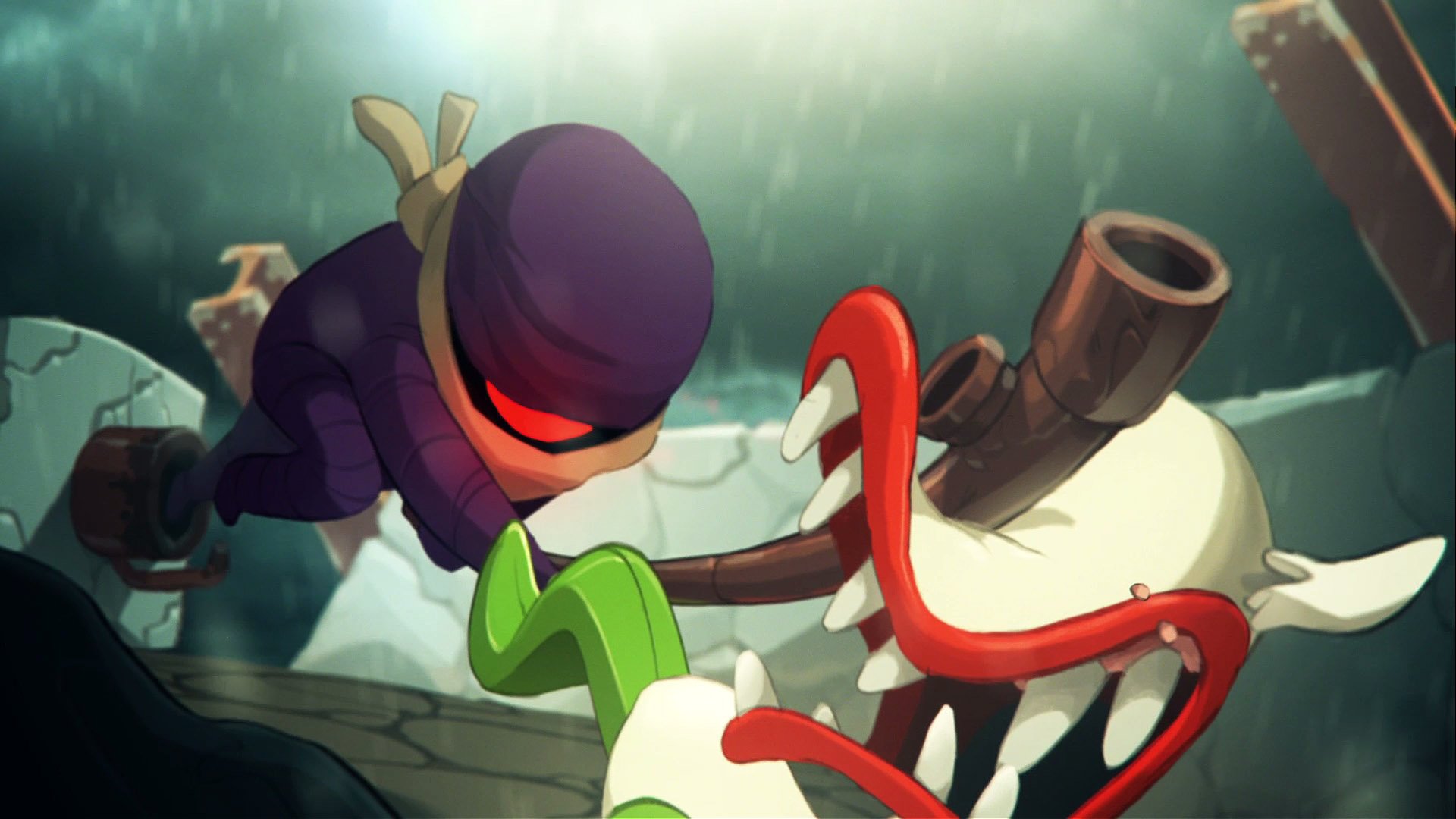 Nuclear Throne is about mutants and freaks obliterating each other in a fucked up biohazard of a world over a supposed seat on a likely meaningless throne. It’s about winning the right to lord over a dead world.

It’s about twitch reflexes, the honing and sharpening of the most mechanical and merciless of gamer reactions. That dead-eye arcade stare that comes from quickly identifying the most pressing threat and eliminating it as quickly as possible with minimal resource usage. It’s about repeating that process about a thousand times, trying to get ever so slightly better at it every time you try.

It’s about dying, quickly and cheaply. It’s about a health bar that is so fragile as to be essentially meaningless. Bullets that gouge three pips of health out of a bar of eight and don’t even have the decency to make you flicker for a second. One-hit kills from bosses. One-hit kills from mutant sewer rats. One-hit kills from cars accidentally exploding too close, the clumsy use of a plasma cannon, or getting a little too curious about a mysterious crystal. It hardly matters, most games of Nuclear Throne take anywhere between five and fifteen minutes. Another try is just a click away. 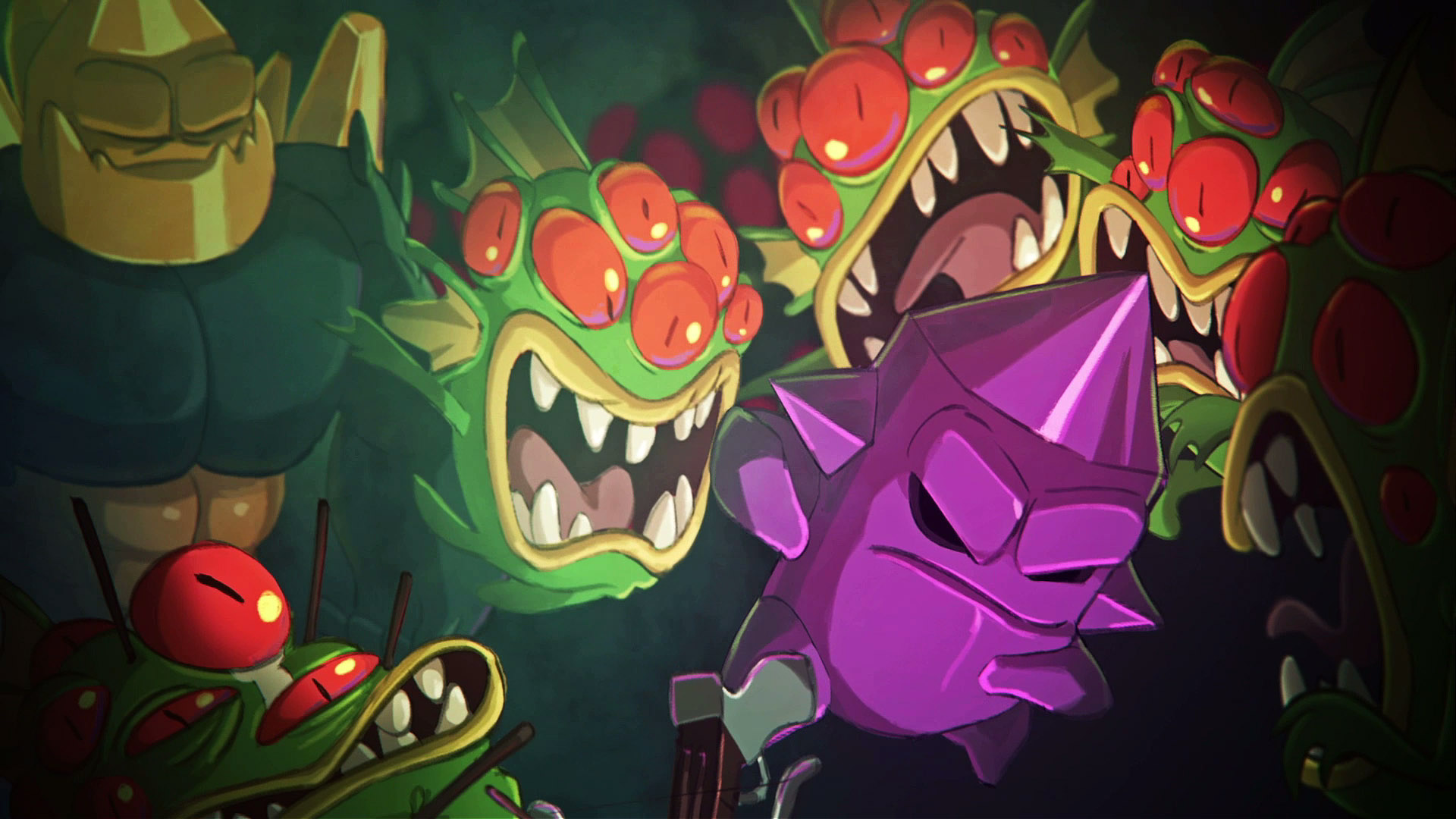 Nuclear Throne isn’t a game about learning from the mistakes of the past, it’s about doubling down on them. Fucked up the planet with nuclear hellfire and warfare? Well, guess we better slaughter each other by the dozen to fight over a fancy chair. Get killed by a random grenade? Mash that “retry” button to jump right back in and eat another one. Die immediately trying to figure out how to play as Melty, the incredibly squishy pile of walking goo? Play as him another 20 times in a row until it’s late and your eyes sting, and you know you’ll hate yourself in the morning.

To me, Nuclear Throne is the game I turn to when I’m not in the mood to learn from my mistakes, when I’d rather wallow in them. When I want to pile them on top of each other again and again until I can make myself a comfortable pile of failure to sit on. 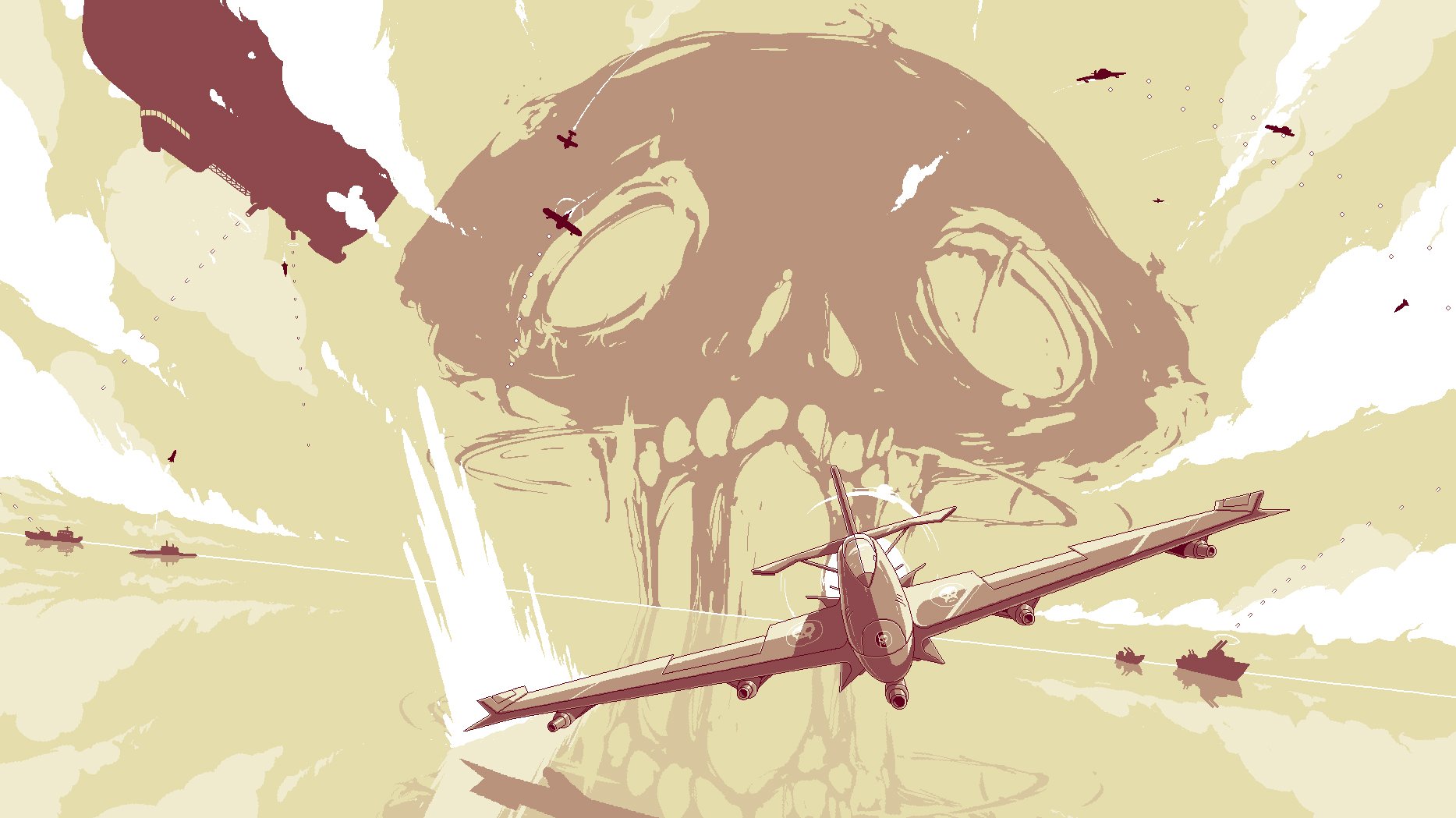 I’ve read that Luftrausers, Vlambeer’s previous game, was made while the team was angry. That the fury of having one of their other games ripped-off in the Apple marketplace and the long, bitter process of trying to resolve that issue crept its way into Luftrausers and became the black core of its angry heart. That the unrelenting aggression of both the enemies and the player (motivated by a strict score-attack combo system to keep fighting at all costs) was a result of how they felt at the time.

It’s not hard to extend the logic and imagine how those feeling influenced the rest of the game. The ultra minimalist design, the obsession with cutting out every superfluous element of the game, reveals a design team wasn’t just uninterested in niceties, but hostile to them. One of the iconic ship abilities in Luftrausers is a suicide bomb that triggers a skull-shaped nuclear explosion when the player dies, clearing out every enemy left on the screen. It’s pure schadenfreude — they might as well made the nuclear cloud a middle finger.

In many ways, Nuclear Throne seems just as angry. It’s hyper-aggressive and utterly merciless. The kind of game where you are expected to die. Failure is the default state and winning is the rare, precious exception (and all it does is toss you back into an even harder NG+). The game is hostile to the player, with disorienting screen shake accompanying every explosion, dick-bag cheap shots from off-screen enemies, monsters disguised as ammo boxes — the kind of tricks you’d expect to see in something like I Wanna Be the Guy.

But it’s also a whole lot of fun. 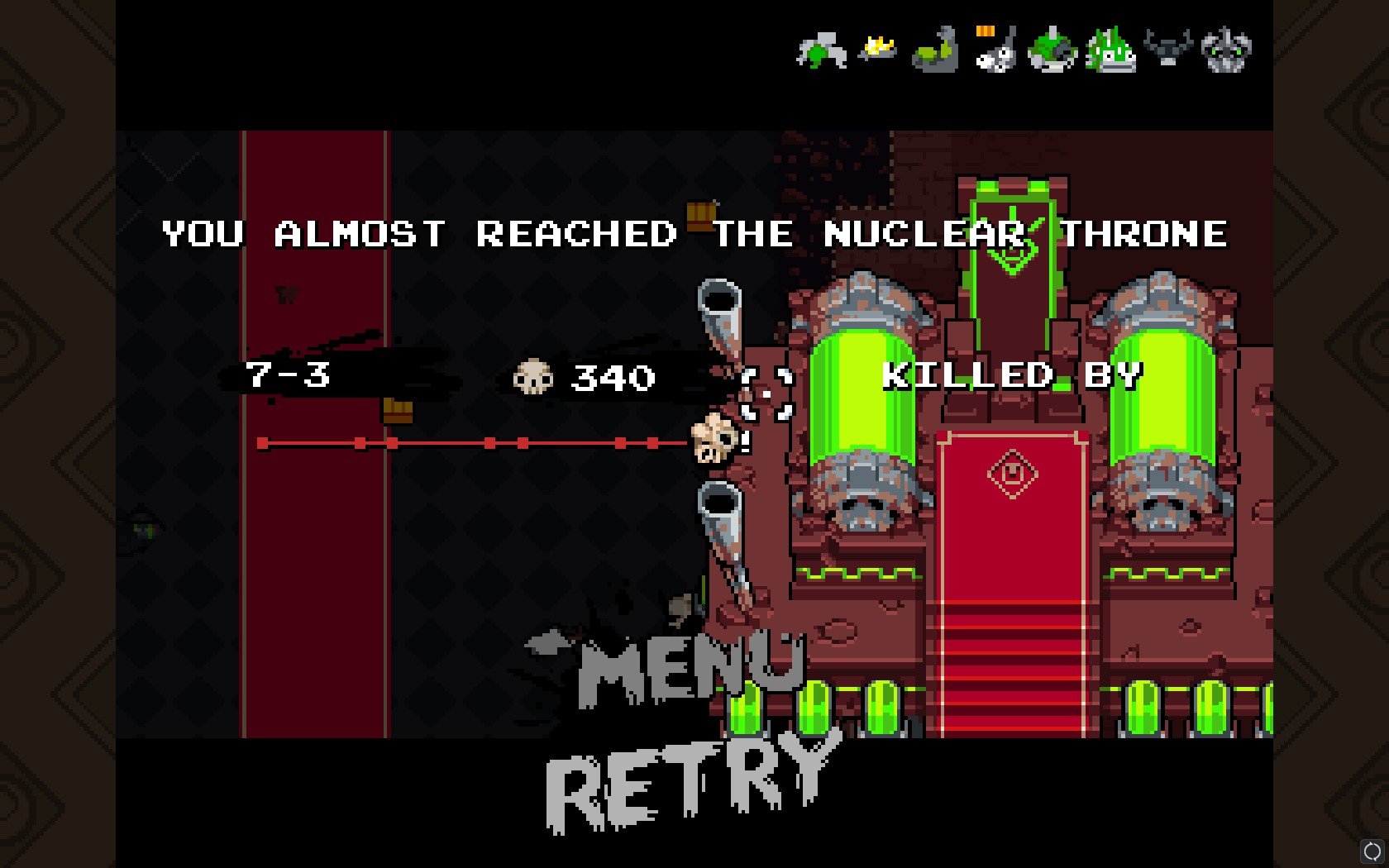 Nuclear Throne celebrates nihilism. It finds the joy in self-obliteration. Every aspect of the design speaks to a willful disregard for safety, a rejection of self-preservation. While ammo and health are precious commodities, half the weapons you can pick up are more dangerous to you than they are the enemy, and the rest gleefully waste ammunition. Suicidal choices like the disc gun with it’s bouncing buzzsaw blades that are 100% guaranteed to ricochet back at you, radiation grenades that leave dense clouds of toxic smoke for you to walk into, blood sledgehammers that gamble health for a more powerful swing — madness in a game where you’re always a hair’s breadth from death.

There is dumb shit like the triple and quad machine guns, which flood the screen with firepower whileevaporatingyour ammo reserve in the blink of an eye. Great fun for about seven seconds or so. Or Y.V’s “Brrrpt” upgrade that lets him fire a weapon four times per trigger pull combined with something like the “precision” crossbow. Completely wasteful, entirely satisfying. Nuclear Throne seems like the kind of game the War Boys from Mad Max would enjoy.

Then you have the little details. The loading screen messages that alternate between poignant and asinine, constantly pointing out how pointless and nihilistic the situation is only to laugh at it. The grotesquely cute design of the characters, little monsters you can’t help but love. Chicken, an avian-samurai so committed to carnage that she’ll keep fighting for a few seconds even after losing her head. Or my personal favorite character, the Robot, who’s special ability is that he can devour spare guns to restore health and ammo. He is a being that literally subsists on violence, but that doesn’t stop him from being cute as a button. 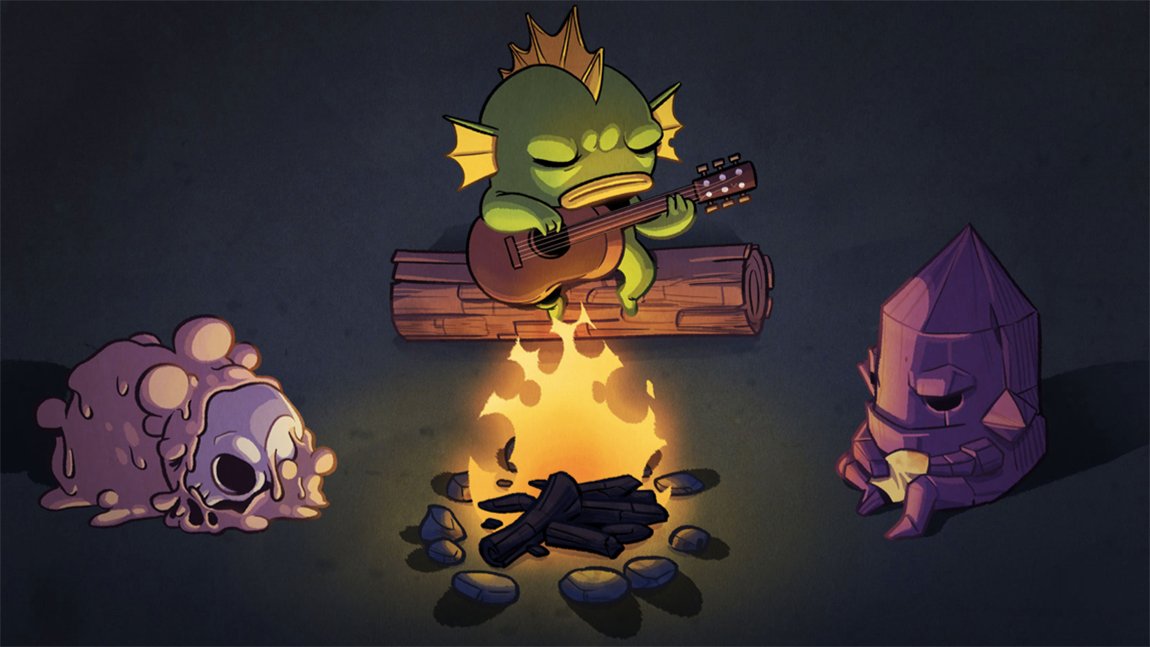 I play a lot of different games for many different reasons. There are some games that I play for the story, or the world, the FalloutsandDragon Ages of the world. I like fighting games and multiplayer first-person shooters to test my skills against other players, and MOBAs as an excuse to play with friends.

But you know what? Sometimes I’m not in the mood to go scavenge around for copper wire or perform fetch quests for peasants. Sometimes the last thing I would want to do is go online and put up with trash talking morons or try to put on a happy face for my friends.

Sometimes at the end of the day I’m tired and sad. I don’t have the energy to invest in some 80 hour RPG or the focus to deal with online bullshit. I just want to blow everything up. I want to get killed. I want to do it over and over again until I feel like all the bile and frustration of the day has been expunged.

That’s a valid reason to play games as well. As the industry moves further into hugetripleA multiplayer titles and massiveopen-world adventures, and many indies become increasingly story driven andemotionalcharged, I feel like that desire for mindless, cathartic, healing obliteration is getting lost in the shuffle. It makes me thankful for Nuclear Throne and its sweet embrace of annihilation.