Up until this past weekend, ToeJam & Earlwas a title I knew nothing about. I’ve heard of the games over the years, usually from people at GameStop romanticizing the days of their youth spent with it, but for decades it was just a weirdly named game. Who’d want to play a game as something named “ToeJam?”

Turns out, $508,000 worth of people did because that’s how much money the fourth game in the series, ToeJam & Earl: Back in the Groove,raised on Kickstarter three years ago. Now, we’re just a couple of months away from release, getting our first good look at the final product at PAX West. Far away from the bustling Washington State Convention Center, in an upstairs unit on Post Alley near the Pike Place Market, I sit down for a hands-on session with series co-creator Greg Johnson, founder of HumaNature Studios.

Anyone who grew up playing the original ToeJam & Earlwill probably feel right at home with Back in the Grooveas it’s more like that game and less so like its sequel, Panic on Funkotron. Because I’m complete unfamiliar with the franchise, wrapping my head around just what this game is takes almost the entirety of the demo session. There are six playable characters in the build and Johnson and I go with ToeJam and Earl respectively.

The objective of the game is simple: the titular duo have crash-landed on a planet and they must find the pieces of their spacecraft across 25 randomly generated floors to escape. Not every floor has a spaceship piece and it’s made clear if the floor you’re on does or does not contain one. To reach the end, players must locate the elevator on each floor while using presents they pick up along the way to stave off predators and level up. There is no melee combat in the game, but many of the presents can give players temporary weapons they can use to take out friend and foe alike.

It’s the present feature that takes me the longest to understand. I’m an expert at this point in my life on the ins-and-outs of Mystery Dungeongames, so traversing each level of this randomly generated world is no problem. For most of the early floors, I’m just shaking trees, bushes,and houses to see what happens. On one of the floors, I shake a house and out emerges Gandhiwho protects me with a sphere of flowers. Many of the trees I shake hide bowling balls just waiting to fall on my head and sap me of my health. 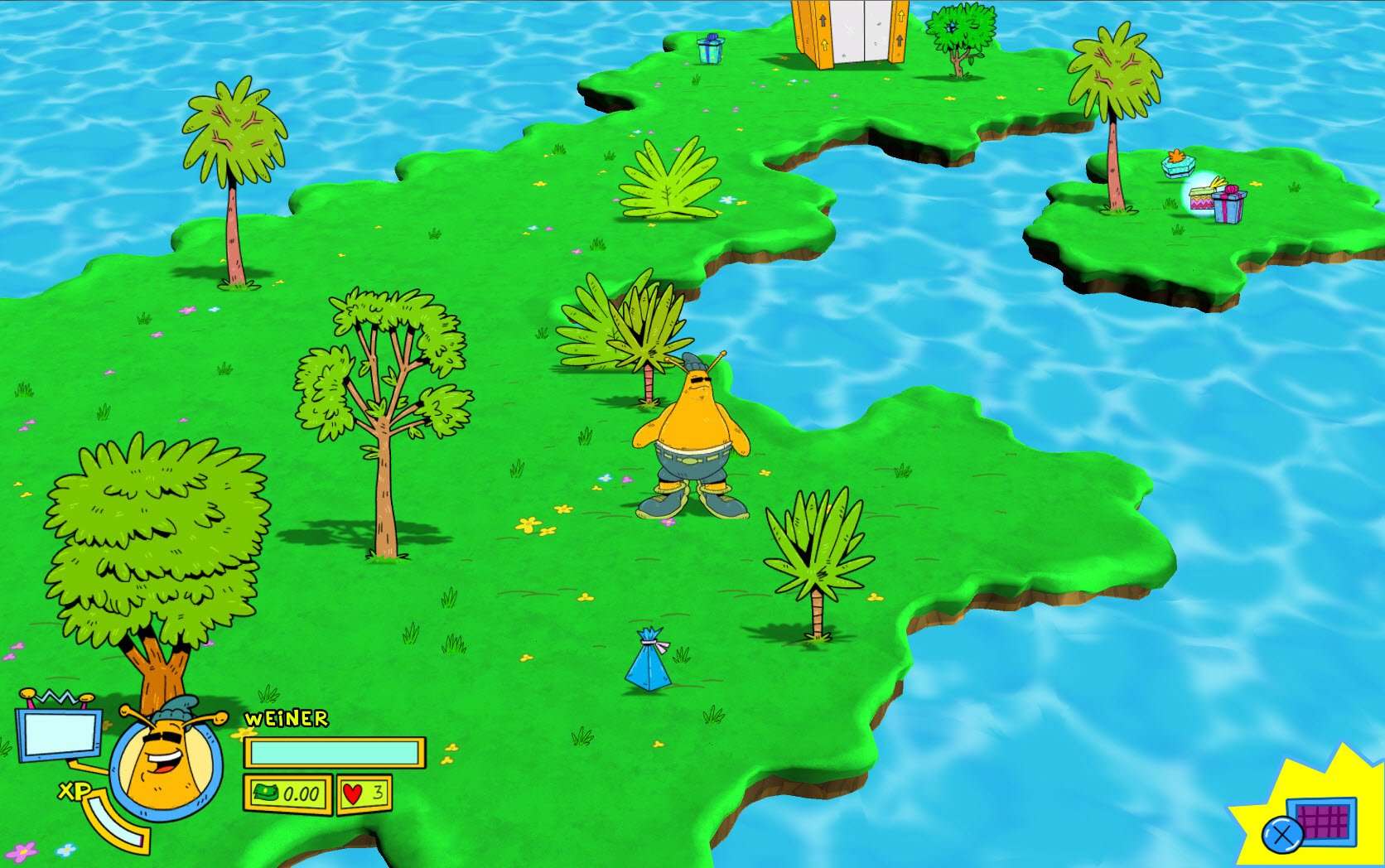 When I finally do get around to opening those presents I find, the depth of the game starts to present itself. There are dozens of presents to unlock and some can fundamentally change the journey across each floor. There is a present that gives me stealth abilities, that lets me easily find my partner, that helps me locate the exit, and one that rain down tomatoes on the stage around me, eliminating enemies and those who are there to help me.

The further we go into the dungeon, the crazier the situations become. On one of the floors, I come across a hula dancer whose hips put me in a trance. On another floor, a crazed alien fanatic chases me around. Not long after that, I kill Santa Claus and unlock a present normally found later in the dungeon. The entire experience is bizarre, with secret switches, parking meters, dance-offs, hidden side-scrolling auto-run stages, and more. No two floors are ever the same and the more eccentric the game becomes, the more I start to dig it.

The madcap nature of Back in the Grooveis perfectly accented with the art direction. Characters, locations, and objects feature a strikingly rich 90s vibe to themlike they’re all assets picked out of an episode of What a Cartoon!One extra bit of detail I love is with how the floors are presented. When I venture up another level in the dungeon, I can still pretty clearly see the previous floor below me. In one instance, Johnson and I are on separate floors after a rocket skate mishap. As I try to find my way back to the elevator, we can see my ToeJam on the floor below his Earl. When their paths cross, the two characters say ‘sup to one another. It’s a great touch and really adds to this feeling that this game is just two bud hanging out on a foreign planet. 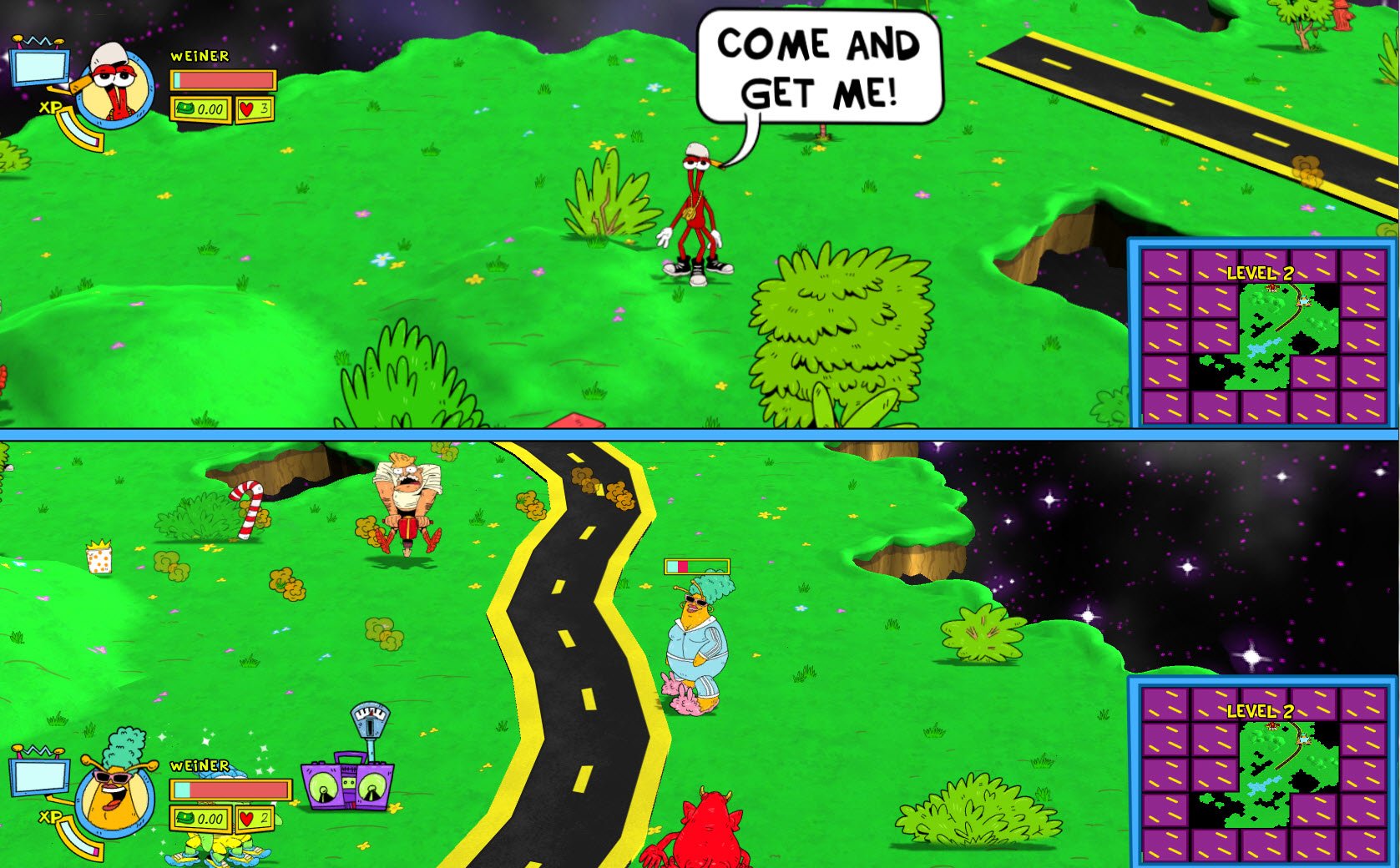 This dual level greeting also causes a dip in the framerate. Throughout our session together, Johnson stops occasionally to make note of any bugs he finds and there are more than a handful he jots down by the time I hand him my controller. One of the more notable bugs occurs during a music mini-game. While the controls for this section work just fine, the sound does not, muting the experience. There are other bugs, but none of them are big enough to phase me. At the end of my session, as I go to leave, I think this game is absolutely a title for me. But as I walk to my next appointment, I start to question that thought.

ToeJam & Earl: Back in the Grooveis one of those games that’s difficult to recommend or to try and hype people up about because I’m not exactly sure how I feel about it. A laid-back, ’90s-chicroguelikedungeon crawler might have appealed to me when I was still in single digits, but I’m not sure the 33-year-old me will be able to enjoy more than a single trip through this strange land. I certainly find the PAX demo to be amusing with a level of zaniness not seen in any other game at the show. I’m just unclear exactly how much mileage I’ll get out of this chillaxed adventure.

I see Johnson the next day when I return to Post Alley for another appointment. He has a bit of a thousand-yard stare going on as he casually brings up he found more bugs in the PAX build. With a release date planned for late Fall/early Winter, HumaNature Studios has its work cut out for it.