Heigh-ho! It’s off to war we go

Back at E3 2015, I got a special sneak peek at the upcoming Total War: Warhammer. The pre-alpha footage we were shown featured an intense battle between the Empire and Greenskins, and each side brought their largest weapons and fiercest foes to the brawl. From griffon riders to the shaman’s summon giant arachnids,Total War is taking advantage of the new setting. With decades of lore to pull from, Creative Assembly aims to move away from the series’ historical settings to the ridiculously epic high-fantasy genre. But that doesn’t mean the tried-and-true gameplay that focuses on empire creation and intense battles has faltered. In many ways, Warhammer is looking to become the most refined and detailed Total War yet.

In order to give people an idea of the scope they have in mind for their upcoming title, the developers invited Destructoid out to go hands-on with Total War: Warhammer, in addition to experiencing the first gameplay with the Dwarven faction. Working closely with Game Workshops, the developers had countless texts and data to work from in order to make a title worthy of both brands.

The developers have been keeping things pretty close to the vest when it comes Warhammer. While we’ve already seen the Empire and Greenskin armies in action, they’ve been very hesitant to share any details about the Dwarf and Vampire factions. As each army will have its own unique settings, politics, and overall feel from one another, Creative Assembly wanted to make sure it nailed its approach before showing it off to the world.

Our session focused primarily on one of the earlier skirmishes in the Dwarven campaign. During the Ambush at the Thunderfalls Pass, the faction’s underground networks have been breached by the Greenskins, and it must drive them out in order to keep its most secure and valuable asset in Dwarf hands. Unlike the other Total War titles, Warhammer has deeper ties to a general narrative during the campaigns. While you’ll still have plenty of leeway into how you build the factions up, there will be several moments in the faction’s plot that will affects several key characters from Warhammer lore, but will also change the course of your campaign.

For the Dwarven faction, a great empire lies underground and they’ve built a network of tunnels to travel vast distances, transport supplies, and surprise enemies forces from beneath the earth. From underground skirmishes, to using the tunnels for trade during nation-building, the burly and stout faction will use the subterranean realm to strengthen its empire and debilitate foes. But given how valuable of a resource these tunnels have been to the Dwarfs, it’s no surprise the other factions would want to take it for themselves. 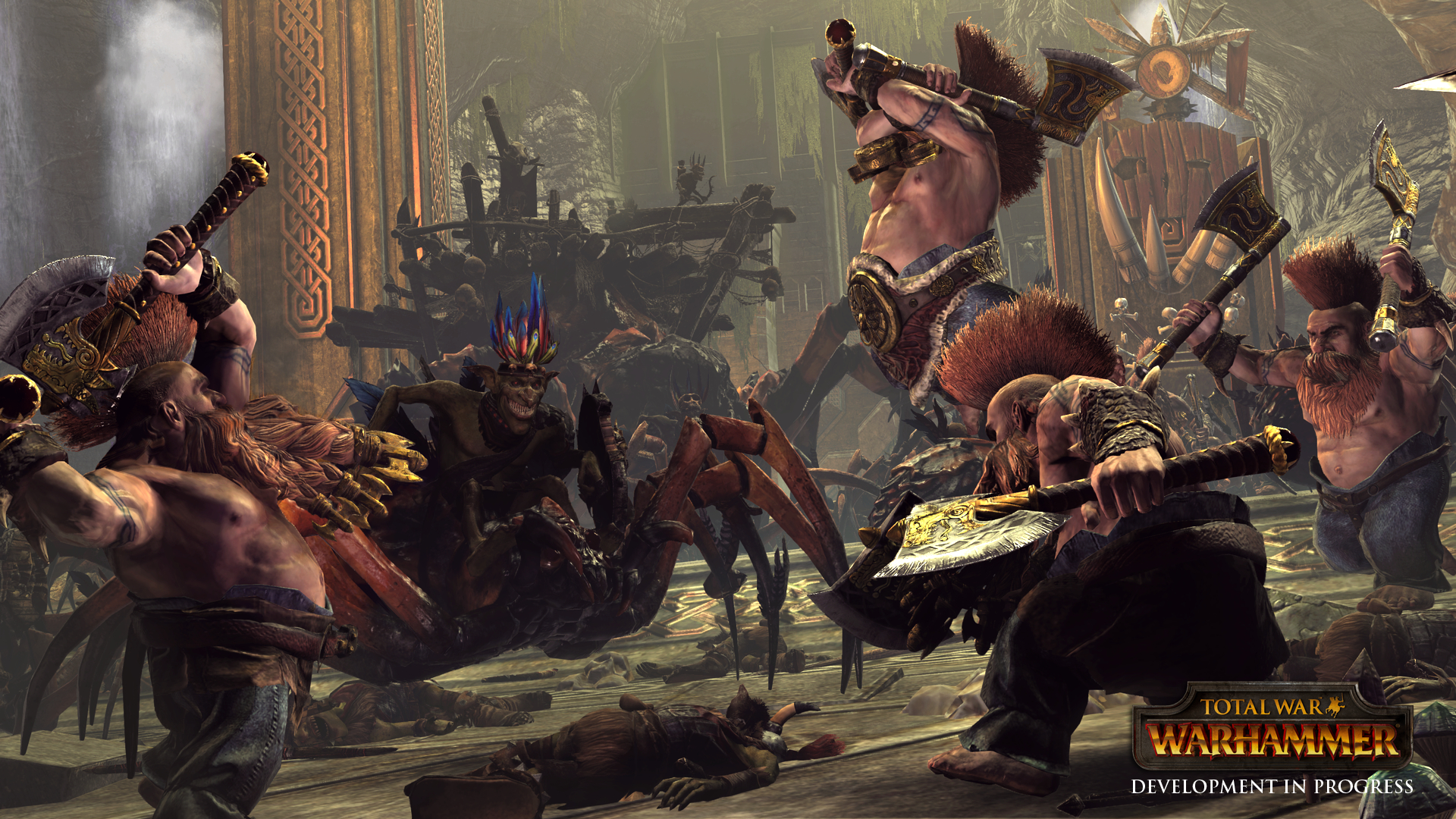 The Ambush at Thunderfalls Pass served as a great opener to not only the new field of war, but also to see how Warhammer made the transition to Total War. Despite the tonal shift and massive change in setting, battles should be quite familiar to those who’ve sunk hundreds of hours into the RTS series. Players control various types of ranged and melee units to engage the enemy and complete objectives. Along with a brand new mechanic called the Grudge system, which adds dynamic challenges based on how effective your attacks and strategies are against the opposition, the battle mechanics have evolved in this entry. With the fantasy aesthetic in full swing, the developers have gotten creative in implementing the classicWarhammerarchetypes and lore into theTotal Wargameplay.

Each faction possesses its own unique Hero classes, who are not only important to the faction’s narrative, but also provide special skills and abilities to battles — and many hardcore Warhammer fans will undoubtedly recognize a few of them. During this battle, the Dwarven units were accompanied by High King Thorgrim Grudgebearer, the ruler of the Dwarven capital city, who wielded a enchanted tome that allowed him to buff nearby units. Another Hero character with the army was Thane, a melee champion that was at his best when rushing into the thick of it. In addition to the large number of units, the hero characters add a lot of nuance to battles, as their special skills can seriously make or break a battle at critical moments.

During one moment, a remote melee unit of Slayers was getting pummeled by Greenskins, but moving Thane close enough to their position allowed the Slayers to become imbued with his special melee buff which boosted their abilities and slaughtered their foes. It’s important to remember that each faction always has ways to deal with the opposition, but you’ll have to stay on your toes in order to keep one step ahead of the enemy. I was fortunate enough to test out the same map on two separate difficulty modes, Normal and Hard, and each skirmish field will have varying difficulties to spice things up. Hard mode makes your opposition far more aggressive and cunning, which will be a welcome option for those who want their battle knowledge to be put to the test. 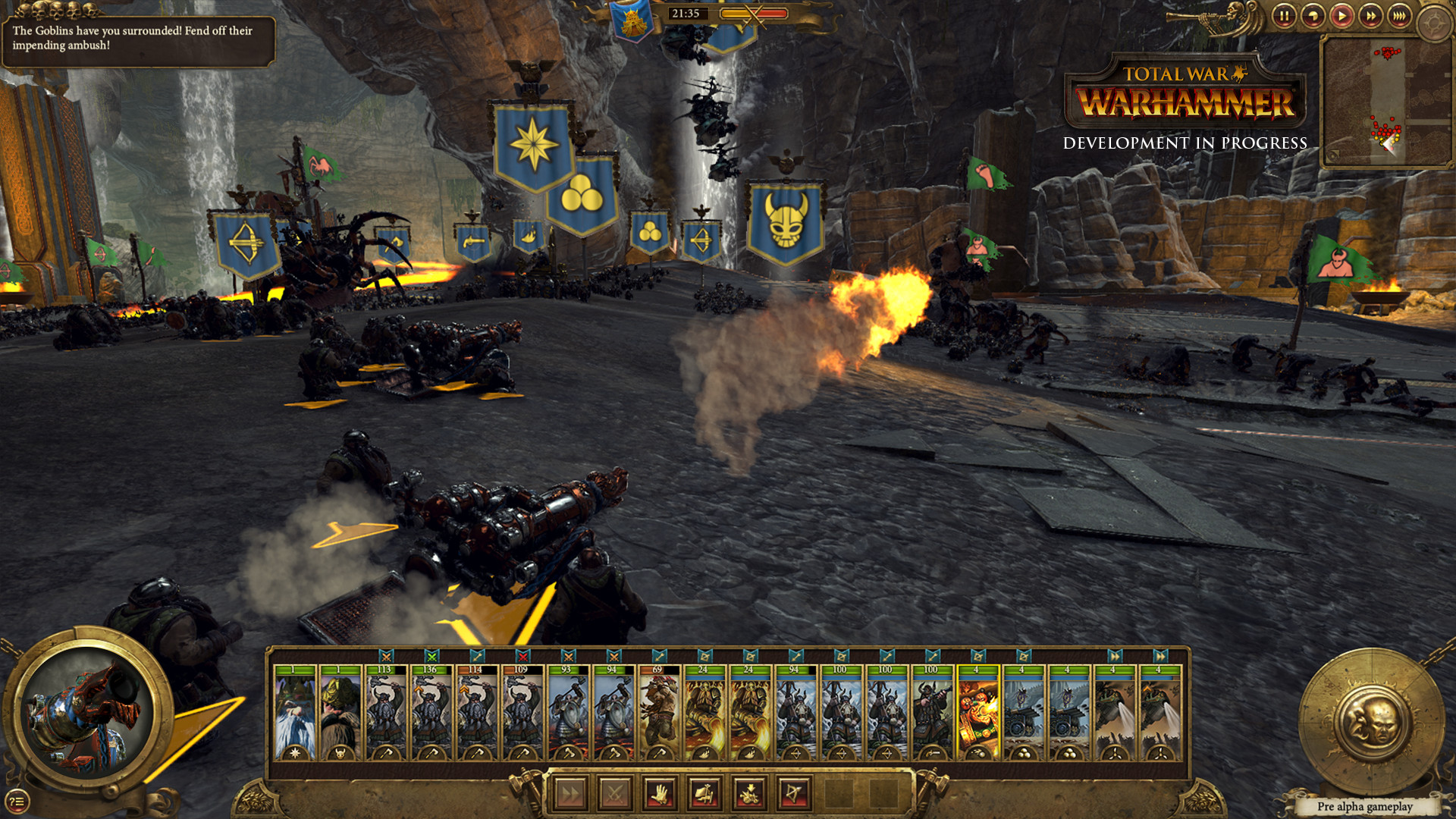 But of course, the thing that interests Warhammerfans the most are the faction characters. During this skirmish, we were given access to a number of unique classes from the Dwarven faction, with many more yet to be unveiled. Just as you would expect, each unit has its own special strengths and weaknesses, and they’re at their best when combining efforts with different classes. From Dwarf Warriors, Longbeards with Great Weapons, Slayers, Iron Drakes (flamethrower units), Quarrelers and Thunderers (both ranged), Siege Weapons, and even Gyrocopters — the Dwarfs’ knowledge of tech and terrain are their greatest asset, and it totally comes out in the combat style and strategies they employ.

I was impressed with the rich detail and visuals during the battle. With the awe-inspiring setting, and the detailed characters and animations, I had a lot of fun just watching the action unfold. Just like in previous titles, you can change camera and get much closer to the action with cinematic camera angles and wide-shots of the battlefield. It can’t be stated enough at how much of a looker this game is. I spent a good amount of time just staring at the detail of Thorgrim’s character model, which showed his throne being carried Dwarf servants. The developers nailed the visual aesthetic, and when Warhammer fans aren’t winning battles, they’ll be geeking out over the details of the world and its characters in-game.

As the members of Creative Assembly stated during our session, Total War: Warhammer still has a ways to go during its development, but it’s looking sharp at this point. The action was fluid, and the visuals were very impressive. The high-fantasy setting shines within the Total War brand, and with the core gameplay of the nation building still yet to be seen, more of the Warhammer universe will become unveiled in the coming months. I’m still looking forward to the day they reveal the Vampire faction, which the devs claim are very different from the others, but until then, the Dwarfs have got plenty of firepower and brute force to stand up against whatever comes their way.