Konami’s output on the Famicom was simply amazing. While we certainly got some good games on this side of the pond, such as Castlevania and Contra, there were a plethora of great titles that stayed in their homeland.

They were once a playful company with a cohesive catalog. Many games in their early days made reference to their other releases, and they even pioneered the idea of crossover titles with Konami Wai Wai World. I really, badly miss those days that I was too young and also in the wrong country to really experience. Creativity was rampant among those titles, and it wound up giving us some really memorable concepts. 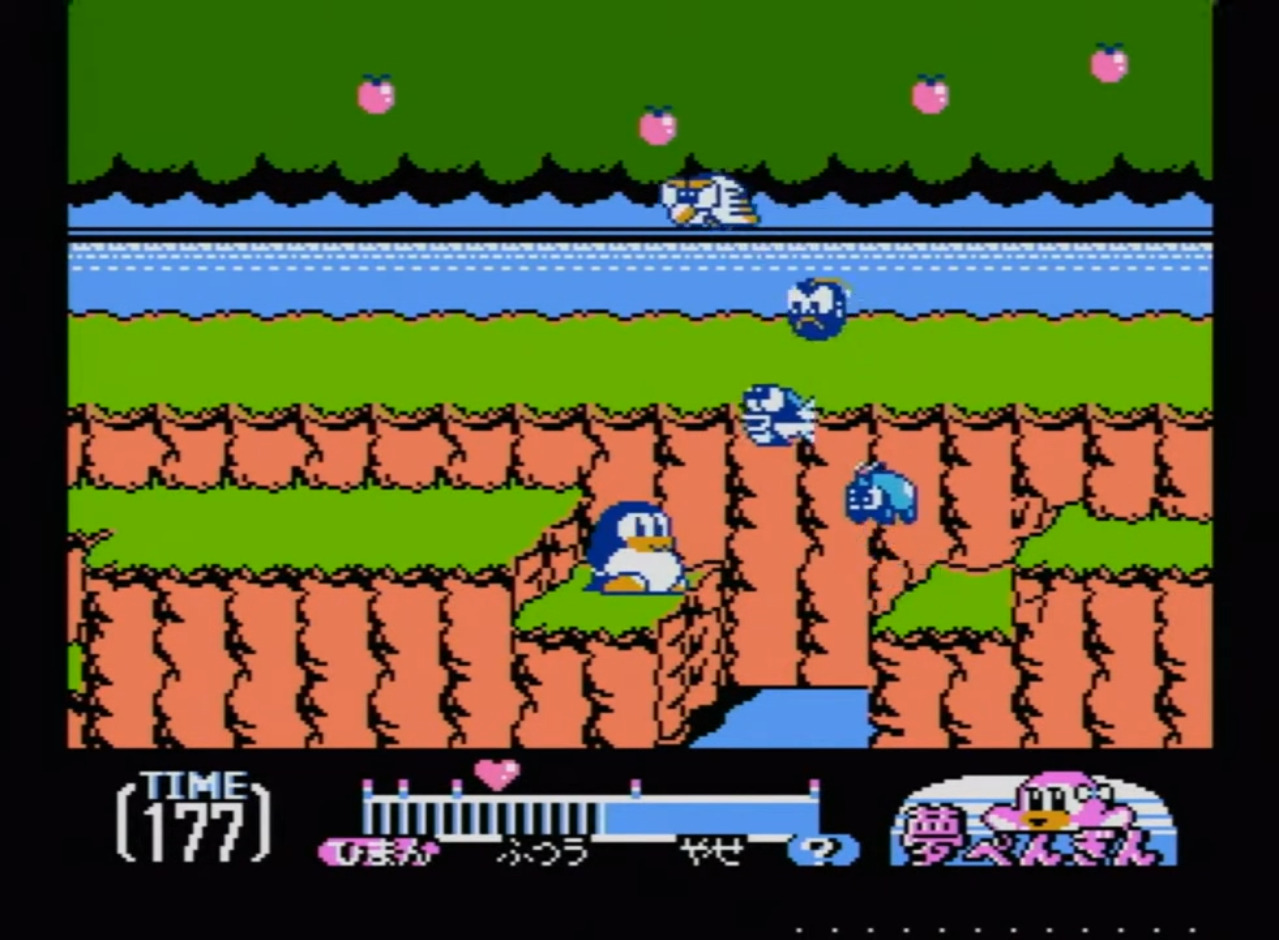 One of these games was a loosely connected series that revolved around a penguin named Penta, sometimes known as Pentarou (though whether the characters are indeed the same is a little murky). Penta was a weird entity that starred in a bleak anime where he suffered from PTSD caused by a stint in the Vietnam War. He also advertised for Suntory Beer, so add alcoholism to the list of his personal demons. Perhaps the lowest part of his career, however, was when he dealt with body image issues and an abusive relationship in 1991’s Yume Penguin Monogatari.

Translated to Dream Penguin Story, Yume Penguin Monogatari has Penta overeating, assumedly to deal with the crushing emotional issues he has. His girlfriend, Penko, who, as it turns out, was dating him for his looks and not his personality, gets fed up with his massive weight gain and leaves him for another penguin. Penta, having no self-respect, then sets off to trim his waist and win back his love. 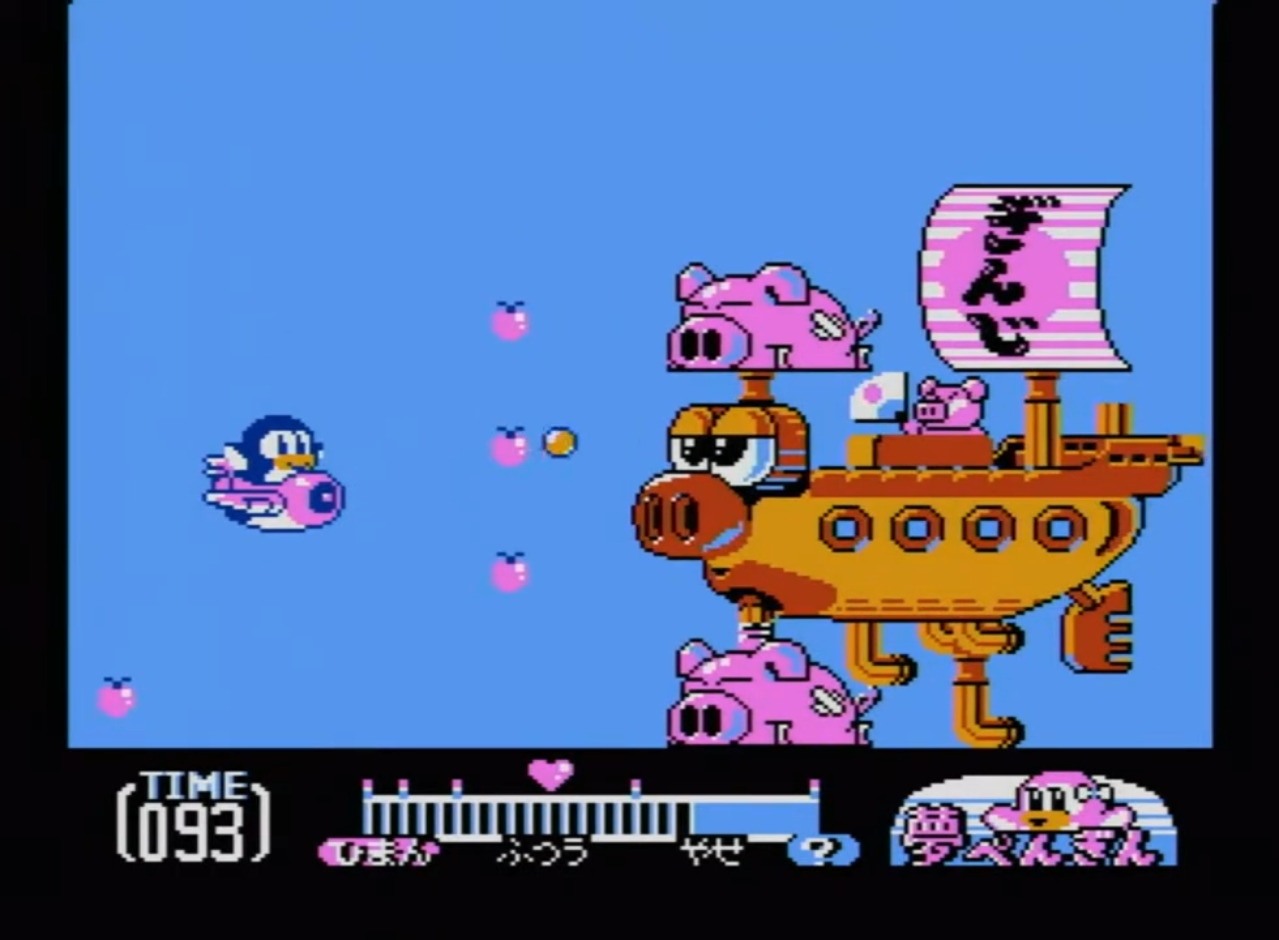 Food has often been used as a way of healing or powering up gaming protagonists, but in Yume Penguin Monogatari, you must avoid it at all costs. Prominently displayed on the HUD is Penta’s current weight, and your goal is to finish each level with your waistline slimmed down past a given threshold. Food adds more junk to the trunk, but instead of exercising, you become lean by collecting as many bottles of diet drink as you can.

Gameplay alternates between sidescroller platforming sections and horizontal shoot-’em-ups. Neither mode is particularly deep, but they are colorful and offer simple tastes of the genre. Most levels are capped off with a boss battle, which is usually pretty formulaic, but having to work off the last bit of weight while fighting a big baddy is kind of entertaining.

Yume Penguin Monogatari may be the sort of game that is more fun to discuss than to actually play. It only lasts around 6 levels, and it’s not too taxing to make it through them. Aside from the core weight-loss mechanic, the gameplay isn’t anything special as far as platformers go. Colorful, yes. Memorable, yes. Inventive, not really. 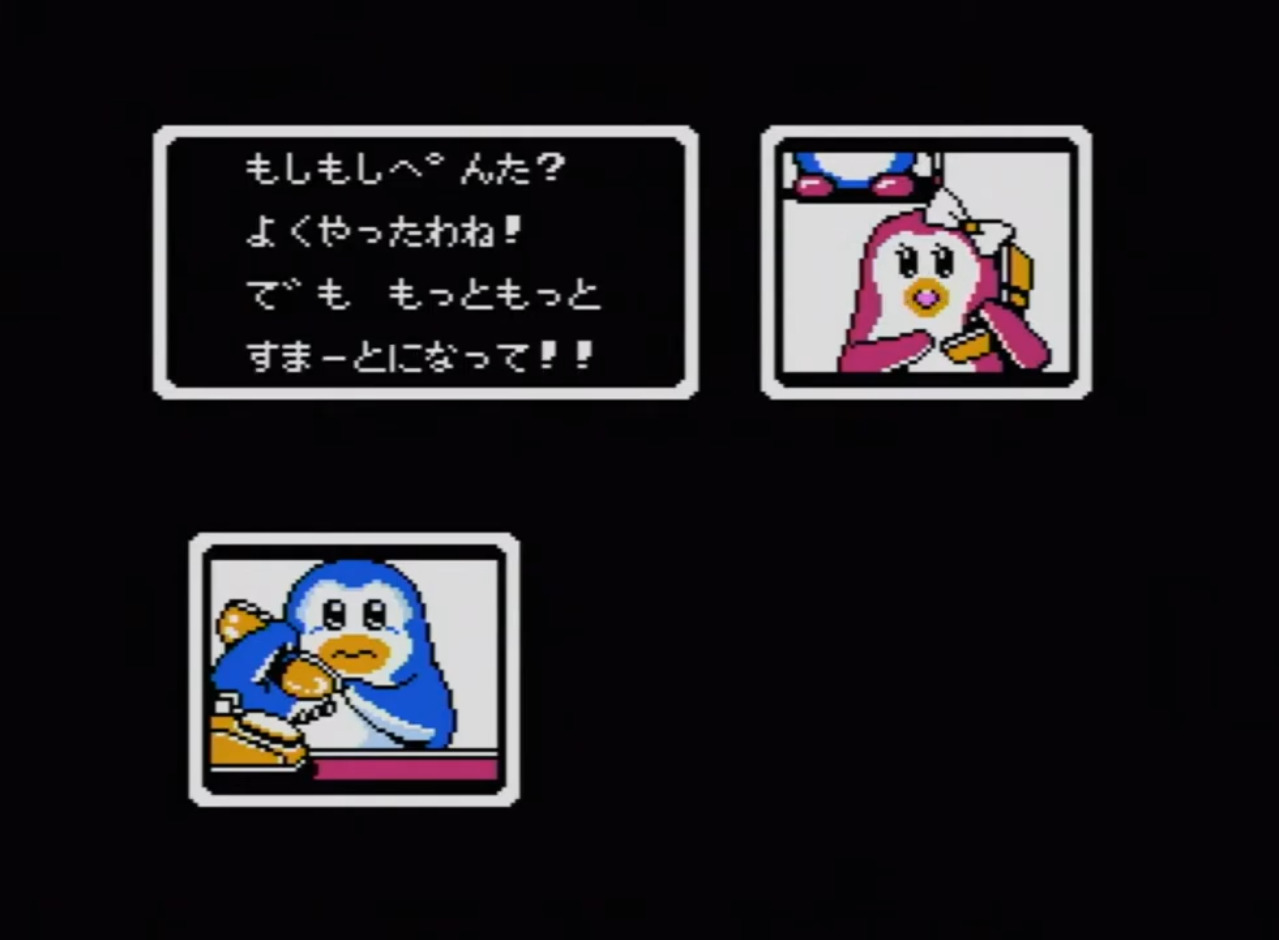 Even with that said, it’s a fun little snack of a game. Something bright and lighthearted to chew on for a moment before moving onto something new. Its premise makes it stand out because, after all, you’d be hard-pressed to find another game in which you help a penguin lose weight. Really, though, Penta should probably consider working on his self-esteem rather than just hurrying to get back with his terrible girlfriend.

Much to my shock and dismay, it would appear that Yume Penguin Monogatari was never re-released on another platform. Unless you count the I-Revo online platform in 2006, but why would you? I feel the likelihood of it finding a new home at this point is pretty dim. The subject matter has gotten a little touchy, and Konami hates its fans and wants to bury its history. At this point, I’d be happy if we just got to see Parodius again.

Unfortunately, all the cutscenes are fully in Japanese. You can bypass them and just enjoy the gameplay, but you will miss out on Penta’s ex-girlfriend sassing him about his weight problems. Luckily, there are fan translations out there that lets you listen in on this toxic relationship.