Grow Up, due for release today?

Ubisoft’s E3 conference is only a few hours away, but that’s more than enough time for a few good ol’ fashioned leaks to come in.

According to the PEGI ratings board, Ubisoft has had a title called Grow Up rated for PlayStation 4, Xbox One and PC. Interestingly, the listed release date is today: June 13. 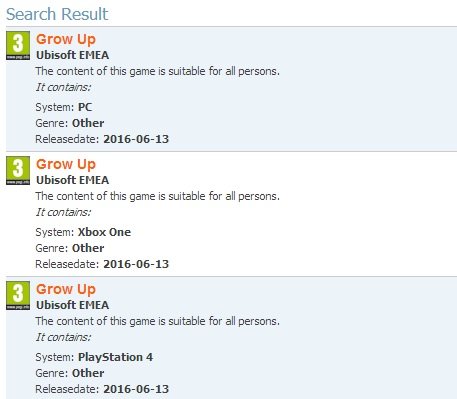 Judging by the name and the rating given (a three, which means the game is “suitable for all persons”), there’s a good chance this might be a follow-up to 2015’s colourful and lovelyGrow Home. It’s pure speculation at the moment, but a child-friendly game by Ubisoft with “Grow” in the title is either Grow Home 2 or a pretty bad branding blunder.

Is it possible that Ubisoft is gearing up to announce and release whateverGrow Upis at the same time? We’ll find out later today when it takes to the E3 stage at 1PM PDT/9PM BST.