We’ve waited nearly 10 years for Nintendo to officially localizeMother 3. The wait has been so long, it’s started to seem like an impossibility. However, due to somerumorsover the past week, it’s beginning to feel more and more likely that a western release might finally be happening. Especially when you factor in EarthBound and EarthBound Beginnings‘ recent arrivalthe Wii U eShop, Lucas joiningSuper Smash Bros.roster, and the 10th anniversary of Mother 3‘s Japanese release fast approaching, it has us wondering if this might this actually be the year.

Of course, with any localization (especially coming from Nintendo), many fans are worried about the possibility of censorship. Mother 3 is one of the greatest video games I’ve ever played, and I’d hate to see too much of its content changed, but due to certain events and characters featured in the game, that seems inevitable.

So, what would Nintendo change during the localization process of Mother 3? Well, let’s first take a look at EarthBound, a game that received quite a few notable changes before it made its way out of Japan. This might give us a clue as to the types of things Nintendo will be looking for in Mother 3.

Ignoring the many revisions to text and dialogue for now, EarthBound featured several sprites and background visuals that were altered for various reasons. The major ones include:

More changes can be found over at Legends of Localization, a handy resource compiled by Clyde Mandelin of Starmen.net.

So, to break it down, with EarthBound, Nintendo was specifically interested in nixing or mitigating any references to nudity, sexuality, drugs, alcohol, violence, material that might lead to a lawsuit, and obscure cultural references. SinceMother 3 happens to contain a few of those things too, here are some of the changes I expect Nintendo might make if (*ahem* when) Mother 3 finally comes to western shores.

First off, a few name changes are probably in order. It’s safe to assume that the game will be called EarthBound 2, or some other variation on theEarthBound name, rather than Mother 3. With the originalMotherbeing changed to EarthBound Beginningsfor its western release (I still wish Nintendo stuck with”EarthBound Zero!”), this would come as little surprise.

There are also a few character and location names that might need to be reconsidered. Specifically: Kumatora, Hinawa, Club Titiboo, Osohe Castle, and DCMC. Of course, it’s important to note Super Smash Bros. Brawl did use the names Kumatora and Hinawa on stickers, so they would probably stay the same — although I honestly wouldn’t mind Hinawa’s name being changed to correspond with her husband’s name, Flint. “Hinawa” refers to a matchlock gun, similar to a flintlock gun, and considering the names of with neighbors, Lighter and Fuel, I’ve always wondered why Hinawa wasn’t changed to something more consistent. “Match” would be a weird name, but I’m confident a localization team could come up with something suitable to keep with the theme. 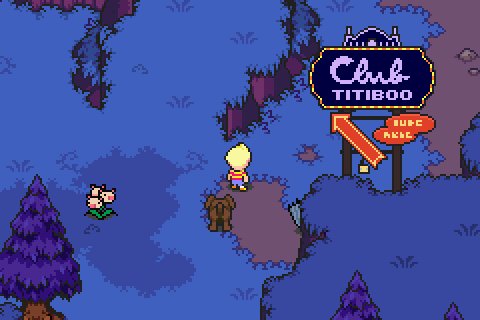 As for the others, I’m sure Club Titiboo could be seen as potentially offensive (heh, Titiboo), Osohe Castle is a little hard to pronounce, and the band name DCMC might be too similar to ACDC. They already re-colored the Runaway Five to look less like the Blues Brothers, so who knows what else they might change, but I hope they leave it as is. I also expect we won’t see an enemy called the Gently Weeping Guitar for similar reasons, even though it’s a great name!

Now onto the bigger stuff. Whenever the topic of Mother 3‘s localization comes up, fans point to a handful of scenes and characters as reasons why it will never see the light of day outside of Japan. 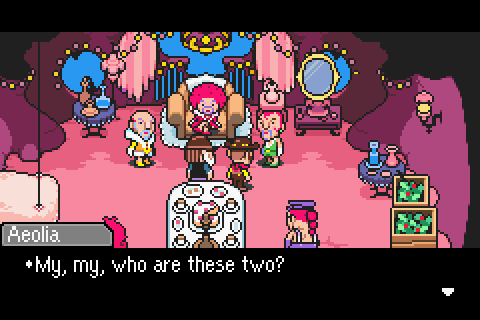 For starters, we have the Magypsies. These wonderful characters are technically not human and have transcended gender. Their appearances resemble those of stereotypical drag queens, complete with dresses, makeup, and facial hair. They even give Lucas and friends mementos comprised of razors and lipstick. The Magypsies are some of my favorite characters in the game, but given their depictions, it would be no surprise if Nintendo thought they were too controversial for a western audience. I could see Nintendo changing their outfits, mannerisms, removing any references to gender, or choosing one specific gender and sticking with it. However, I sincerely hope the Magypsies would be left unchanged. I think they’re perfect just the way they are.

There’s a specific moment involving a Magypsy named Ionia that I can almost guarantee would be changed, though. The scene in question occurs in a hot spring, when Ionia teaches Lucas how to awaken his PSI powers for the first time. The fan translation makes it a bit unclear what is actually happening, and it’s probably just as ambiguous in the original Japanese text. Basically, Ionia (who admits to being naked in the hot spring) turns Lucas around as the screen fades to black. We then hear Ionia saying, “Don’t struggle! Just endure it for a little bit!” After a moment, the screen opens back up to Lucas with his head under the water and Ionia standing behind him. And suddenly, Lucas has awoken to his latent PSI abilities.

Now, I’ll admit this scene has always left me feeling rather icky. It’s more than likely that the scene was meant to be a sort of “baptism,” with Lucas keeping his head under the hot water until the stress and pain forced his mental powers to surface. But it’s definitely not made clear, and it’s easy to see how it could be interpreted in a more sinister, suggestive way. This is actually one change I really hope Nintendo does decide to make, and it would be very easy to do. Simply add a bit of text when the screen goes dark to make it clear what’s actually going on, or better yet, don’t have the screen go dark at all so that we can plainly see what’s happening. Problem solved. 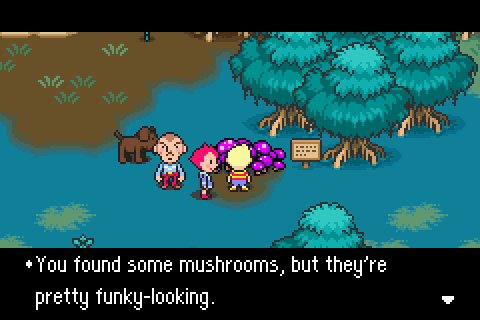 Aside from the Magypsies, the other big moment occurs in the jungles of Tanetane Island, where Lucas and friends consume some suspicious-looking mushrooms and end up with some seriously psychedelic hallucinations. With Nintendo’s insistence on removing references to drugs and alcohol in EarthBound, it’s no wonder why fans would be skeptical of this scene. Personally, I honestly don’t think this part of the game is too problematic. They’re eating the mushrooms to survive, rather than for recreational purposes, and they have to deal with the consequences. It’s meant to be humorous.

However, it’s possible Nintendo doesn’t not view this issue the same way and might decide to alter it, but how anyone’s best guess. I think it’s likely the mushroom sprite could be changed to something else, perhaps a pool of liquid or a food that causes dehydration, some kind of creature that uses hypnosis, or whatever other creative solution localization editors can come up with. Then just rewrite the text and remove any potential drug references, and Nintendo is in the clear. If they do decide to keep the shrooms though, it would certainly be ideal. It’s one of my favorite moments in the story, after all!

Staying consistent with the removal of drugs and alcohol, they might also decide to remove the wine-drinking ghost in Osohe Castle. They could also just make a point of having the ghost call it “juice” or something, kind of like the guy in EarthBound who calls his drink a cappuccino when it’s obviously a mug of beer. Watching the wine flow through the ghost’s body and splash onto the ground is always hilarious, so I hope they keep him.

Next up is the issue of violence. Ignoring the final boss fight (which better not change, or so help me, Nintendo!), there are two questionable moments: the campfire scene and the chapter with Salsa and Fassad. The former is one of the most powerful moments in the story and it would be a huge shame to see Nintendo cut any of it out. But Flint straight up smacks a dude in the gut with a piece of wood and whacks another guy across the face with it before getting clubbed in the back of the head with a huge piece of lumber. If Nintendo is still concerned about the violence in EarthBound, then it’s possible some parts of this scene could be edited.

As for Salsa and Fassad, there’s the whole issue of animal cruelty. But seeing as how Salsa eventually gets revenge on both Fassad and the device he uses to electrocute the poor monkey, hopefully none of that will have to be altered.

Last, but certainly not least, we have the Oxygen Supply Machines of the Sea Floor Dungeon. These machines were made to resemble mermen with luscious lips, and in order to get oxygen from them, one must give them a nice big smooch. So, basically, we have a young boy, a woman, a man, and a dog making out with mermen in order to stay alive under water. Now, I’m of the opinion that the Oxygen Supply Machines are too ridiculous and hilarious to be seen as sexually obscene, but it’s entirely possible Nintendo feels differently. I sure hope the company would keep them, though, because I love those guys. The Sea Floor Dungeon just wouldn’t be the same without them.

Oh yeah, and there’s also the scene where we see Lucas’s butt. Are butts okay, Nintendo? It’s a funny moment, but I could take it or leave it.

Other than that, I’m sure we’d see some new dialogue, updated enemy and item names, and many other changes to the text to make it stand out from the fan translation. I know the creators of the fan translation offered to let Nintendo use their work for free, but I highly doubt Nintendo would take them up on that offer. And that’s fine! I’m excited to see what Nintendo’s localization experts come up with, and if I don’t like it as much, I can always go back and play the fan-made version.

Those are the biggest changes I expect we might see if and when Nintendo finally localizes Mother 3. A few of them I would honestly be okay with, but some others would be severely disappointing. Of course, we’ll just have to wait and see what happens. I’ll be happy as long as we actually get the game. Anything is better than nothing, and I say we’ve waited long enough.