When it comes to competitive multiplayer games, we all have our favorite characters and classes. In this series, I’m putting some of mine under the microscope to see what makes them tick, how they fit into their games, and ultimately why I like them!

If you told me a few years ago that the fighting game I’d be spending the most time with in 2017 was Mortal Kombat X, I wouldn’t have believed you. If you told me I’d also be spending that time with not only one of the freshly introduced new characters, but one of the most usual among them, I would have laughed right in your face. But here I am, still playing MKX, and still playing Blood God Kotal Kahn of all characters.

Picking a character is a personal choice in any fighting game, but in MKX picking a main is even more specific and complicated due to its variation system. There are essentially three versions of each character to choose from, and while these variations share the same basic moves, they each provide their own little tweaks and wrinkles to make them unique. One variation will be more focused on rush-down, another might offer easier combos but fewer options and so forth.

For many players, this means picking a character and spending time learning each variation so you can swap between them to better adapt to specific match-ups. For others, this means a deep dive into ONE variation, a long, hard road to mastery using a single character. A blood oath sworn to a single path.

I don’t know exactly how or why it happened, but Blood God Kotal Kahn became that character for me. 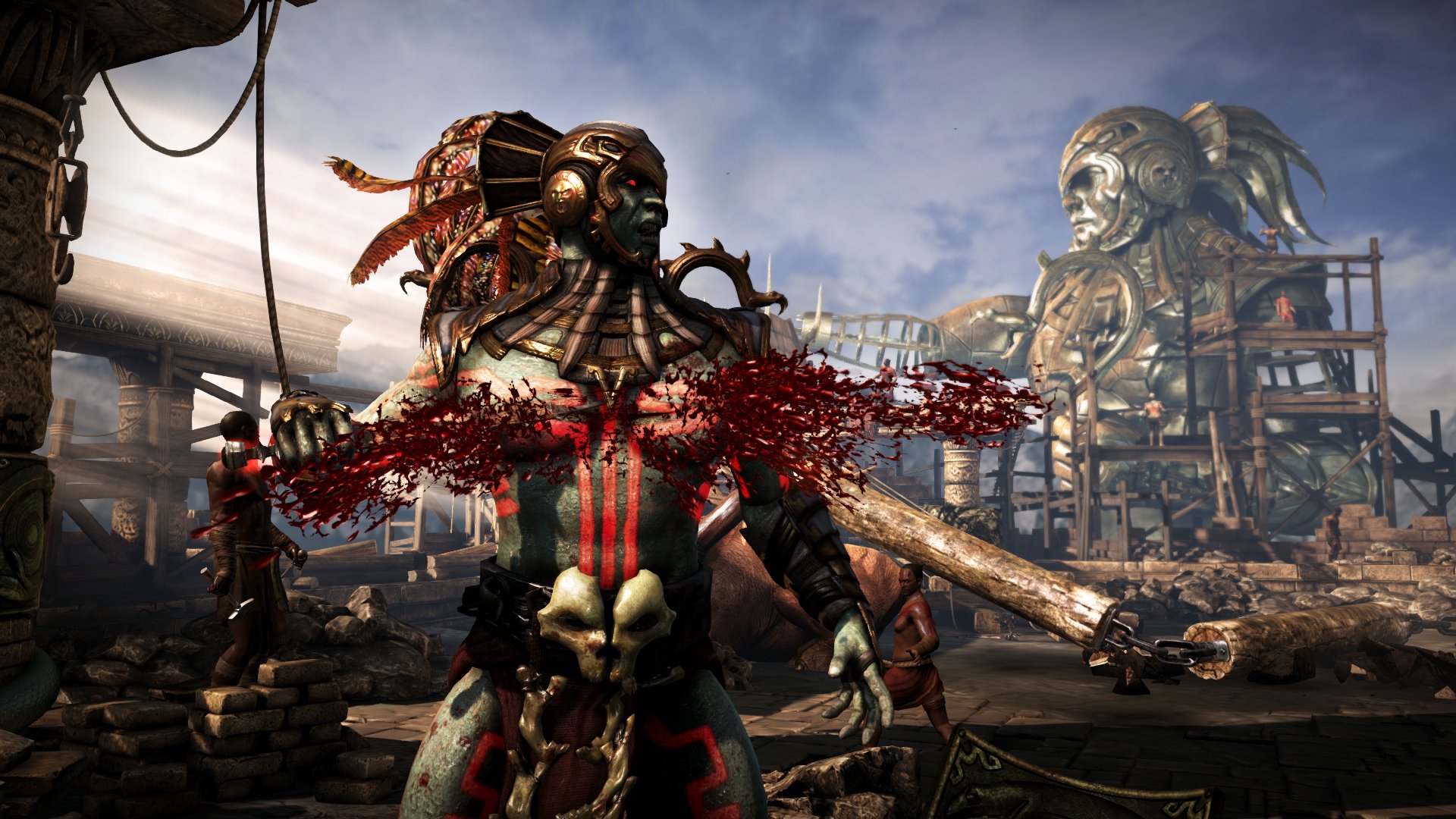 Large and in charge – physically and mechanically

Kotal takes up a lot of space. He’s one of the biggest characters in the game, a hulking tower of muscle and tattoos that makes a punk like Johnny Cage look like the “before” image in a Charles Atlas advertisement. With his golden feathered headdress and glowing tattoos, he looks every part the imperious warlord he’s supposed to.

But more than just how he looks, Kotal takes up a lot of room mechanically. For such a huge character, he is shockingly mobile. Kotal has an arsenal of forward-advancing normal moves that he can use to dart around the arena. You can be halfway across the screen, and Kotal will still be on you like a bad hangover with a quick shoulder check or dashing uppercut. There’s just no getting away from the guy.

On top of those advancing moves, he also has quite the selection of long-range normals to help him reach out and touch some internal organs. Those meaty legs aren’t just for show – Kotal can put the boot on his opponent or sweep them off their feet from the very edge of the mid-screen. Also, you wouldn’t expect it, but the big boy also has one of the fastest run speeds in the game. Let this be a reminder to never skip leg day.

A long reach, but a straight forward one

So Kotal has great pokes, but what’s the tradeoff? Well, it’s a doozy. Blood God Kotal Khan – emperor of Outworld, drinker of blood, and killer of Europeans – has no mix up. None. In a game defined by furious offensive blitzes and rapid fire 50/50 mixes (almost to an absurd degree), everything the great Khan is capable of can be defeated simply by holding duck and block in that order.

Not only does he have no way to really open an opponent up, plenty of his combo strings are unsafe and will leave him vulnerable if not cancelled into a quick recovering special move or spaced exactly right. This makes him a character dependent on exploiting mistakes and punishing whiffs. He might not be able to open you up, but if you slip, he’ll be right there to make you pay for it.

Kotal’s other variations are designed to help mitigate this weakness. War God gives him a huge-ass sword and a bunch of high/low attacks to help give him some variety. They don’t usually lead to huge damage, but they give him enough tools to threaten the opponent and force more costly mistakes. Sun God gives him a command grab that does respectable damage and makes being anywhere near him scary.

Blood God, on the other hand, leans into what makes Kotal a bad, bad man. 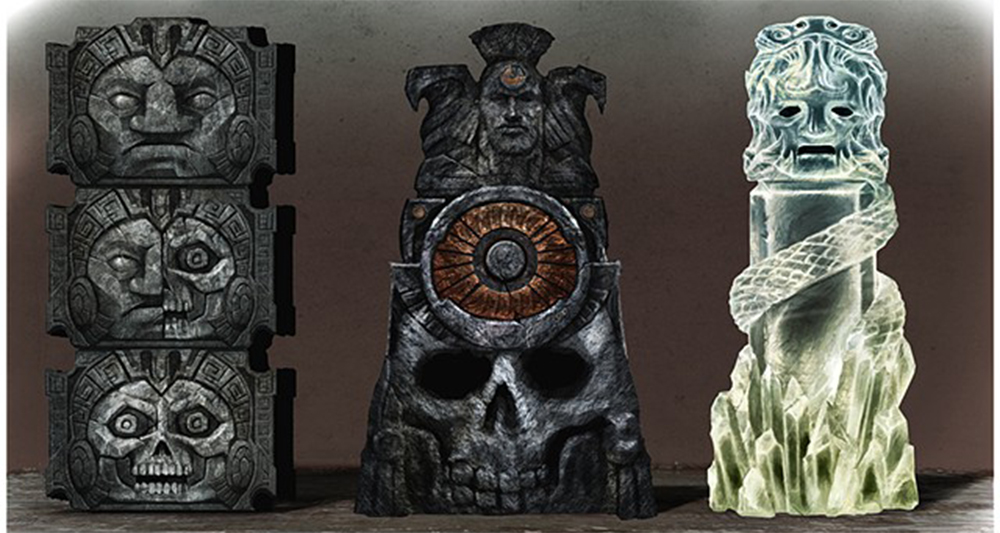 Rather than give him any way to open an opponent up, Blood God gives Kotal the tools to massively capitalize on any damage opportunities he gets. It also sets the opponent up to make more mistakes. How does it do this? Totems.

Blood God Kotal’s signature special moves are his Totems. Crystal, Obsidian, and Blood, they all help him do more damage and draw fights out.

Any time the Crystal Totem is out, Kotal gains a massive 33% damage bonus. As a character that already does great damage through fairly easy to execute combos, this is absolutely insane. With the totem, even a basic combo using one bar of meter can rip through 40% of a health bar. Yeeouch.

Of course, this isn’t Kotal’s only way to boost his damage. In Blood God he also gets access to his Mace Parry, a defensive move that will absorb a single grounded attack or projectile and give him a damage bonus for a few slim seconds. And he always has Blood Offering, a pain-for-gain move where Kotal will slice his own chest for 10% of his health to grant his next three attacks (on block or hit) a massive boost. All three of these bonuses can stack. 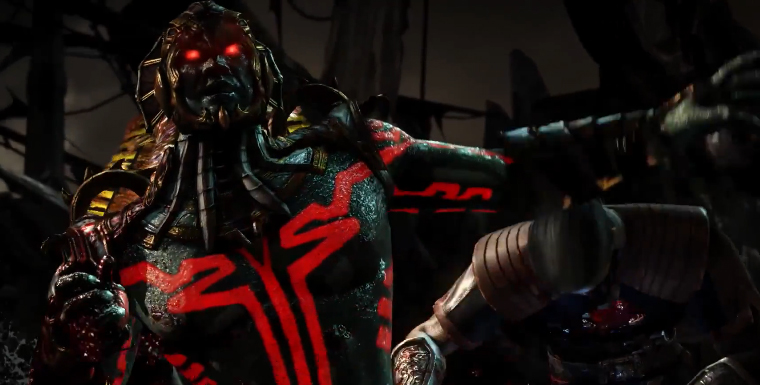 Now, I’m not in the business of fantasy fighting. I’ll be the first to admit that it’s VERY unlikely that you’re going to somehow have a Crystal Totem up, a Blood Offering on deck, and a perfect parry opportunity all ready to go at once (albeit super satisfying and the stuff of YouTube shares when it happens!), but, if you’re doing what Blood God is supposed to do, the chances of having at least one of these damage bonuses in play when you finally get a hit is fairly high. This means you only have to touch the opponent cleanly two or three times in a fight to seal the deal.

Then you also have the Obsidian Totem. This is the secret weapon of the variation. While active, it cuts damage received down by 33% while also increasing the amount of meter you get when hit or blocking attacks. This means all those big Liu Kang and Hellfire Scorpion block strings that usually chip away health bars like a jackhammer just tickle Kotal while giving him all the meter in the world to work with.

All that extra meter can be used for more breakers to further help reduce damage taken, and liberal use of extra EX attacks, including his God Ray special. The God Ray is a very unique move that creates an ambient beam of light on the screen that does a small amount of damage over time to opponents standing in it, or can be used to heal Kotal if he basks in it. Normally, the regular God Ray does too little healing to bother with and the other variations have to spend their meagre meter on other things. But not Blood God. Blood God is positively swimming in meter, so why not call down a few EX God Rays and heal up during the match?

In a pinch, you can even break out the Blood Totem, which provides a vampire effect that transfers damage done to the opponent to health and meter for Kotal. Cool idea, but I’d be lying if I said I used it very often. The bonuses of the other Totmes are too good to pass up.

A boss character in the flesh

What does all this tankiness and recovery add up to? Boss mode. Simply put, when you do well with Blood God Kotal Khan, it feels like playing as an unfair boss character. You can do so much damage per hit, and survive so much punishment, that the opponent is always on the back foot. He’s just So. Damn. Tough.

There are few things more satisfying than shrugging off a full combo that cost your opponent a bar or two for 20-25% damage and then chasing them down for a devastating 40% plus mud-stomp. Kotal is capable of swings no other character can pull off in MKX, and that feels great…

The big thing that makes playing Blood God Kotal Khan frustrating, and why you don’t see a ton of him at a high level (with the exception of the talented PND Madzin) is because it’s so easy to prevent him from working any of his magic. All the good pokes and delightful Totem bonuses in the world don’t mean anything when you can’t get off the ground or make enough space to use them.

In addition to having no mix-up, Blood God also has no reversal move. While fantastic in the neutral game, Kotal is so easy to overwhelm once you get in on him that he just doesn’t represent a threat. With no armoured reversal to speak of and a parry that is only good against a single hit and is slow to activate, Kotal can’t shake highly aggressive rush-down characters. This would be a problem in any game, but in MKX where the best characters are defined by their ability to smother opponents with unending pressure strings and high/low mix-ups, it’s a fatal liability.

If you never get the chance to set any Totems up or build some momentum, Kotal goes from “unstoppable boss character” to “gimped P.O.S.” pretty damn quick. He’s a character for players who like to experience soaring highs and desperate lows. A character who somehow feels both high-tier and low-tier depending on the match. In all my years playing competitivemultiplayer, I’m not sure I’ve ever used a character so prone to wild swings in either direction. Maybe that’s why I can’t seem to give up on big blue.