Curiosity killed (in) the cat(acomb)

Ask someone why they chose something, anything – from what type of sandwich to eat, to who they voted for in the last election – and chances are their reasoning will boil down to one statement “It felt right.” We may like to think that we’re rational, logic-driven animals, with full access to free will, but fact of the matter is, we’re largely directed by an emotional compass that points us towards doing whatever makes us feel good.

Below is designed to make our various internal compasses point in multiple directions at once, without us even being aware that we’re being psychologically drawn and quartered. The urge to survive, to dominate your enemies, to hunt and gather for cool stuff, to see what kind of bizarre monstrosity might be hiding around the next corner are all at play at the same time. Committing to one of those drives while abandoning the others will surely lead to regret. Balancing them all, while being prepared to start all over again at any time, is the only way to make it to the end.

Creating Below has led its developers to walk a similar path. In 2013, they were committed to the game’s flat 2D art style. That’s where their compasses pointed them, and they were confident it was the right direction… until some time passed, and they began to further chisel away at what they wanted from their work. As they changed as artists, so did their feelings about what they were making, which led their compasses to point them toward a deeper, 3D look, as well as further changes to the underlying systems at play in the treacherous world they were building.

Now, many iterations later, Below should be ready to release this year. It’s a game that took years of patience, hard work, and a leap of faith to create, it asks the player to do the same at every turn. 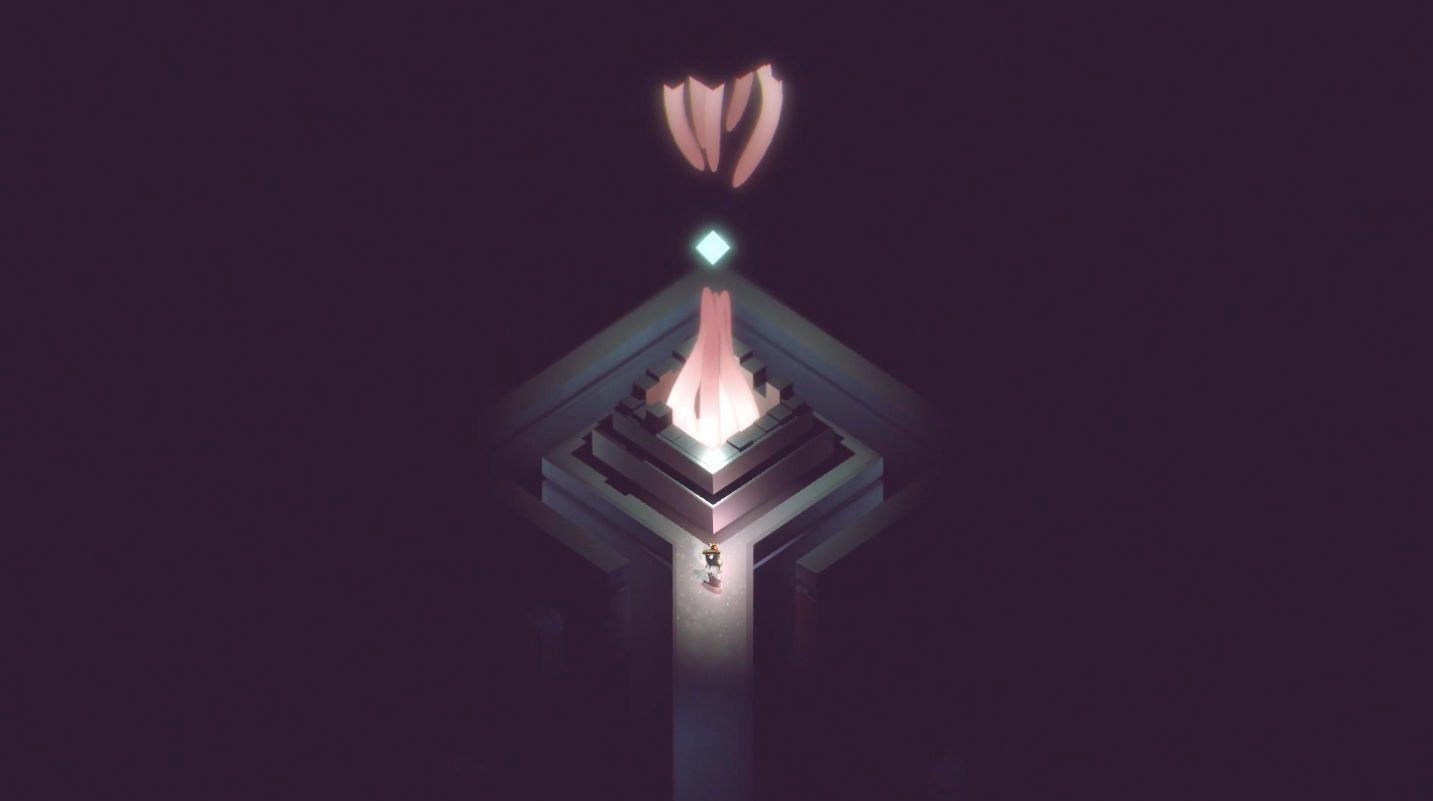 Like Capy’s Sword and Sworcery, Below stars an initially faceless protagonist who comes adorned in plain, but fashionable, garb. The game also has a soundtrack by Sworcery‘s Jim Guthrie. I asked Capy is the two games were related. They told me that at one time they considered adding a direct connection between the two games but, in the end, they decided to keep any relationship between them unspoken.

So while it’s not an official spinoff or sequel, I’m 100% certain that Below fits more into the Sworcery side of Cap’s library than the corners set aside for Super Time Force or Critter Crunch. Both games are methodically paced, have sword and shield combat at their core, and work to make the environment the secret star of the show. If anything, Below feels like an outgrowth from Sworcery, with Capy asking themselves “How can we make a game that fills players’ minds with even more mystery, danger, and an authentic sense of place than Sworcery did? How can we let people get even more lost in our world?” 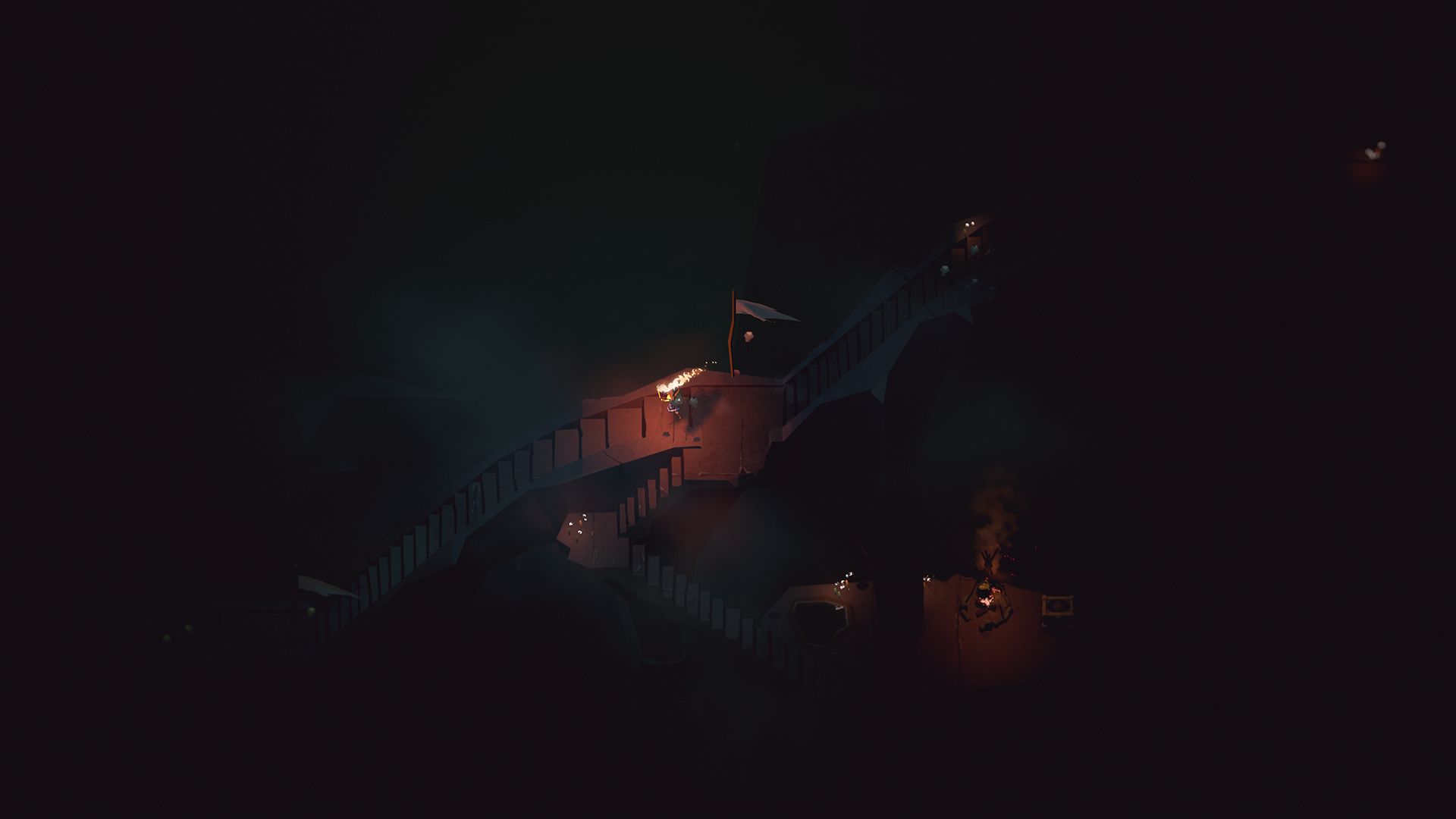 In fact, Lost might have been the perfect name for Below, had it not already been taken by another cryptic adventure story from a few years ago. That said, you always have some concept of where you are. The game is largely procedurally generated, though every run will share some key landmarks with others. This leads the player to feel like they almost know where they are, most of the time, without ever letting them feel completely sure. That feeling only makes you hungrier to fully explore everything in Below, as it always feels like you’re maybe almost there, even if you have no idea what “there” is.

That excitement to see what’s in the next room is what killed me the most. “Just one more room!” my brain would shout, totally drowning out the “Hey, that red crystal monster just stabbed you, don’t you think you should find a fire to cauterize your wounds before you go forward-flipping through that mysterious doorway?” 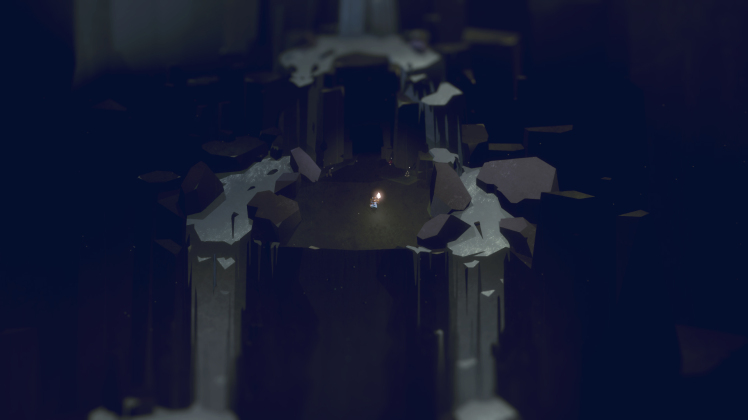 Part of this lack of concern for my personal well-being is inspired by how little Below focuses on the player character. They take up about 1/30 of the screen most of the time, and that’s being generous. The user interface is almost totally clean, with just a heart showing your health, or a crystal showing your collection of currency. There are hunger, thirst, and blood loss meters running at all times too, but you won’t notice them unless you make the effort to.

Instead, your eyes will be drawn to the beautiful world around you. The deeper you go into Below, the darker that world gets, with many hidden treasures and traps potentially waiting in the darkness. When asked to choose between lighting up that world or stopping by a local fire to mend your wounds, it’s easy to be sucked into the mystery, at the expense of more responsible pursuits. 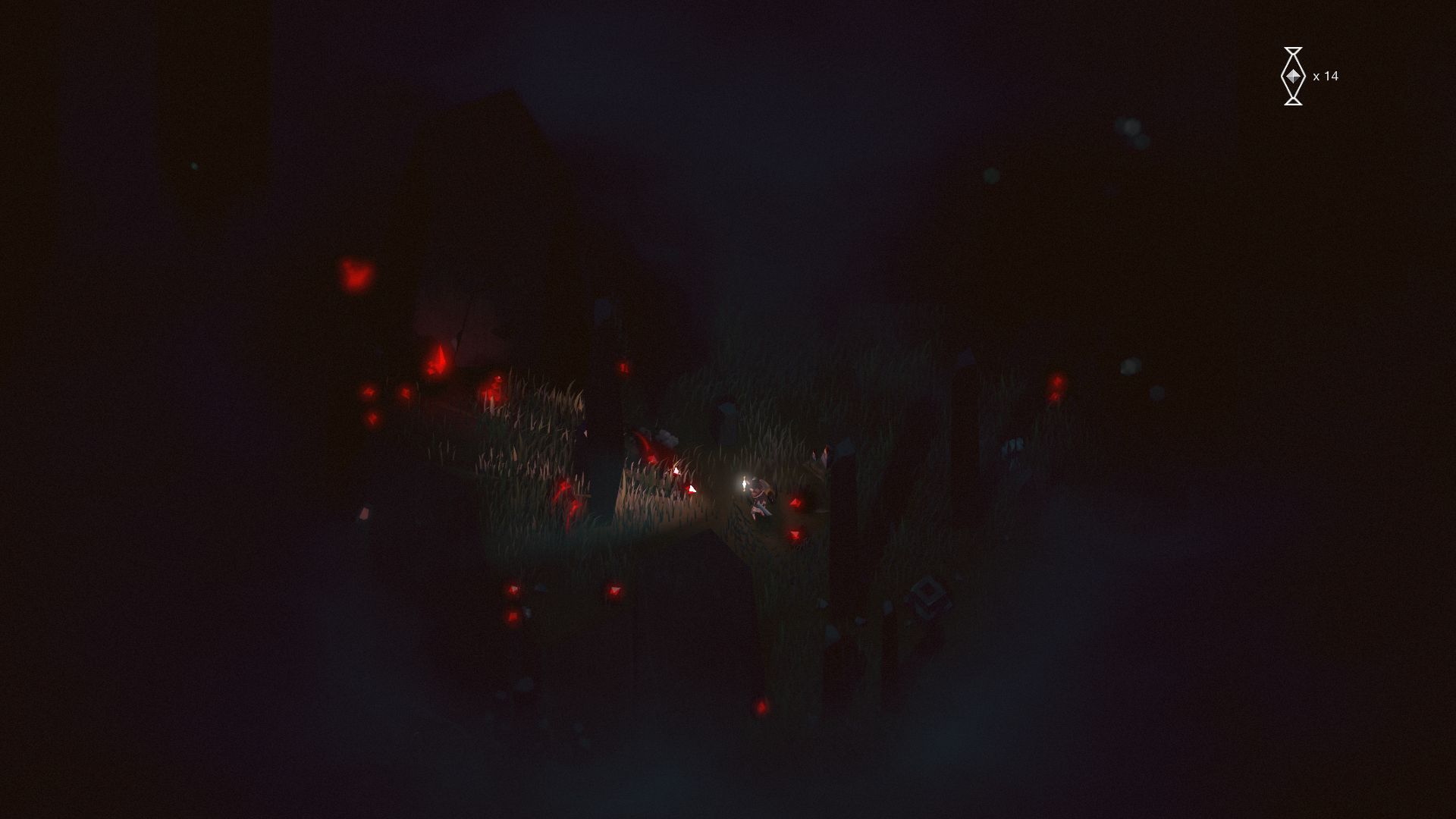 Sometimes the game feels like a cautionary tale, tempting the player to look before they leap, then comes crashing down on them with severe consequences for not planning ahead. After working on the game for more than five years, it’s certain that Capy has been plenty cautious with their own approach to Below.

With the resources they’ve put into it so far, they could have released two or maybe even three versions of the game along the way. But they didn’t. They took their time, stayed reflective, and did what they thought would help them meet their long term and short term goals at the same time. If you’re interested in playing a game that asks you to do the same, then you’re going to love Below.