In most large studio environments, a finished project is generally followed by an attempt to push the envelope further. Instead of embracing that period and finding new ways to play and interact in the medium, developers make something with bigger setpieces, better graphics, and more believable animations.

I’ll be honest: though Ready at Dawn didn’t set the world ablaze with The Order: 1886, I fully expected the team to revisit that universe with… bigger setpieces, better graphics, and more believable animations. When I received an email inviting me to the studio see their new “third-person smash ‘em arena combat game,” my left eyebrow raised high enough to kiss my widow’s peak.

And I certainly didn’t expect it to be about little dog-chew-toy-blobby-things destroying one another. 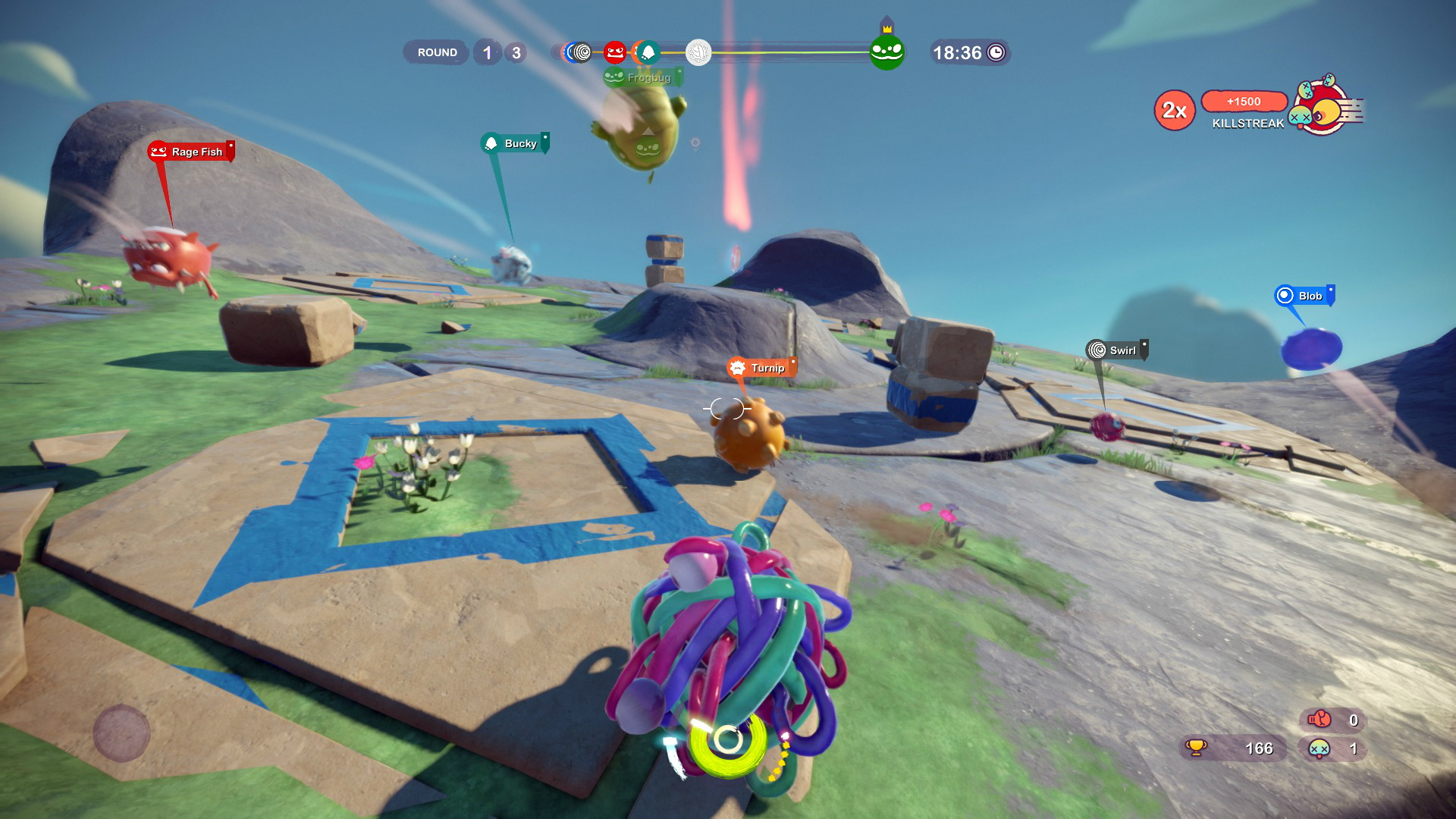 I am a Bad Dude, so I had to maintain my reputation and show up to the event a little later than I intended. As such, I missed the introduction and explanation of the new game, and only was able to discern what I was about to play by looking at small banners and posters all around me with the name Deformers triumphantly emblazoned across them. I was handed a controller and told that I’d have a brief chance to acclimate to the controls before the Quality Assurance team wrecked me.

“Uh. Alright,” I said, quite impressively. Playing as a sort of noodly-ball thing that looked like the result of a lover’s tryst between spaghetti and funfetti cake, I was given the basic rundown of the controls. Using the same physics engine as The Order, I was tasked with trying to eradicate all of the other sorta-kinda-Angry Birds looking players. My abilities included a ram attack that could be charged up, a shot attack using ammunition called ‘Tribs’, a block button that could parry ram attacks if timed correctly, and a toss button to counter blobs that tried to block myattacks.

The first level we tried this on was a dusty, desert-liciousfloating arena that had halfpipes and hills across the top. I was wrecked almost immediately, but I was not deterred. I started rushing to the power-ups that would spawn into the arena to get an edge since I didn’t have the same handle on the game that the QA team did. Blast pick-ups allowed me to use a small area of effect attack that knocked my enemies off of the platform, which they could then counter by using the charge ability to propel themselves back in. The Magnet power-ups attracted extra Tribs to me for more ammunition, and Rampage turned me into a blobbernaut capable of destroying anyone who was foolish enough to approach me. 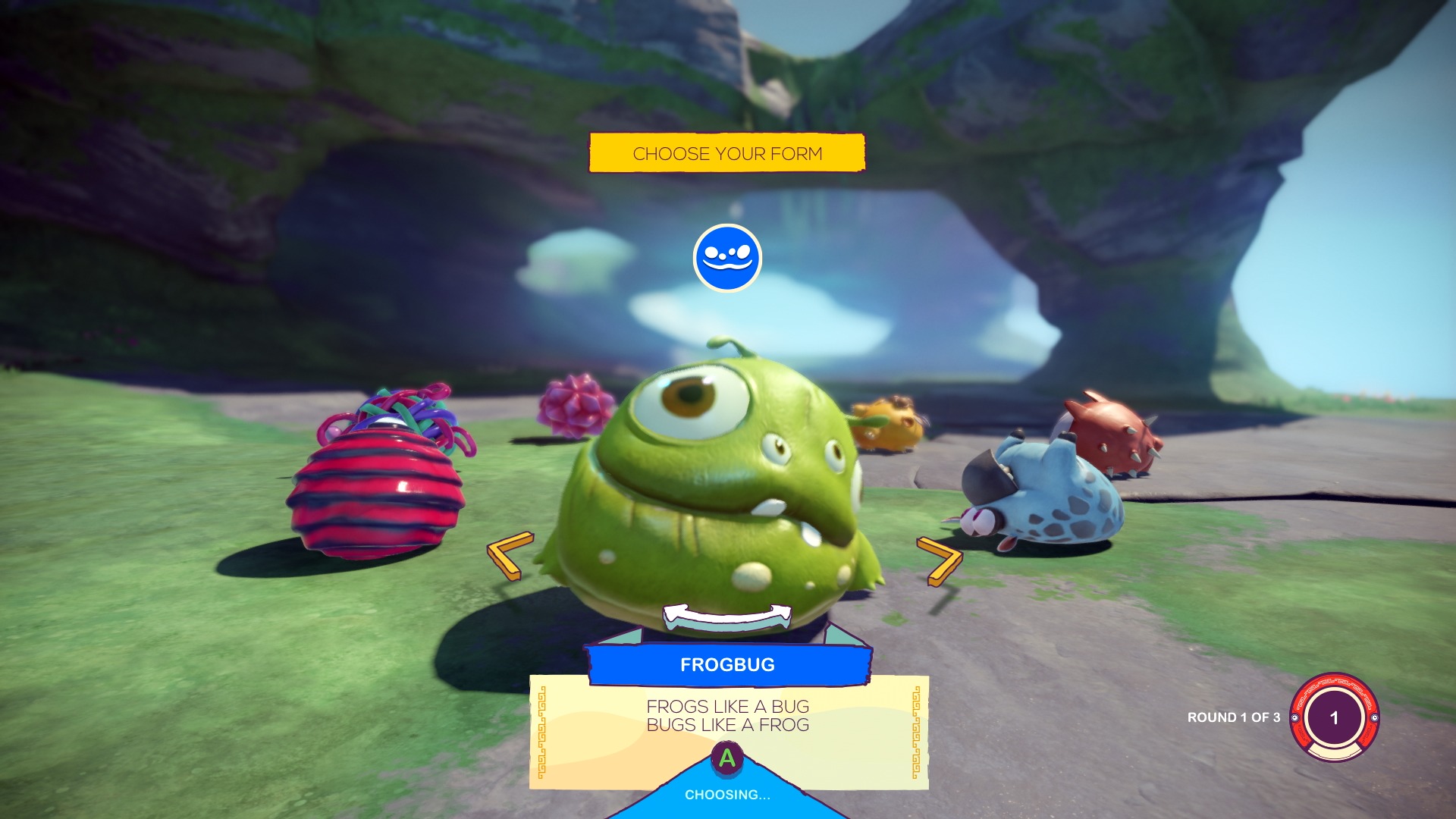 A sense of tactility helps give Deformers an identity other than Murderous Marbles Madness. Another stage that we played on was a constantly-tilting platform that seemed to move with the player’s weight. The sense of momentum I could achieve while trying to knock my opponents was satisfying and has that “sticky friction” that the track-suited Tim Rogers has the gift of describing. At this point, I felt this could be a fun game… but I’d probably never pick it up again after this event. A more complicated map and moving from deathmatch to team deathmatch changed my mind.

Prior to this point, the stages I battled on were all relatively simple, even with ramps, half-pipes, and tilting. The third level was multi-tiered, and it was much more fun. When the opposing team tried to knock me off the top, I was able to propel myself back to life by landing in a lower cavern. Rolling deep into a level with teammates also led to some entertaining strategies. Though we weren’t speaking to each other (it was a room full of people who write about games, we’re not the most sociable [or maybe I am projecting and I’ll just die cold and alone]), we would congregate in small flocks and try to defend places that we though power-ups would spawn.

As we slowly learned how to properly parry, we came out on top, and I even had the most kills and the fewest deaths. Bite me, QA hit squad. Or, you know, they went easy on me to indulge my ego.

Deformerslooks great in motion, even if the art style isn’t immediately compelling. It has a clear visual language that makes it easy to interpret what you’re up against at all times, even when it becomes chaotic. I’ll be curious to see how they’d market DLC for this new game to keep it interesting over time, becauseI do think it’ll live or die based on how well-supported it is when it comes to maps and game modes. At the moment, it supports eight players and has the three maps we were shown. I’d love to have settings that enable me to tweak gravity, traction, power-up frequency, and other such modifiers per map too.

Also of note is that Deformers is the second game that the GameTrust Initiative (that would be “Not a publisher” GameStop’s publishing company) is putting out there, with Song of the Deep being the first. There’s no release date as of yet, but it’s “coming soon” to PC, PS4, and Xbox One.