The Division 2's second raid gets filibustered into 2020

But Title Update 6 is right around the corner

The Division 2‘s first stab at a raid didn’t go entirely smoothly. The player base was (literally) divided because Ubisoft insisted on preventing matchmaking for people who couldn’t put together a full eight-person squad. Also, the raid was nearly impossible on consoles. Ubisoft eventually addressed both of these problems.

Ubisoft doesn’t want a repeat performance with its second raid. Originally scheduled to launch before the end of the year, the second raid has been pushed back into 2020. Ubisoft says “The extra time for our teams will help ensure the second raid not only meets our standards, but yours as well.”

There is new content on the horizon, however. Title Update 6 goes live next week, which brings Episode 2 of the free main mission story DLC. In Pentagon: The Last Castle, players are tasked with purging the Black Tusk from the Pentagon.

Everyone will eventually get access to Title Update 6, but not at the same time. People who own the Year 1 Pass get everything on October 15. Everyone else has to wait a week until October 22. And the entirety of the Division 2population has to wait until 2020 to grind through the new raid.

An Update on The Division 2 [Ubisoft] 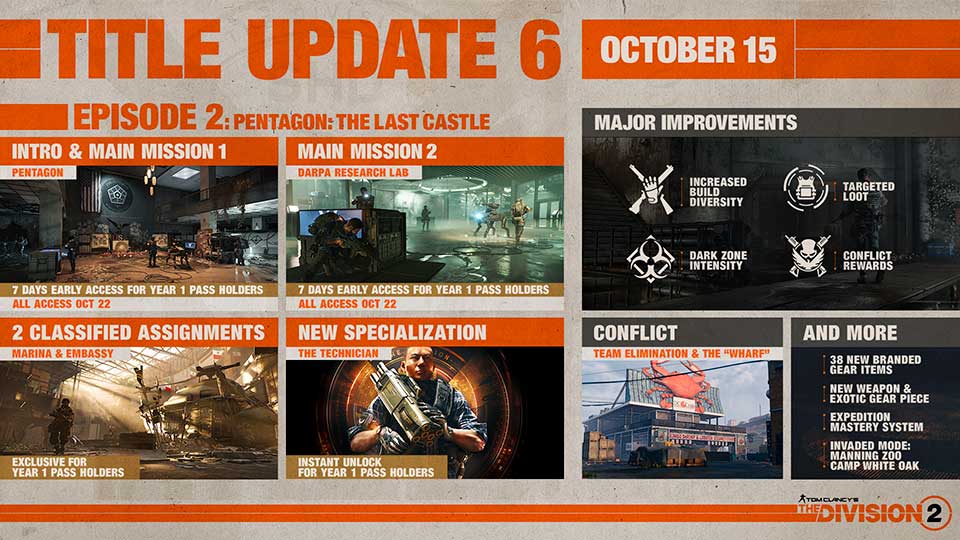