Xenomorph Football League, the only XFL I want

The xenomorphs and the Predator race have been at war for quite some time, now. Centuries, it seems. They’ve duked it out in comics, video games, cinema, action figures, and the imaginations of nerds everywhere. But man, all that fighting sure it tiresome.

As it turns out, conventional warfare between the two species just wasn’t getting the job done. For every Predator that takes out a couple of xenos with a well-placed shoulder cannon, five more pop out of some C-level actor’s chest just trying to keep his SAG insurance going another month. War is the ultimate war of attrition.

These two cosmic nuisances require far more than punches and rockets and acid blood to settle their differences. What they need is the ultimate test of skill, grit, determination, and will. They need American football. 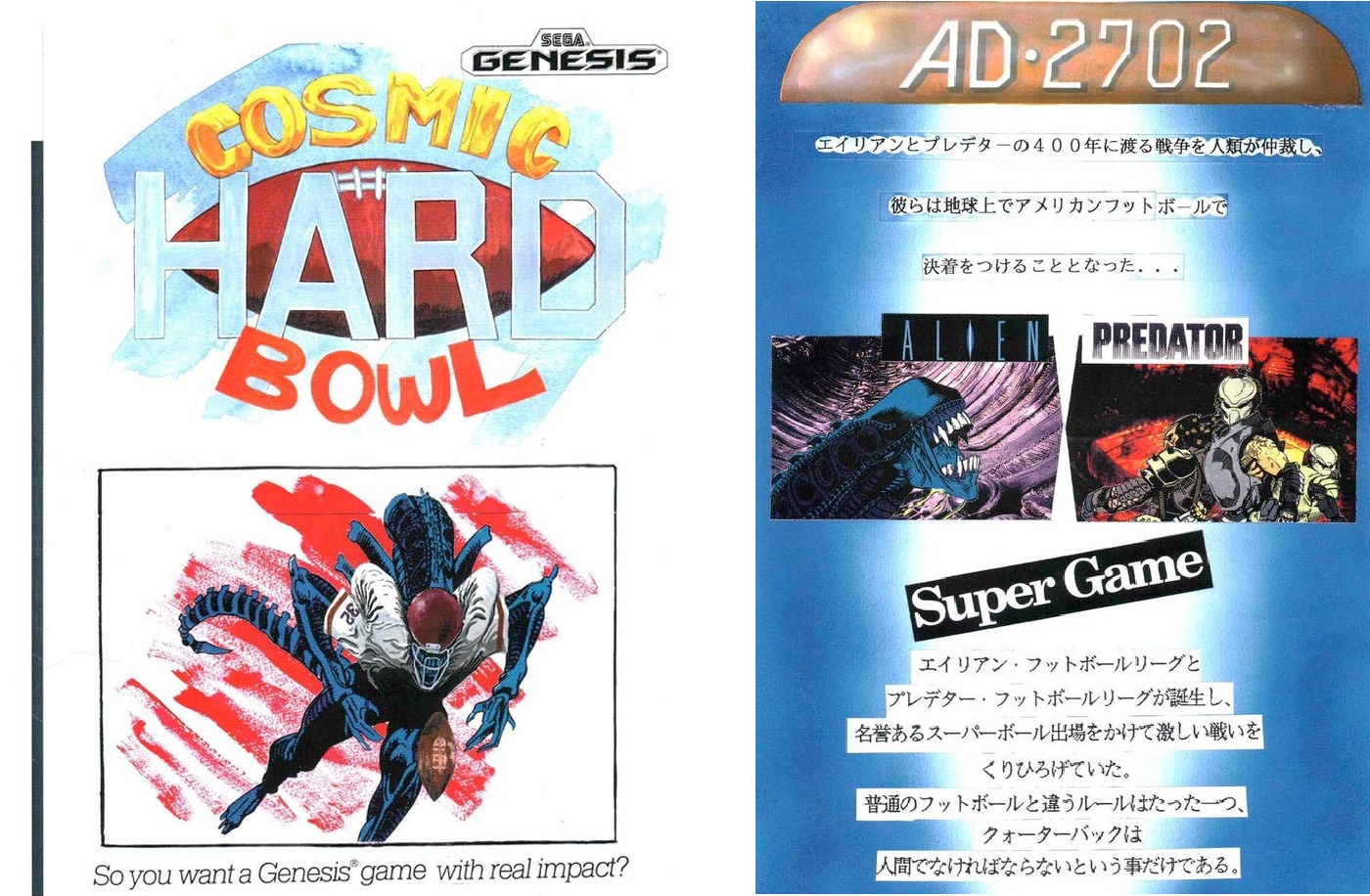 According to some info dug up and translated by the National Videogame Museum, a wonderfully ill-conceived football game for Genesis titled Cosmic Hard Bowl(barf) made its way around Sega offices sometime back in the ’90s. From the concept art it seems that the premise revolves around Aliens and Predators battling each other in American football (for no reason other than it was a ’90s video game) in the year 2702. Not like, super violent space football or anything. According to the pitch, there’s only one new rule: Teams must be quarterbacked by a human.

So you’ve got Aliens, who bleed acid and impregnate other species via the face to procreate, on one side of the ball; Predators, who have space dreadlocks and shoot fucking lasers out of their shoulders when they’re not busy blowing themselves up or ripping off your skin, are on the other side. Now, in the middle of it all, you have Kirk Cousins who’s wondering where it all went wrong.

At least Colin Kaepernick could probably get a job in this league. 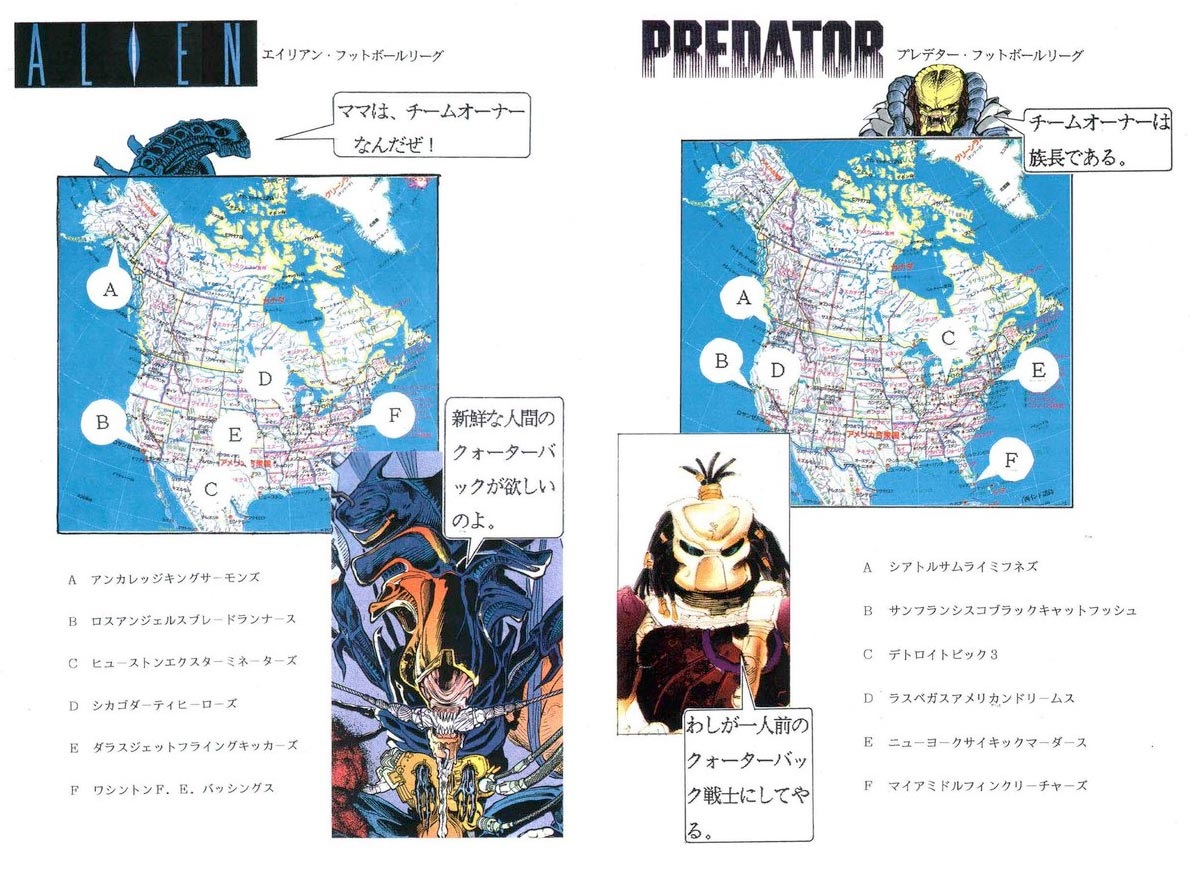 Lest you think that this event is some half-assed primetime special meant to draw in bored Alabamans on a Monday night, think again, buster! This ain’t no one-off game; no, it seems there’s an entire league based around space creatures playing a sport more or less exclusive to one continent. Each race has its own six-team league. The Aliens sport the Anchorage King Salmons, the LA Blade Runners, Houston Exterminators, Chicago Dirty Heroes, Dallas Jet Flying Kickers, and Washington D.C. Bashings. The Predators support the Seattle Samurai Mifunes, San Francisco Black Catfish, Detroit Big 3, Las Vegas American Dreams, New York Psychic Murders, and Miami Dolphin Creatures. These are all great names, and while they’d have likely changed in localization, I would have staunchly protested that decision.

Never mind the fact that the concept art shows the alien races wearing football gear, that having a team in Alaska is the least practical thing on Earth in terms of travel logistics and sport pragmatics (fucking seriously, the Predators have mastered intergalactic travel but don’t see why playing a mostly outdoor sport in a place covered by snow would be a nightmare for fans, teams, owners, and basically everyone involved?), and that having a human compete with two species that could maim, dismember, or even kill him with one false move would not only be a bad idea, but also likely result in an incredibly shitty QB performance every game.

No, don’t think about how any of this would work. Just be glad you live in a world where there’s at least a slight chance that this could have come to fruition. I truly love the ’90s.

WTF: An ‘Alien vs Predator’ Football Video Game Was Once in Development for SEGA Genesis [Slash Film]